View source
watch 01:36
We're Getting Mutants in the MCU - The Loop
Do you like this video?
Play Sound

Yū and Kotomi arrive at Tomoko's home. Yū rings the bell, and Tomoko responds on the speaker that she will come down. The side narration reads: "Yū-chan and Kotomi-chan come to Tomoko's home with the goal . . ."

When Tomoko opens the door, Yū presents her with cake from her uncle's store. Tomoko thanks her and replies that they will eat it together later. She then looks at Kotomi who stares back at her sweating. "You didn't bring anything, right?" Tomoko concludes. As they leave their shoes, Tomoko continues to sarcastically note that she did not expect Kotomi to bring anything while declaring that it would be annoying if she did since she would have to think about what to give her in return.

As they sit at a table in Tomoko's living room which includes a spot for her stuffed toy, the caption for the title page reads, "Third years study, study, study!" Tomoko announces that they should begin studying together. After some time, Tomoko asks Yū if she has study groups like this. Surprised, Yū replies that she has never had such a study group. She confesses that she does not do it much, and when she joined friends before a test at a family restaurant, they helped each other through areas they did not understand. She then admits that her school is not as strong as Tomoko's.

Kotomi adds that she also does not have a formal study group. Before a test she Skyped with a friend. Kotomi flashes back to a Skype study session with Hikari Itō. She declares that alone one may fall into temptation but by watching one another they will remain focused. However, Itō hears that Kotomi is listening to a baseball game as she cheers on Nakamura Shōgo. Eventually Kotomi, who apparently does not know Skype contains a speaker function, thinks out loud that she wants to lick the dark circles under Tomoki's eyes (智貴くんの眼球と隈舐めたいなー・Tomoki-kun no gankyū to kumanametai na-)!

Returning to the present, Kotomi confesses that sometimes when she studies with Itō she becomes relaxed and starts humming or will "blurt out embarrassing stuff." Yū happily declares that Kotomi must have a really nice friend if she will watch her for such a long time. Inwardly, Kotomi questions that phrasing. Tomoko asks Kotomi if, basically, study groups consist simply of getting together and watching one another study. Kotomi responds sheepishly, "well, partly."

Tomoko continues that since she has focused on literature she can abandon the science especially since she cannot coast through science by just memorizing. Surprised, Yū reminds her that college entrance examinations cover all subjects. Tomoko replies that for the private school she is interested in, she simply has to test in three subjects from English and Japanese history for their liberal arts department. Yū admits that she did not know that, and Tomoko signals them to get back to studying.

They study until 2:01 P.M. when Kotomi checks her baseball team on her phone and asks if she can turn on the television for a moment. As the announcer explains that her team has the bases loaded, Kotomi laments that Lotte never hits in such a situation. The announcer laments that Lotte has struck out and squandered an opportunity, and a resigned Kotomi returns to the table to resume study.

Yū looks at Tomoko's calendar and notices the names on the dates. Inwardly, she knows Yuri but wonders who "Nemo" and "Katō" are. She remarks that Tomoko has gone on university visits and asks her which ones she has visited. Tomoko replies "Morinagata University (森永大学・Morinagata Daigaku)" and "Aogaku (青学・Aogaku)," then noticeably changes the subject that since it is 3:00 P.M. they should have tea and some of Yū's cake.

After Tomoko leaves, Yū asks Kotomi what type of person Nemoto and Katō are. Kotomi thinks for a bit on Nemoto, then remembers seeing her at lunch. She responds that Nemoto is an aspiring voice actress "with a flashy hairstyle (派手な髪型・hadenakamigata)." As for Katō, Kotomi admits that she has never spoken with her, but she seems a girl into trendy fashion (ギャル・gyaru). Yū remarks that Tomoko has a lot of friends. Kotomi admits that this is surprising. Kotomi then adds that she saw a "pig - I mean girl" with Tomoko when she ran into her the day before yesterday.

The three enjoy their treats as Yū beams with anime sparkles. Tomoko puts on a golf video game and suggests that they relax playing "a few friendly games." She then suggests a penalty for the loser. If Yū loses, she gets her breasts massaged. If Kotomi loses, she will pack up and leave immediately to never, ever, return. Kotomi angrily asks what happened to "a few friendly games." As she watches Yū play, Tomoko confesses that she never saw herself as an athlete, but she would not mind playing golf since even women can make good money. With "e-sports," she continues, one can start playing and become a top player immediately. While she concedes that it is probably too late for her to become "one of the world's best" e-sports players, she thinks she could become a popular streamer at least, which Kotomi doubts.

The three return to studying. When Tomoki returns home, Kotomi sweats: "I'm in the same house as Tomoki-kun right now! We're practically in the same clan now! Which means we're basically family!" As Kotomi blushes and hyperventilates, Tomoko suggests that they call it a day even though it is early and over Kotomi's protests.

Tomoko offers to walk with them for a bit then adds that she wants to show Yū something. At the nearby park, she searches around the benches until she finds a cat. As she and Yū plays with the cat, Tomoko remarks that a few days ago she saw a dog which stuck its head up the skirt of a "delinquent" she knows, who responded by punching the dog. She then notes that she was the same delinquent that Kotomi angered then received a punch in the stomach from. Tomoko admits that she has been punched a few times herself. When a shocked Yū asks if she is being bullied, Tomoko confesses that the unnamed Yoshida "just doesn't like it when I sexually harass her . . . unlike you, Yū-chan." When Yū asks Tomoko what she did to her, Tomoko offhandedly replies, "Oh, just groped her bare breasts." When Yū asks if they are friends, Tomoko admits that she is not sure. She notes that since the unnamed Yoshida does hang around with the two girls, Tamura and Tanaka, whom Yū has met, they seem to end up together often.

As they continue their walk home without Tomoko, Yū remarks to Kotomi that Tomoko use to never talk about school. She then asks Kotomi if she can join her study group. She explains that while she knows that she is not that smart she wants to attend the same university as Kotomi and Tomoko. When Kotomi asks her why she does not simply study with Tomoko, Yū responds that she has the feeling that Tomoko may want to study with her other friends. Kotomi jokes that, unlike Tomoko, since she has no friends she is always free. Yū stammers an apology, but Kotomi assures her that she was joking and will send her an invite to her Skype group with Itō.

A few days later, Yū joins with Itō and Kotomi in a Skype study group. After some time, Yū and Itō hear: "I wish I could be Tomoki-kun's older brother." The side narration reads, "It's time to unseal her powers of perception!"

WataMote Wiki does not judge. 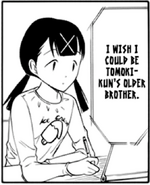