This chapter continues from the previous and is divided into sections.

The side narration reads, "I met on a crowded train . . . who?!" Tomoko rides the crowded train to school. Inwardly, she complains that the train will be crowded again that day. As the train shifts, Tomoko falls onto Miyazaki, embracing her. They both give an awkward, "good morning." Stuck in the position, Tomoko grouses that it is the most awkward way to have an encounter that she really does not want to have. For her part, Miyazaki notes that she cannot ignore Tomoko since she is "Ucchi's friend," but she really does not know her.

Sweating, Tomoko stammers the observation that "it's really crowded today." Miyazaki sheepishly agrees while she thinks that she really misses Uchi. To herself, Miyazaki notes that she normally does not notice Uchi when she is around, but now knows she needs her since they recently have not been together since they have not been getting along. Uchi's "Emoji Smile" appears over the train as Tomoko thinks, "Emoji!" and Miyazaki thinks, "Ucchi!"

Uchi stands on the train platform. Uchi recognizes the arriving train is Tomoko's and wonders if she or Miyazaki is on it. She sees, to her shock, Tomoko apparently embracing Miyazaki.

After the title page which depicts Uchi, Katō, Kaho, Suzuki, Yoshinori, Kotomi, Tomoki, Yuri, Hina, Akari, Sayaka, Itō, Mike, Kakkun, and Koharu Minami arriving, Hina sits with Okada when Katō comes to her and asks if she can speak to her for a moment.

Outside the classroom, Katō pleasantly, but firmly, asks Hina if she caused Tomoko's black eye. Hina admits that she did but insists that the reason is not what Katō thinks. Still pleasant and firm, Katō suggests that Hina will not mind when she asks Tomoko her side of the story. Smiling, Hina replies that she does not, but since the reason is a "secret," Tomoko may not tell her.

Still smiling, Katō stands with Tomoko in the hallway. Tomoko looks up to her sweating a bit. Hina listens in from around the corner, but can only hear Katō speak. Nevertheless, she is sure Tomoko will not reveal why she hit her until she hears Katō repeat outloud that Tomoko saw Hina's private parts, using the clinical term.

Itō turns a corner in the hallway and encounters Tomoki who greets her. She apologizes for Kotomi's previous behavior in the cafeteria. Tomoki thinks that "this person" (この人・kono hito) is at least sane, and he asks her what type of person Kotomi is?

Itō responds with a very detailed flood of information which leads Tomoki to conclude that she is also insane.

An agitated Sayaka slams open the door to Akari's classroom while shouting her name. She announces that she observed Tomoki talking to "some random upper classwoman." When Akari asks her why she is worried, Sayaka screams back that Akari is finally in his classroom. She then reminds her of rumors that Tomoki "groped" another upper classwoman. As the other students in the class stare at them, Sayaka screams that Akari should not be worried that she told Tomoki that she wished a viewing of his unmentionables which an enraged Akari interrupts.

Minami sits bored and dejected that she has no one to spend lunch with. Mako appears to have run off, and she fears that if she keeps leaving her class to eat with a Sacchi, everyone will know that she has no friends.

She spies the Girl with Braids sitting in front of her. She believes that her name is "Mike" and that she has a boyfriend. When Minami invites her to join her for lunch, Mike beams and asks if her boyfriend, who stepped out for drinks, can also join them.

Tomoko eats lunch outside with Yoshida, Mako, and Yuri. Mako sheepishly confesses that she often makes lunch for Yuri but decided to make more for them as well. Yoshida compliments Mako while chewing, and Tomoko jokes that she might as well try the food. She then thanks Mako. Yuri reaches for some of the food without saying a word. Tomoko wonders why Yuri does not thank her.

Mike offers Minami a taste of her spinach and burdock creation. While she hates both, Minami rationalizes that if she praises her food, she can become her friend.

Minami finds herself in the bathroom desperately trying to vomit the sick sweet concoction so she can run off and tell others how bad Mike's food is.

Back in class, Hina asks Yuri if she hits Tomoko often since Tomoko claimed that she was good at it. Yuri protests that she has only hit her once while a moaning Minami lays her head on her desk which Futaki, who sits next to her, notices.

Hina continues by asking why Yuri hits Tomoko. Yuri sheepishly cannot give a reason. Hina smiles as she inwardly suspects that Tomoko has done something like sneak a peak at Yuri's panties twice.

Yuri later walks home with Tomoko who is looking at her phone. Yuri asks her what she is reading, and Tomoko explains that she has extra "HP," or digital manga reader's currency, which allows her to read manga online.

When they reach the station, Tomoko realizes that she has ignored Yuri. She tells the leaving Yuri that they can sit for a bit and talk. She then loads the manga reading application on Yuri's phone so they can both enjoy reading. She then blushes and suggests that Yuri enjoys ecchi which Yuri denies.

At home while studying, Yuri finds that as a new subscriber, she has extra "HP" which allows her to read a number of manga on her phone.

The next morning, Yuri walks reading manga on her phone while discovering that her "HP" will refill every 6 A.M. and P.M. Tomoko catches up to her from behind and, blushing and sweating, declares that she knew Yuri would like ecchi. While Hina also approaches, Yuri protests that that is not the reason she is reading it. Tomoko insists that the artwork is the only good thing about the series, but Yuri continues to protest. When Tomoko declares that she does not have to be embarrassed and is after all "a closet pervert," Yuri interrupts her by punching her in the shoulder.

Hina inwardly deduces that it is okay to punch Tomoko in the shoulder.

The side narration insists that it is not actually fine to hit Tomoko.

Uchi calmly reacts to seeing Tomoko and Miyazaki together. 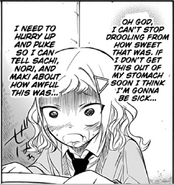 Minami's Priorities
Add a photo to this gallery

Retrieved from "https://watamote.fandom.com/wiki/WataMote_Chapter_145?oldid=15964"
Community content is available under CC-BY-SA unless otherwise noted.