As school ends, Tomoko packs up her things and thinks of returning home. Two unnamed male students notice that it has started raining. Hina notices the rain outside the window as Yuri rises from her seat. Katō asks Tomoko if she brought an umbrella. Tomoko sheepishly responds that since the report said it would not rain that day, she did not bring one. Katō muses that since it looks like shower will pass soon, they can kill time studying, which surprises Tomoko and Yuri.

The cover depicts Katō leading Tomoko down a flight of stairs with Yuri following. The caption reads: "Everyone's killing time by studying. . ."

Katō takes them to a study room filled with students in individual carrels, and Mako enters behind them. Tomoko muses to herself that after three years this is the first time she has entered the study room other than for a class. Katō remarks that it is crowded since midterms are close, and she suggests they sit separately until a table with enough places for the four of them opens.

Yuri sits behind Tomoko and dons earbuds. Tomoko wonders if she is listening to music when she does not listen to music, and she imagines Yuri explaining that she is listening to Buddhist sutras or even "the sounds of a sandstorm." Tomoko picks up her pair of headphones and figures she might as well also listen to music. From the carrel next to her, Katō notices that she has the same brand of "beats" headphones, and she asks if she can switch her earbuds with her for a bit. Tomoko places them in her ears and inwardly makes the salacious joke that she and Katō have, "both stuck the same thing into our holes!"

Tomoko stammers that she does not think that way anymore, and Katō smiles and thanks her. Inwardly, Tomoko muses that Katō was ranked the student "most likely to be milking sugar daddies," while thinking that Katō would more likely be a "Sugar Momma." Katō continues that she has also developed a different opinion of Tomoko as well: Tomoko is not the "quiet, dilligent girl," she thought she was. They are interrupted by a loud and annoyed sound. Katō whispers that they should start studying hard for awhile. Uchi, sitting next to Kayo, her currently unnamed Black-Haired friend, some distance behind them, angrily grits her teeth.

After some time, Yuri taps Tomoko on the back and suggests that they take a break. Katō, Mako, Yuri, and Tomoko walk to the vending machines. Mako notices that it is still raining through the windows, checks her phone, and remarks that the forecast claims the rain should end soon. Katō suggests that they wait another hour for it to stop then go home since they can borrow umbrellas from the staff room. Mako agrees. Katō turns to her and asks her if she has decided which schools she will apply to. Mako replies that Chiba West is her first choice. Tomoko thinks, "Ms. Crazy Lesbian (ガチレズさん・gachirezusan) National?" as in she will attend a public university. Katō then turns to Yuri. She notes that Yuri indicated during lunch that she does not want to attend a private school. Yuri looks at Tomoko for a moment, then responds that she will apply to Aoyama Gakuin University even though it is a private university.

Katō suggests that they return to study, then adds that next time they have a study session she will call "Kaho" (夏帆), which is a female given name, but Yuri wonders what "kaho" (かほ) means, and Tomoko wonders if she means "KAHO." Katō states that they were in the same class for two years, and she and Mako are interested in the same school. Mako smiles and imagines the Girl with Freckles.

Walking back along the corridor, Tomoko notices a number of guys jogging towards them. She inwardly wonders why they would still do club activities on a rainy day like this. She then notices her brother running with them. Tomoko and Tomoki's eyes meet, and the boy running next to Tomoki notices Tomoko. After they pass, Tomoki's friend remarks about the cute girl they passed; Tomoko acidly asks "where" and if he means "the midget" (チビ・chibi). Both Yuri and Tomoko look back at the boy and Tomoki. The boy replies, "no, not that one." Yuri asks Tomoko if that was her brother. She stammers that he is then asks her how she knows. Yuri responds that that she once talked to him when he visited their classroom.

The group finds and studies at a table for some time. Tomoko starts to nod off, and Katō pleasantly asks her if she is sleepy. She then points to her lap and cheerfully asks Tomoko if she wants to sleep (ねる？・neru?), and she explains that she does not have a younger sister or brother, "so I always feel like doting on people?" When she asks Tomoko if she ever feels that way, Tomoko sheepishly admits that she likes being spoiled. Katō then reminds her of the keychain Tomoko gave her which she still carries: "You gave me three, remember? I still have to pay you back for the other two."

Tomoko lays her head in Katō's lap under the table. She cannot calm down and fears drooling again on Katō's lap. She muses that Katō and she are like "mother and daughter." She wishes that May would last longer despite that fact that for the past two years she wished the days would pass by faster. While Katō quietly studies with Tomoko hidden by the table, a frustrated Uchi searches the room and wonders where Tomoko went.

Later, they walk home in the rain with Katō sharing her umbrella with Tomoko. Mako laughs that, in the end, the rain never stopped. Yuri declares it a "waste of time," to Mako's sharp objection, but Katō smiles and states that she got them all to study together, learned what schools they wish to attend, and even learned that Tomoko has a brother. To herself, Tomoko feels she has also learned a lot. She saw the study room for the first time, learned that clubs practice on rainy days, and, while she napped, "I got to peek underneath Yuri and the Lesbo's skirts!"

Behind her, Yuri suspects that Tomoko is thinking of something stupid.

"You are welcome!" - WataMote Wiki 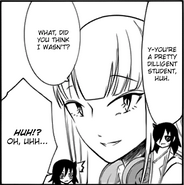 "Sleep?"
Add a photo to this gallery

Retrieved from "https://watamote.fandom.com/wiki/WataMote_Chapter_146?oldid=21151"
Community content is available under CC-BY-SA unless otherwise noted.