The chapter title page depicts the Homeroom Teacher pacing the aisle between Tomoko and Katō during an exam with Wada in front of Tomoko, Yoshida behind her, and Okada behind Katō. The caption reads, "The third-year test is important."

After the test, Yoshinori Kiyota complains to Wada that the English test was difficult, but to his surprise, Wada thinks he may have done well. Katō asks her how she did, and Tomoko replies that since she recently studied the subject, she thinks she did fine. To herself, Tomoko admits that her recent experience studying with others helped.

Outside of school, Tomoko continues to think as she stands with Yuri and Hina, who waves to a smiling Mako who is entering the line for the bus behind Kotomi. Tomoko muses that it is only the first day of exams and usually students go home to study more. Hina and Yuri simultaneously notice her silence. Hina turns to her and asks if anything is wrong. The next panel depicts the outside of the train station, and Tomoko's voice is heard stating that she wants to stop at the bookstore before returning home. Presumably Hina continues to ask if she wants company, but Tomoko insists that she is fine and they should go home without her.

Inside the store, Tomoko browses manga but feels a manga is not enough to kill time and decides on a light novel. She then enters "Wakudonarudo," a fast-food restaurant, where the Happy Server asks her if she plans to eat there. Tomoko chooses a cheeseburger, then sits next to a woman with glasses. She muses that she has spent the last few weeks with other people and now has the chance to spend some time alone. She notices the even though it is early, there are not many students from her high school which means they are all probably home studying. Since the next day will have tests on mathematics and biology which she plans to skip on her entrance exams, she concludes that the afternoon is perfect for a "loner vacation." She then considers how to spend her time: going to the arcade; seeing a movie; going to the manga cafe; or go to Book-Off, but she decides to enjoy her meal first.

As she enjoys her meal while reading her light novel, she notes that everyone raves about eating with others, but she finds it also delicious to eat alone. She hears a conversation to her left and notices the Former Classroom Representative sitting at another table talking with friends. She appears to briefly turn her eyes in Tomoko's direction as Tomoko notes that she was once in her class before. The girl then turns back to her conversation to Tomoko's consternation.

Walking home, Tomoko thinks that since everyone has been so nice to her she has forgotten how life normally is. While she feels that having people be nice to her is "better than being shit-talked," she wonders if the Former Classroom Representative immediately started denigrating her to her friends once she left. She decides that she really does not wish to see a movie and instead decides to go to the arcade to check out new games.

In the arcade, she quickly calculates that if she uses the money she intended for a movie on games, she can enjoy herself for a long time. When she decides to check out some new games, she sees Futaki dancing furiously on a dance game. She immediately nicknames her "Emoji Mark-II." She cannot believe Futaki is playing such a game during midterms all by herself but then admits that she is also alone. She moves on to notice Yoshida playing a pachinko game. While surprised to see her doing this during midterms, Tomoko concludes that it would be scarier if a "delinquent" such as Yoshida studied. She continues to see Rena playing a game as Anna watches, inwardly referring to them as "Delinquent B" and "C." She happily finds a cheap 50円 (≅50¢) game with the title "Condom (コンドム) versus" with the opponent illegible.

As Tomoko plays the game, Futaki quietly walks to another game nearby. When Tomoko feels satisfied that she has finally cleared a level, she takes a break only to notice Futaki silently, but skillfully, playing a game while others watch. Tomoko is stunned that Futaki has achieved "16 wins": "I have no clue what kind of game that is, but she must be good at it!" She muses that it must have been no accident that Futaki won the cavalry game a year ago.

Tomoko buys a soft drink can and sits down at a table to notice that she is facing Yoshida, Rena, and Anna, who greets her. Anna remembers her name and wonders why she is there given that she has more tests. As Tomoko stammers a reply, she and Yoshida notice Futaki walking past them to another table to sit alone. Yoshida recalls her from the cavalry fight. Anna wonders if the "idiots" (バカ・baka) all attend 3-5, and Tomoko inwardly protests that she is not an "idiot," she is just not studying right now. Anna feels that Futaki looks "bored" and decides to invite her over. When Anna asks her name, Futaki replies, "Shiki Futaki," to which Tomoko wonders what kind of name is "Shiki."

Anna directly asks if she and Tomoko are "idiots" for playing in the arcade during midterms while claiming that she is only there because of Rena and Yoshida. Futaki calmly replies that she is ranked 99th in the class which causes Tomoko to inwardly seethe since it is higher than her ranking. Anna responds that her ranking is good for someone playing during midterms. She then asks Tomoko for her ranking, who whispers and stammers that she is "in the middle (slightly lower)." Anna notes that Tomoko is placed nearly the same as she and Yoshida are. Tomoko inwardly explodes with surprise that she and "this delinquent" have the same results. She wonders if since yakuza in manga have become more intelligent, perhaps delinquents have as well. She continues her inward protest that her scores in Japanese, English, and Japanese literature are in the top 30th, but Anna notes that since they have become third-year high school students, students only talk about entrance exams. Rena asks, "really," to which Anna retorts that Rena never comes to school. Rena replies that since she plans on attending a vocational school she does not have to worry about entrance exams, to which Anna reminds her that she has to actually graduate.

Anna asks Tomoko and Futaki what they plan to do. Futaki replies that while she plans to attend college, she wishes to become a professional gamer. When Tomoko asks her if she means "e-sports," Futaki replies that it does not matter, she can even stream, provided that she can make a living doing it. While Tomoko inwardly cannot believe Futaki confessed this plan, Rena asks her if she knows how to play majong. Futaki replies that she does. Rena then asks Tomoko if she knows how to play. When Tomoko responds that she has played it in other games, Rena eagerly announces that they finally have enough people to play the majong games in the arcade and asks what they should bet. In the next panel, Anna holds an ice cream cone. She smiles and genially apologizes for winning to Futaki. The panel marks her "first place (1位)," Yoshida second, Tomoko third, Rena fourth, and Futaki fifth. Futaki sheepishly apologizes to Rena that she is not very good at games of chance. Rena smiles and responds that luck was not involved in Futaki dealing directly into Anna's "Baiman." To herself, Tomoko muses that she intended on spending the day alone only to end up with the "delinquent crew," but she still had fun. Yoshida asks her why she was not with the "others." Thinking of Yuri, Mako, and Hina, Tomoko responds that everyone was fired up to study, "you know like how Haruna-san (春奈) was saying," referring to Anna, but she decided not to. Yoshida then replies that she is free anytime, and if Tomoko ever needs someone to hang out with, she should call her.

After a panel focuses on the sky, Tomoko stands alone. She looks at a telephone pole where a group of black silhouetted birds fly with one some distance away. She thinks that though she did not exactly want to, after the previous year she had become comfortable with being a loner, but the previous few months makes her think she will lose that comfort. She guesses that she may obtain something more valuable in return.

Not Shown: a trademark violation. 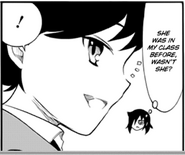 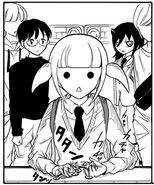 "All Glory to the Hypnotoad Futaki-Sama!"

Anna's probable surname.
Add a photo to this gallery

Retrieved from "https://watamote.fandom.com/wiki/WataMote_Chapter_147?oldid=15963"
Community content is available under CC-BY-SA unless otherwise noted.