On the 1st of June (6月1日), an excited Hina announces to Tomoko and Yuri as they stand in the school hallway that she now realizes that Tomoko's skirt is too long. Over Tomoko's protests, Hina explains that skirts should be short at least during the summer. Tomoko responds that she cannot make her skirt shorter, and over Hina's disbelief, she argues that no one cares or will notice if her skirt is short. Hina asks if Tomoko is self-conscious, and Tomoko inwardly swears. Hina continues that Tomoko's longer skirt makes her stand out more, and she can at least shorten it to her knees. Tomoko retorts that at least her skirt does not reveal her "lascivious pink" as "Nemo's" does. As Yuri quietly giggles, a sweating Hina angrily insists that everyone, including Yuri, wears short skirts.

Yuri replies that, "unlike Nemoto-san," she wears something extra underneath her skirt: "under pants (アンダーパンツ・andā pantsu)," to Hina's surprise. While inwardly considering Tomoko's term "lascivious pink," Yuri explains that Mako also wears them, and she believed that pretty much every girl wears them.  For her part, Tomoko thinks that she did not see these "under pants" Yuri describes when she was under the desk and peeked up her skirt.

Exasperated, Hina insists that they are not talking about her skirt and, since it is hot, Tomoko should have a shorter skirt. Tomoko inwardly notes that Hina always changes the subject when she does not want to deal with it. She relents and starts to roll up her waist band to raise her hem above her knees and asks how she looks. Hina admits that she does not look too bad but her skirt remains too long and Tomoko has to roll up her waist band at least three times. Tomoko claims that she had done that before, but it causes her skirt to wrinkle and appear "strange."

As Katō and Okada approach them from down the hallways, Hina insists that she will teach Tomoko how to roll it up cleanly while Tomoko tries to refuse. Katō asks them what they are doing as Hina is rolling Tomoko's waist band under her shirt. Both look at Katō and Okada embarrassed. Tomoko claims that Hina declared they would shorten her skirt to reveal her panties. Okada immediately accuses her of lying and protests that Hina "never would," only to pause and inwardly recall that around Tomoko Hina becomes strange. She quickly recalls "the time of the university," then wonders if this is another side of Hina she does not know. She stammers, "Hi-Hina," to which Hina angrily issues a denial. Katō calmly asks Tomoko if she wants her skirt shorter since she thinks short skirts look good.

Tomoko starts to stammer about the amount her skirt has been reduced, but Katō pleasantly interrupts that she would like to see her skirt shorter. She then begins to roll up Tomoko's waist band further as Tomoko blushes and sweats.

The following day, Tomoko makes her way to school wearing a short skirt. She inwardly admits that she feels both amazingly uncomfortable and anxious as she muses that for five years, from her junior high school days to yesterday, "it has been long skirts." She finds herself walking behind a girl wearing a short plaid skirt ascending the stairs to the train station. Blushing, she begins to walk up the stairs and reflexively clasps her hands behind her. Stunned, she realizes that she reflexively hid the back of her skirt with her hands as she started to ascend the stairs. She sees the girl in front of her similarly place her hand behind her to hold her skirt down and obscure any "view." Tomoko muses that every time she has seen such a girl from behind do that she felt that the girl expected her to peek. She now realizes that she also does not want to expose her panties to others who might think they are "gross or dirty or something!" She recalls sitting as a child wearing shorts with her knees together looking up the shorts of boys and recalls how they became embarrassed if their fly was open or if they "poked out the side" of their boxer shorts. She suspects it is the same thing.

She sits on the train embarrassed and holding her hands clasped over her skirt between her knees to prevent anyone peaking. She swears to herself and thinks that just by shortening her skirt she has had to start "acting like a female (メス・mesu)." Standing, Miyazaki looks and sweats when she notices that Tomoko is on the same train with her. Tomoko continues wondering how all of the other girls on the train can remain calm and wonders if they would feel her pressure if they wore nothing under their skirts.

Arriving at school, Hina sees Tomoko from behind and notes to herself that she is wearing a short skirt. She smiles as she thinks that Tomoko is always committing "sexual harassment," "but today!" She rushes up to her and loudly greets her which causes Tomoko to scream and reach down to prevent her skirt from riding up. Laughing, Hina suggests that she could have at least let out a cuter scream only to notice that Tomoko is blushing and mortified. She asks Tomoko why she has such an expression, and Tomoko confesses that she feels embarrassed, she screamed, and she is upset with herself. She admits that for the first time she has become a "female" (メス・mesu) and understands what sexual harassment feels like. From now on she will restrain herself. As Okada approaches noticing them, Hina questions that she has become a "female" since she has always been a "girl (女の子・onna no ko)."

Tomoko replies that Hina still has her "lascivious pink," to Hina's surprise. Tomoko continues that, after all, it was Hina who forcibly shortened her skirt and exposed her panties as Hina blushes and smiles sternly and Okada looks surprised behind them. 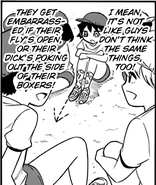 Tomoko's previous skirt she has worn for most of the series . . . 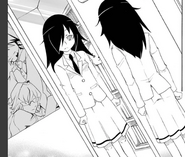 . . . comes down to her knees.
Add a photo to this gallery

Retrieved from "https://watamote.fandom.com/wiki/WataMote_Chapter_148?oldid=18571"
Community content is available under CC-BY-SA unless otherwise noted.