The cover depicts a girl's softball game from behind the team up to bat. From left to right, an unnamed Girl with Short Hair stands, Itō stands with a bat, Minami and Mako sit talking, Yoshida and Okada stand, and Kotomi holds a bat "on deck." The narration above their heads reads: "Youth! Chasing the white ball." The narration below Okada celebrates the release of Volume 14.

The chapter opens directly after the previous. Inside the gymnasium, Yuri approaches Tomoko and Shizuku and remarks that since they have some free time they should go to where Mako and Yoshida are. Tomoko agrees then asks Shizuku if she is fine with coming along. Shizuku replies that she has a class to go to.

At the baseball field, Tomoko and Yuri encounter Okada and Yoshida. Yoshida greets them by asking if they are already finished with their matches. When asked how the game is going, Yoshida complains that it is taking too long. The scoreboard shows that they are at the top of the fifth inning with Class 3-5 leading Class 2-1 12 to 9. Hina appears between Yoshida and Okada and remarks to Okada that there are a lot of runs. Okada replies that both teams are weak on defense. As Kotomi waits for the pitch, Okada notes that some players are very serious. Kotomi bunts to easily reach first base, and Okada observes that she has reached base that way five times already. To herself, Itō notes that even for a casual softball game, Kotomi bunts and even worked a walk. Unlike the boys' baseball, girls' softball is suppose to be fun and the participants should be able to realize that. "As expected," Itō muses, Kotomi fails to read the mood and makes enemies of both teams.

Mako hands Yoshida a bat and tells her that she is up next. She then walks over to Yuri and Tomoko and asks Yuri how the table tennis went. Yuri responds that their team won the first round while Tomoko thinks muses that Yuri was the only one on the team who lost. When Yuri suggests that Mako should have signed up for table tennis, she is interrupted by Minami demanding to know when the game will end. Mako explains has already been five innings so the game will end after this inning, but Minami has no idea what an "inning" is. Minami recalls being instructed by "some bitch," with glasses. In her recollection, Kotomi instructs her to strike out the batter based on her signs, but the batter easily hits Minami's first pitch. Kotomi scolds her that if she cannot follow her signs, she needs to get off the mound and banishes her to the outfield.

Minami eagerly suggests to Mako that they go root for the boys. Mako suggests they stay a bit longer while Tomoko concludes that "Kotomi-something" is "hard-core." Okada turns to see Katō and Hina and asks them to go cheer the boys since they are "a bunch of wimps" and unless they raise their morale, they will probably lose their first match. Giggling, Katō agrees.

At the socker field, Hina shouts out encouragement to Yoshinori Kiyota. She turns to see Tomoko and Yuri sitting alone. She asks Tomoko if she will not support the boys. Tomoko retorts that if the "ugly" (ブズ ・busu) cheer, it will ruin their morale. Hina insists that Tomoko is too self-conscious and she is sure there is at least one guy who wants to be cheered by her. Tomoko retorts that such a guy must have a weird fetish. She then asks Yuri why she is the same as Tomoko. Yuri replies that she is fine with either cheering or not cheering.

Katō stis next to Tomoko and says to Hina that the boys should do fine even without their support. Hina agrees given  that they are playing against the first-year students. Katō calmly turns to Tomoko and asks her what she did when she was a first-year student. Tomoko replies that she thinks she picked soccer, and since they lost in the first round and would be free for two days, she went home to get her phone to read a light novel. She then looked at bugs (虫) "Bugs?" asks Katō. Tomoko inwardly notes that Katō never seems to miss her weird things.

She looks down at a pit created by an antlion as she says, "for example," then digs it up in her hand. She explains that if one sifts the sand, one discovers the tiny antlion. A shocked Hina asks if it is alright to touch it; Tomoko responds that she thinks it is fine. To Tomoko's surprise, Katō asks if she can hold it for a bit. She remarks that it is very "hairy." Smiling, Katō exclaims that while it is wrinkled, it is cute. A shocked and blushing Tomoko is stunned by Katō's adjectives. Katō hands back the antlion while Tomoko wonders if Katō is naturally erotic. She deposits the antlion on the ground where it quickly buries itself as it forms its funnel trap. Hina remarks on its effort. All of them, including Yuri, watch its progress. They are interrupted by whistles that signal the game has finished. The scoreboard reveals that their class lost 2-1. Hatsushiba walks away with Kiyota behind him happily commiserating with an unnamed friend while a smiling Wada follows.

When Hina asks Kiyota if they never win, he explains that their strength is in basketball. That and the first years have some players who are really experiences to which Wada agrees. Laughing, Hina teasingly asks if that includes the experience of third years losing to first years and if he is not ashamed. Behind her, Tomoko and Yuri look at one another wordlessly. Kiyota cheerfully replies that cheering by Katō, Tomoko, and Mako makes them happy even though they lost. Hina laughs that she also cheered while Katō giggles. To herself, Tomoko observes that she simply played with a bug, while Yuri muses that she did not root for anyone.

Okada arrives with the Girl with Short Hair and Yoshida following. Hina happily asks if the softball game is over. Okada directly asks Kiyota if his game was a "shitty mess/embarrassment (クソダサ・kuso dasa)." Kiyota laughingly protests that their opponents were just too strong.

Yuri and Yoshida sit with the chatting Mako, while a few feet away, Katō looks at her phone as Okada fixes Hina's twintails. Minami approaches with two anonymous friends. Presumably Yuri asks Mako her if she is fine to be with them, but Mako responds that Minami went off to hang with other friends. To her unnamed friends, Minami laughingly explains that she was the pitcher on the same class team as an  "eyeglasses." Okada asks Hina if table tennis is next, and Hina replies that it is later in the afternoon. Okada notes that in her first year her basketball team made it to the second round.

Hina looks at Tomoko who is quietly sitting by herself playing with ants with a stick. Hina thinks that she did not notice it when she was in the gym, but Tomoko has been doing that for a long time. She asks Tomoko if she can join her, then she fashions a ring from a clover flower. She asks if Tomoko did not do the same when she was in elementary school. Tomoko responds that she did not. When Hina asks if she never played with flowers, Tomoko responds that in middle school she either captured or killed bugs. Hina observes that girls usually do not do that, then offers to teach her how to make things with flowers. To Tomoko's surprise, Yuri approaches her with a handfull of flowers to work with.

As they work with their flowers, Hina confesses that she hopes that they will win the next table tennis match since if they lose they will be bored for the rest of the tournament. As Tomoko forms a wreath, she muses that she is a lot less bored than she was during her last tournament. When Tomoko finishes it and holds it up, Yuri admits that it is better than she thought it would be. Hina offers to take a picture of her wearing it, but Tomoko explains that it is not for her. She walks over to Katō and presents it to her. Hina smiles as Katō squeals about how great and cute it is and asks if it is for her.

Beaming with anime sparkles, Katō puts it on and asks how she looks. Tomoko stammers she looks good, and Katō takes a picture of herself. Surprised, Tomoko marvels that Katō accepts both bugs and flowers with pleasure and declares her an "Earth Mother Goddess," while "the other two" were freaked out by the bugs. She walks back toward Yuri and Hina, thinking that she has even made a habit of leaving Katō offerings. She starts to apologize for making them wait, but Hina is talking to Yuri. Hina offers to teach Yuri how to make flower wreaths, but Yuri demurs. Hina asks if she is clumsy, and adds that she is not that good at table tennis. She playfully offers to give Yuri her wreath, but Yuri again demurs.

Tomoko stops to resume poking at an anthill with a stick. 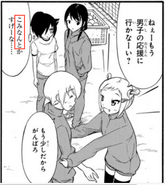 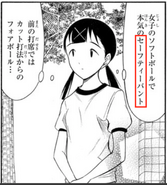 Retrieved from "https://watamote.fandom.com/wiki/WataMote_Chapter_150?oldid=18530"
Community content is available under CC-BY-SA unless otherwise noted.