Emiri Uchi's friends, the Girl with Long Braid, Kayo (Girl with Black Hair), the Nagi (Girl with Glasses), Miyazaki, and Natsu, sit on the floor of the hallway having lunch and take a "selfie." The narration over them reads, "Together forever."

In the gymnasium, Hina stands with Katō and talks to Tomoko and Yuri. She remarks that unlike yesterday the next match will be difficult and early. She then asks them if they want to watch softball. Tomoko replies that first she needs to use the toilet.

As Tomoko walks down the hallway, she sees Uchi approaching. Uchi stares ahead; she does not greet nor even look at her. Instead as she passes, Uchi remarks, "I'm waiting for the fourth match." Tomoko stops, watches Uchi continue walking away, and thinks, "Emoji. . . ."

Uchi stands dejected at a table tennis table opposite a smiling unnamed girl. The unnamed judge announces that Uchi's opponent from class 3-1 has won the final "captain's match" and will advance to the quarter finals with a score of 3 matches to 2.

Standing in front of Uchi, with Uchi's back towards the reader, the Girl with Glasses remarks that it was "interesting," while the Girl with Long Braid responds that they did better than she expected. Miyazaki waves at Uchi and congratulates her effort as Kayo holds up a phone to take a picture of Uchi.

A tearful Uchi screams, "Why?!" She starts to protest that if they won one more game, then she repeats "No!" over and over. The Girl with Glasses blushingly apologizes that she never played a lot of table tennis before, while the Girl with Long Braid quips that she is better at tennis. Miyazaki insists that no one should worry since they all did their best, to which the Kayo agrees, but Uchi screams, "No! No! I want to be in the next match!" Kayo reminds that Uchi also lost, but Uchi continues her tantrum: "My opponent was in the Table Tennis Club! It couldn't be helped!" She insists that if they had tried their best, she would have a match with Class 3-5. Kayo retorts that it was Uchi who wanted them to play table tennis when Natsu suggested softball and is playing it by herself. She then asks the stunned and sweating Uchi why she has been recently going over to the other class (3-5) during breaks: "Aren't you being cruel?!"

From a distance, Tomoko observes the conversation. Kayo continues her accusations, noting that even during their field trip, Uchi kept slipping away on her own: "I guess we were so happy we got to be in the same class together, but I guess you don't feel the same way, Ucchii!" As Miyazaki turns Kayo away, and Uchi turns to walk away, Tomoko wonders if "Emoji and the others" had a fight.

Uchi sits outside against the building wall alone and pensive. After a moment, she removes her bracelet from her right wrist. As Tomoko observes her from behind a corner, she wonders why she followed "Emoji" since they have only had very light conversations, and she does not know if there is anything she can actually do.

Uchi spies Tomoko watching her and shouts out "Kuroki!" Tomoko wonders how she noticed her. They sit for awhile together in silence. Finally, Uchi confesses that she had a fight with her friends. As Tomoko politely makes listening noises, Uchi explains that she has frequently been visiting Tomoko's Class 3-5, and this seems to be the reason for their fight. She explains that many in Class 3-5 had been in her class for two years, "like Makocchi. . . ." Then she continues "and . . . K . . . Kuroki is there as well!"

Uchi continues that "both" groups are important friends to her, but perhaps she has only been focusing on one. When Uchi falls silent, Tomoko thinks that even though Uchi has a "simple face (シンプルな顔・simpuru na kao)", she is a very complex person. "Then again," she muses, "girl friendships are always complicated." Tomoko is surprised that Uchi includes her as a friend. She admits inwardly that until now she thought that Uchi and her friends just hung around for appearances, but she now feels that they are actually friends.

Tomoko's thoughts are broken by Miyazaki calling Uchi's name. Miyazaki stands with the rest of Uchi's friends, who all look sad, and says that Kayo wants to apologize for what happened before. Uchi stands and Kayo apologies and admits "sometimes I get frustrated and say things." Uchi replies that it is not her fault since she is the same, and Kayo suggests that Uchi has problems which she did not bother to ask about.

While this happens, Tomoko gets up to leave while musing that they all reconciled better than she thought they would, and she does not know how deep nor shallow friendship is in such a girls group. She is halted by Uchi calling her name. Uchi asks her where she is going. Tomoko tries to explain that it is time for the next match, but to her and Uchi's friends' surprise, Uchi insists, "I will also go! I will support you!" Kayo expresses shock at this. As Miyazaki asks "Ucchii?" Tomoko thinks the atmosphere has become unsettling, and while she does not know Uchi well, she guesses that Uchi cannot read the mood.

Tomoko responds that Uchi does not have to come, to Uchi's shock. Inwardly, Tomoko decides she will utilize her character growth to read the mood for Uchi. She whispers and stammers that it is fine since Uchi and she are not close friends, and Uchi does not have to come with her. She continues that she really does not like that Uchi visits her class, while inwardly confessing that she feels a bit bad about what she is saying as her left hand shakes. As she tries to put on an innocent smile, she imagines the chibi faces of Uchi saying, "What's this?!"; Miyazaki saying, "Terrible!"; and Kayo saying, "Uchi will stop going to 3-5!" Tomoko rationalizes that by her accepting their hate, the "Emojis" who created the bad mood will reconcile against her. She muses that she always wanted to practice self-sacrifice like the hero of a light novel at least once during high school.

Instead, Uchi stands stunned and speechless, starts to cry, then runs away. Herself stunned, Tomoko watches her run away as she hears one of Uchi's friends ask if something has changed about Uchi recently, and another replies that there is something different about the way she talks and acts. Miyazaki recalls the time when they changed classes. Girl with Long Braid suggests that it is farther back during the second year sports festival, then suggests that she seemed a little changed during the party at the end of their second year. The Girl with Glasses recalls the trip to the university. Miyazaki explains that whenever Uchi seems to behave strangely, "it seems to involve . . ," as they all look at Tomoko standing in front of them in blushing and sweating silence.

A panel of the sky represents a passage of time. Tomoko stands with the wall to her back, Miyazaki and Kayo face her, and the rest stand or sit a bit further away, looking at the three. Finally, Miyazaki asks Tomoko how long she has been friends with Uchi. Sweating, Tomoko responds that they really are not friends, and they have only been speaking recently. Kayo asks her how it came that they started speaking recently. Tomoko replies that during the school trip, they shared the same room. Natsu asks her what she feels when she looks at Uchi. Inwardly, Tomoko protests that she has only heard from "Emoji" recently, then feels that she cannot reply with "Simple!" She mentions the time Uchi gave her souvenirs and chocolate, and muses, "I guess she is kind to everyone." Both Miyazaki and Kayo recall the incident where they asked Uchi if she is giving chocolate to someone, and Uchi replies that there was this "gross (キモ) . . . this person" she is a little interested in.

Sitting next to the Girl with Long Braid, Natsu asks her if, when Uchi said she had a person whom she cares about, the person "is not a boy," and if she was referring to "that person." The Girl with Long Braid asks, "what about it?" then suggests that if it is true then it explains Uchi's strange behavior. The Girl with Glasses whispers to the now sitting Miyazaki and Kayo that it would explain why Uchi has not been hanging out with them much: "I mean, she was visiting the person she likes, right?" Sweating, Kayo protests, "No . . . she likes . . . Kuroki-san's a girl!" The Girl with Glasses explains to the stunned Miyazaki and Kayo that while she is sure that Uchi likes Tomoko as a friend, is not the combination of Uchi and Tomoko "interesting?"

Kayo turns directly to Tomoko and asks her if what she said to Uchi was on purpose out of consideration to them. Tomoko tries to stammer "no," while Kayo retorts that Tomoko was "obvious" and suggests that Uchi "took it hard." She then asks Tomoko that since Uchi knows a bit about her, to try to get along with her better. Miyazaki tells them to wait a moment while she texts Uchi through Line. Girl with Glasses asks Tomoko for her Line, then says, "when Ucchii gets here. . . ."

Walking with a tear still in her eye, Uchi receives a text telling her to return. She sheepishly looks around the corner as Tomoko did before. To her shock she sees Tomoko standing with her friends and asks why she is there. Stammering, Tomoko apologizes to "Ucchii" for what happened previously.

Completely stunned with her face deep red and sweating, Uchi wonders why "so sudden?!" For her part, Tomoko inwardly notes that "Glasses" claimed to her that Uchi would like it if she called her by her nickname and wonders if she was wrong, since Uchi appears to be freaking out. Delighted, the Girl with Glasses exclaims to Uchi that when she was not around they talked about various things with Tomoko. Stunned, Uchi repeats "various?!" Kayo confesses they thought Uchi recently felt upset and chose to spend time and have fun with people from Class 3-5 rather than them. As Uchi begins to protest, a smiling Natsu remarks "but that was wrong, right?!" Miyazaki adds, "Ucchii just wanted to make close friends with Kuroki-san, right?"

Uchi stares stunned for a moment with her mouth open and her eyes wide. She even has a nose. She then smiles, blushes, and declares, "No, I thought this was a disgusting (キモ・kimo) person!! Hey, everyone! What a misunderstanding!! Isn't she really disgusting? Disgusting! Disgusting!" Uchi appears, in Tomoko's mind, to be happily surrounded by anime swirls with the words "disgusting" surrounding her.

"DISGUSTING (キモい・kimoi)?!!" Tomoko inwardly rages. Thinking that this is the "number one" thing not to say to a person with a negative personality, she explodes with a tear in her eye, "Shut up! I should've been more careful with this Emoji!"

Tomoko runs away, and a surprised Uchi calls "Kuroki!" after her then wonders, "Emoji?" She then stands stunned and sweating again.

She turns to her sweating friends crying and asks "why?!" 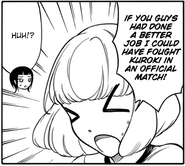 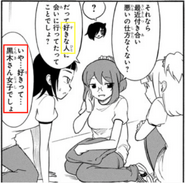 Awwwww:
Uchi walks with a tear after Tomoko dismisses her until she is called back. She approaches warily. . . . 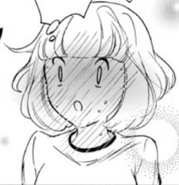