This chapter immediately follows the previous. With a view of the sky, the public address reminds that the second round of the ball tournament will end in the morning. The semi-finals of each will be played after the lunch break, and the announcer asks that the students return in time.

Tomoko Kuroki sits outside having lunch with a circle of friends and aquaintances consisting of, moving clockwise: Yuri Tamura, Mako Tanaka, Masaki Yoshida, Hikari Itō, Kotomi Komiyama, Akane Okada, Hina Nemoto, and Asuka Katō. Hina remarks that it is fantastic that their class is going to the semi-finals in both table tennis and softball. Okada replies that even though they put together teams, if they win two more matches, their class will win the championship in two sports. As Tomoko listens while chewing, Mako tells Yuri that when the she was a first year they lost in the first round, so she is happy they are advancing. Yuri responds that she did not care. As she chews, Tomoko notes that she does not care if she wins, though it is good to have something to do to pass the time.

Kotomi turns to Akane and asks her if it is okay if she can bother her while she is eating lunch. Kotomi then turns to Itō and asks her to show the video she took. She explains to all the rest that she wants the softball players to see it.

Itō's phone shows the unnamed Fūka Sasaki pitching. The scene shifts to earlier where Kotomi observes and Itō films the girl. Kotomi explains to Itō that this pitcher of their next opponent is very skilled, can windmill pitch, and, honestly, their line-up will find her hard to hit. However, Kotomi continues, since everything she throws is in the middle of the strike zone, it is about timing: "If it's Yoshida, Okada at the top of the batting order. . . ."

To herself, Itō muses that even though "Koto" is not in any athletic clubs, she scouts opponents like in a manga. Since Kotomi seems happy, however, she will play along with her. As Kotomi mentions that the other team's catcher is also good, Akari Iguchi approaches them from behind and greets her as "Senpai," then excitedly announces that Tomoki Kuroki's match is about to start.

The three sit to watch. Kotomi notes that he has been placed on defense, to which Akari speculates that since it is a school sports tournament, they may want him to support the team from the rear. Animesque light, flowers, and sparkles surround Kotomi as she muses that, "Tomoki-kun's cool even when he's not playing forward!" Itō observes that Kotomi has moved from a sports to a shōjo manga. Still bathed in anime light, Kotomi scolds herself for following Tomoki rather than the ball. To herself, Itō thinks that "for a raging pervert," Kotomi has "some pure, wholesome thoughts." She wonders if Kotomi "was like this" when she first met her: "I got the impression that she was more. . . ."

The scene shifts to two years previously. Itō stands on the field as the announcer declares that Class 2-2 wins, and three anonymous players pleasantly console themselves over the loss. She watches Kotomi pass. She follows Kotomi who sits in the garden and starts to read a book. Itō asks her if she may sit next to her. Kotomi continues reading but asks Itō her name. After she introduces herself, Itō confirms Kotomi's name then notes that Kotomi always seems to go off on her own during lunch breaks. Still reading, Kotomi confesses that she is either in the garden or in the library: "Most of my days are reading in the afternoon, baseball in the evenings." Itō asks her if she is part of the baseball club, and Kotomi responds that she merely watches. Itō asks if she means she watches professional games, but Kotomi does not respond. She continues reading as she is bathed in the same anime light as previously. Finally, she apologizes that she was reading a "really interesting part."

"To answer your question," Kotomi continues to admit that she does watch professional baseball. She asks Itō if she knows the Lottes. Itō responds that she does but then admits she is not a fan. Kotomi then offers to show her some of their games. When Itō further admits that she is not really into baseball, Kotomi insists that if she knows the Lottes, it means she likes baseball, then promises if she sees one game Itō will become a fan.

Returning to the present, Itō listens as Kotomi explains that Yoshida and Okada will bat second and third in the next game and muses to herself that Kotomi has not changed from how she remembers her. Kotomi continues lecturing a concerned Okada, with a surprised Hina observing, as Itō notes that once she starts, Kotomi becomes so monomaniacal she cannot see anything else: "just like when I first met her."

Kotomi instructs Itō to show them another angle of the video only for her to accidentally pull up a video of Tomoki. Tomoko angrily demands to know why Itō has video of her brother, and Itō responds that Kotomi asked her to film him. Tomoko explodes and demands that Kotomi stop asking others to film her brother: "you pervert (変態が・hentai ga)!" Kotomi merely insists that she asked Itō to film him so she could analyze his style of play later.

As the two argue, Itō notes that one thing that has changed is that she and Kotomi have more people to talk to. Okada whispers to her that she has it "rough." Itō responds that when Kotomi "gets like this, it's because she's having fun," and she enjoys watching her having fun. 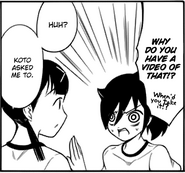 Big Sister Tomoko
Add a photo to this gallery

Retrieved from "https://watamote.fandom.com/wiki/WataMote_Chapter_153?oldid=19066"
Community content is available under CC-BY-SA unless otherwise noted.