The cover depicts the Long Black-Haired Girl, Sayaka, Akari Iguchi, and an unidentified Short-Haired Blond Girl washing and fixing their hair and makeup. The side narration reads: "for young girls, appearance is important."

This chapter continues from the previous but after Tomoko's match which is not shown. The bracket for table tennis shows that the winner of the matches between Classes 3-5 and 3-7 and between 2-6 and 3-9 will play for the championship. The side narration reads: "The ball tournament has finally reached its climax!"

Katō misses a return in her match. She apologizes to Futaki given that everyone had been doing their best. Futaki reasures her that it could not be helped since her opponent was so strong. Hina adds she is glad they advanced so far while Tomoko and Yuri watch. Yuri remarks that it is unfortunate that it is because Tomoko and Hina lost while Hina sweats. Tomoko inwardly fumes that suddenly "this one" cares about winning when she had an easy opponent. She then sheepishly notes that there is still the third place. Smiling, Katō thanks her and promises to do her best in the next match.

Meanwhile, Class 3-5 leads 3-6 at the bottom of the sixth inning by 4 to 3. To catcher Kotomi's shock, Fūka (Depressed Black-Haired Girl) hits a ball far and over the head of the equally shocked Minami, bringing the score to 4-5. Dejected, Kotomi laments to Itō that it was her responsibility to choose the match-ups, and she should have walked the girl. Walking in front of her and Itō, Okada remarks to Yoshida that it is okay since the other team only won by one run. Yoshida replies that that is how it goes. Mako smiles as she listens to them as she walks in front of them with a dejected Minami. In front of them all, Mike receives a consolation head pat from Kakkun as she explains that they lost.

Three figures stand on a podium with one of them having the same hairstyle as the Former Class Representative. The male at the podium announces the awards ceremony and asks each class to send up a representative when called. As Katō smiles as Tomoko stands behind her and the announcer congratulates Class 3-5 for winning third place in men's basketball, women's table tennis, and women's softball for third place overall. Yoshinori accepts the certificate while Suzuki exclaims that the guy who lost in the first round should not be the class representative, to the laughter of others. Standing behind Girl with Short Hair and next to Okada, Suzuki continues playfully to heckle Yoshinori to withdraw while the smiling Okada quips, "what an idiot!"

Standing behind them, Katō turns to Tomoko and states that she is glad that they won third place.

Sweating, Tomoko agrees. As other winners are announced, Tomoko admits that she originally did not care about winning or losing until about midway in the tournament. Now that it is over, she wishes they won. She has a flashback to her match where Shizuku and Uchi cheer her on. Tomoko noticed this at the time, and she muses that some people cheered for her.

As the announcer reveals that Class 3-6 won first place in men's basketball and women's softball for first place overall, girls congratulate one another behind Tomoko. One girl turns to the "Depressed Black-Haired Girl" and invites her to be the representative and reveals her name: Fūka (風夏). Fūka pleasantly demurs and a short-blond-haired girl next to her, the unnamed Miho Narita, eagerly volunteers. As this girl cheers and holds the award above her head on the podium, Katō turns to Fūka and congratulates her. As Kotomi and Tomoko stand behind them, Fūka thanks Katō but notes that she did not see her during the match. Katō responds that she did table tennis instead. Fūka quips that table tennis does not really suit her, to which Katō pleasantly protests that that is not true.

A view of the clouds marks the passage of time. Changed back into their school clothes, Hina greats Tomoko and Katō in class and invites them to do something after class. She notes that there does not seem to be a class wrap-up party planned since there is class the next day, and she suggests that the "table tennis members" should have their own party. She claims that Futaki agrees and Yuri agreed to come if Tomoko comes as well. In a restaurant Hina sits in a booth next to Futaki across from Yuri and Tomoko respectively. Katō stands at the end of the table. Hina invites everyone to cheer with their drinks while Tomoko inwardly regrets that she already drank hers. As their glasses clink, Katō thanks everyone for their good work (おつかれさま・otsukaresama) while Tomoko stammers the phrase. Katō asks what people want to eat. Hina eagerly proclaims that she is really hungry from moving around so much, then asks Futaki what she wants.

Futaki responds, "focaccia." When the food arrives, and Futaki takes a bite, her usual "emoji" ▵ mouth becomes a ω. Tomoko inwardly remarks that she is making a face likes she wants to go "wow" (ウオウー) "or raise a shrimp or something." Futaki maintains this expression as Yuri reaches over and uses a pizza cutter to slash Tomoko's focaccia into ribbons. When Yuri invites her to help herself, Tomoko wonders if Yuri has some grudge against pizza.

Hina interrupts them to ask if they all enjoyed table tennis while declaring that she found it fun. Katō admits that though she really does not like sports very much, she did find it fun. Hina protests that Katō has such good reflexes, and Katō responds while she is not bad at it, she does not like doing it that much. Tomoko inwardly muses that table tennis is something that "plain people (地味な奴・jiminayatsu) do afterall." While Hina continues talking, and Futaki eagerly consumes her focaccia with her new ω expression, Tomoko rationalizes that Hina and Katō probably only played table tennis to accompany her. She also suspects that Yuri did as well, "but she'd never admit it." She stares into her glass and muses that "Mark-II" (Futaki) also tried very hard. She wonders if she should have tried harder for their sake and, if she had practiced a little harder, they may have won the championship. Still she admits, she had fun.

Futaki remarks that she chose table tennis since she is not very good at team sports, but since this was her first time working together with everyone she had fun. She adds that while third place was fine, since this was the first and last time they will play a table tennis tournament together, she wished they won. Katō agrees. Inwardly, Tomoko fumes at "this bitch" Yuri, who is looking at a "spot the difference" game on the children's menu in the midst of such a serious mood. She sharply mutters to Yuri she is doing something only "brats and lazy assholes do!"  Yuri looks up and responds that she does them often when she is with Mako.

To herself, Tomoko grouses that while Yuri may not want to be with any of them, she should read the mood and act like "Little Weirdo (不思議ちゃん・fushigichan)" (Futaki). As animesque swirls surround Futaki who has resumed her ▵ mouth, Tomoko inwardly scolds Yuri that while Futaki seems weird she is saying some serious things, and she should pay attention to how Futaki can hold back her weirdness and act according to the "mood."

Yuri moves her menu in

front of Futaki and confesses that she found ten of the things in the picture but could not find the rest and asks for her help. Futaki quickly points out a number, though Yuri claims she found one of them already. Watching, Hina admits that the game is tough. Yuri surprises both Tomoko and Futaki by stating that while it is the last time they will do the ball tournament together, chances are that their class will continue doing things together in the future, but "I don't care (私はどうでもいいけど)." The rest look at Yuri who is looking down. With a view of the sky, Tomoko rages that "this bitch," who only won one table tennis game, got the last word. 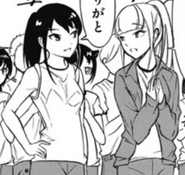 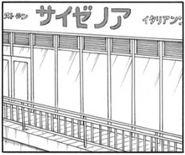 Alice's Tomoko's Restaurant:
the word to the left of the title is "sutoran of resutoran or "restaurant," and the one to the right is "Italian"

Retrieved from "https://watamote.fandom.com/wiki/WataMote_Chapter_154?oldid=19764"
Community content is available under CC-BY-SA unless otherwise noted.