The cover depicts the classroom with Tomoko entering class and looking at Yuri who looks back at her. Yoshinori Kiyota is at the doorway behind her with Uchi peeking in behind him. Asuka Katō sits at her desk turned to listen to Akane Okada chat to her and Kaho who stands next to Katō's desk. Meanwhile at the black board, Kakkun has Mike pinned against it while the Girl with Short Hair takes their picture.

Ogino hands Tomoko her midterm grades then calls up a Kotomi Komiyama. The side narration asks, "How did they tests go. . . ." Tomoko inspects her grades and takes her seat deeming them "So-so (まあまあ・māmā)." A smiling Katō returns to her seat next to Tomoko with her grades. Katō asks her how she did, and Tomoko responds that she did "so-so" then asks her how she did. Katō responds that she also did "so-so" then, to Tomoko's surprise, hands her her results and invites her to look. Tomoko thanks her and offers her own. Tomoko thinks, "what about Katō-san's grades," noting that she suspected that Katō excels at everything. As Katō sits calmly waiting bathed in anime sparkles and flowers, Tomoko continues to muse that it will not be bad if Katō is off by 2 standard deviations, but since Katō did gain acceptance to their high school, she doubts it.

Surprised, Tomoko muses that with her results, even without studying, Katō could enter a number of professions. She imagines Katō as a "Cabaret Girl (キャバ嬢・kyabajō)," a "beautifully framed city councilwoman (美人枠の市議会議員・bijinwaku no shigikaigiin)," and a "CyberAgent employee (サイバー●ージェントみたいな所の社員・saibā●gent mitaina tokoro no shain)," with the "A" censored in the original. Tomoko first feels delighted that her score in Modern Literature is better than Katō's only to see that she achieved a perfect 100 in English. Tomoko only scored a 65.

Sitting, sweating, and sulking as Katō views her scores, Tomoko grouses that Katō's results are expected for high school girl who uses the English-based names rather than the Japanese for "penis" and "vagina." Katō politely notes that Tomoko did not do well in English; Tomoko sheepishly replies that it is not her specialty. Katō continues that since English scores have a strong bearing on whether or not she will be accepted by AoGaku, she had better study it. She then declares that they will study after school to Tomoko's surprise but acceptance.

Hina is surprised when Tomoko wishes to see her results. While Yuri observes them from the desk next to her, Hina protests that she does not want to show Tomoko since they are not that good. Tomoko smiles and muses that since Hina does not want to reveal her results, her brain must "also be pink." Hina continues to protest that she feels Tomoko is making fun of her, but she relents. To Tomoko's inner shock, she finds that Hina did slightly better than her overall. Hina remarks that Tomoko is not very good at subjects besides Japanese.

"Tomoko!" Yuri calls to her holding and lightly waving her results, "show me!" To her similar sweating and silent shock, Tomoko realizes that Yuri did about the same as her but scored higher in ethics despite the fact that Yuri has "0 sense" regarding ethics! With a pleasant look, Yuri remarks that it appears they will not be accepted with these results. Inwardly, Tomoko rages on why she looks so happy about that." Yuri offers to help Tomoko study, but Tomoko responds that she thinks Yuri "sucks (下手・heta)" at teaching. Yuri protests that she does not "suck!"

Later, Katō brings Kaho with her to meet Tomoko. They along with Yuri and Hina study together.

At home that night, Tomoko tries to review Katō's English vocabulary cards, particularly "motherhood" and "suicide." She recalls Katō lending the set to her after their study session with the promise that if she memorizes them and the grammar she should be able to raise her grades. When Tomoko asks her if she is sure about letting her borrow them, Katō admits that she has already memorized them though still reviews them periodically. Katō advises her to pronounced the words out loud as she tries to memorize them, since it will be easier for her "eyes, ears, and mouth" to remember them. Tomoko imagines Katō saying "Penis," "Johnson," "Dick," and "Vagina" out loud as she reviews her cards.

Katō promises to lend her another set when she is finished memorizing the first. She declares that once Tomoko memorizes about 3,000 words she should get a good understanding to Tomoko's further shock. Katō smiles as she places her left hand to her cheek as anime lights dance about her and proclaims, "Let's got to AoGaku together!" With her eyes swimming, Tomoko stammers "Y-yes."

Returning to the present nighttime, a fidgetting Tomoko thinks that her high school entrance exams were so much easier since "they matched up with my level back then."

In class the following day, Katō asks her to study after school together again. Tomoko agrees, and later she walks with Katō and Kaho. She looks out the hallway window to see Yoshida outside walking with Anna Haruna and Reina. She muses that it must be nice to play around rather than attend college.

She sits studying with Katō and Kaho until Fūka Sasaki approaches with her friend with short, blond hair. Fūka greets "Asuka" and asks if she and her friend may join them since there are no open areas. As Tomoko watches and sweats, Katō agrees. After they sit, with Fūka sitting across from Katō, Fūka asks her if she is applying to Aogaku since she will be. A sweating Tomoko tries to concentrate as the girls talk around her. Fūka's friend asks Kaho what her college choice is, and Kaho replies that she is going for Chiba West. The friend jokingly asks if her brain is that good, which a laughing Kaho asks if her brain is "not bad?" Tomoko nervously notes that since Yuri, Nemo, and "Crazy Lesbo (ガチレさん・Gachire-san)" are absent, she is "completely on the away team."

Fūka notes that Tomoko is in Katō's class and pleasantly asks for her name. Tomoko stammers "K-Kuroki." Fūka happily reveals her last name as "Sasaki" (佐々木) and greets her formally. Tomoko returns the greeting, and Fūka's friend introduces herself as "Miho Narita."

Katō asks Tomoko if she used her flash cards. Tomoko replies that she did, and Katō encourages her by promising to lend her her next set once she memorizes the first, and she should do so in time if she memorizes twenty words a day.

After some time, Tomoko inwardly feels exhausted. She notices that it was easier to study with Yū and "Kotomisomething," particularly when it came to moments of sexually harassing Yū as she imagines her head resting against Yū's breasts as she tries to write on a board.

"Kuroki-san?" Katō asks as Tomoko realizes that she thought out loud.

Stunned, Tomoko tries to explain that she has a friend she use to study with who would let her touch her breasts during breaks. She became tired studying, "so I just remembered it!"

Smiling and unphased, Katō asks if this was the "sexual harrassment" of friends she had mentioned before. When Tomoko responds that it is, Kato smiles and responds, "So during break, do you want to touch them?"

An intrigued Miho, a stunned Fūka, and a surprised Kaho stare at her. Inwardly, Fūka screams, "Kuroki-san is strange, but Asuka?!" Stammering, Tomoko demurs, and Katō laughs, which calms Fūka into thinking Katō's offer was some sort of "joke," but she recalls that Katō never makes such jokes. Nevertheless, Katō stands and invites Tomoko: "let's go out for a bit!" Inwardly, Fūka screams "Asuka?!!"

In the hallway, a sweaty Tomoko holds her skirt and stands in front of a still smiling Katō. Katō tells Tomoko that she can do to her what she always does to her friends. She explains after Tomoko's shocked "Eh!?" that she never had the opportunity to play like girls, and she wants to give it a try. Tomoko thinks that her sexual harrassment is nothing like that and inwardly protests that it is like what is seen in "City Hunter (シティ●ンター・shitī ●ntā)" with just carefree harrassment without consequences.

"Besides," Katō continues as she places her left hand on her own left breast as anime sparkles surround her, "Kuroki-san seems tired from your studies, right?" and offers to help her in any way she can. Screaming to herself, Tomoko protests, "no, that breast is pretty heavy!" She inwardly concludes that she cannot just grope Katō and stop: "This is one of those things where I have to take responsibility, right?!"

Tomoko later walks outside alone and recalls the smiling Katō remarking as she leaves with Kaho: "You're heading the other way? Very well, see you tomorrow Kuroki-san!" Tomoko thinks that if Katō is going to make a "sad face" perhaps she should have followed her.

She sees Anna, Rena, and Yoshida sitting outside the SEGA arcade. She inwardly thinks that it must be "nice" to play at an arcade. Anna recognizes and greets her, and then asks her what she has been doing at this late time. Tomoko responds that she has been studying at school to Anna's surprise. Rena remarks that they should go home as well, and Anna agrees. Calling her "Reina," Yoshida tells her to lend her her bike and confirms that she has two helmets. When Rena asks about herself, Yoshida tells her she can take the bus, and she will later treat her to a meal.

Tomoko sits on the back of Rena's scooter. Yoshida tells her to hold on, but then reminds her that if she grabs her breasts she will kill her. Tomoko stammers that she understands. As they ride, and are bathed in anime streams of light, Tomoko is stunned at how fast they are going. Tomoko calls out to Yoshida who cannot hear her. Screaming, she asks Yoshida what her future plans are. When Yoshida responds that she does not have any, Tomoko responds "I see (そっか・sokka)." Yoshida demands to know what she means, and Tomoko stammers that she is just kind of relieved. "You making fun of me?!" Yoshida demands.

When they arrive at Tomoko's home, Tomoko tells her they have arrived, then has to scream for Yoshida to stop. When Yoshida slams on the breaks, Tomoko grabs Yoshida's breasts hard, and Yoshida brings her elbow down on Tomoko's helmeted head.

Rubbing her head after taking off the helmet, Tomoko laughs and admits it hurt. Yoshida demands to know why she is laughing since it makes her feel uncomfortable. Tomoko stammers that she just felt nostalgic. She then thanks Yoshida for bringing her home then, as thanks, offers to let her "f●ck (フ●ック) my brother." Yoshida first asks if she is "stupid," then remarks, "you have a brother?" To herself, Tomoko recalls that Yoshida does not know this.

After Yoshida drives off, Tomoko looks up at the sky. She thinks that she has a lot of things that she has not decided upon yet; however, she wants to touch Yū's breasts, Yoshida's felt good, and she really wanted to touch Katō's as well. 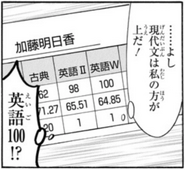 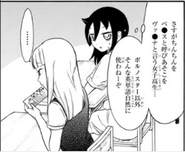 Katō's Vocabulary Cards
According to Tomoko 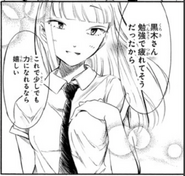 "You are Welcome Again!" - WataMote Wiki 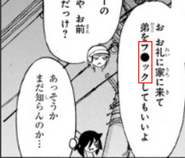 Tomoko's Censored Offer
Does Not Actually Censor Anything