This chapter is divided into sections and directly follows the previous chapter.

Tomoko enters the train for her trip to school and sees Reina. They greet one another, and Rena asks Tomoko if she takes this train. Tomoko stammers in the affirmative then asks if it is also Rena's train. Rena reminds that Yoshida borrowed her bike the day previously. Standing across from them, Fūka notices the two standing together. She inwardly wonders that Tomko is with that "kid" (子・ko) from her class, which would make a stranger combination than Tomoko and Katō. Rena continues that it has been a long time since she has ridden the train. Fūka inwardly admits that she is still worried about the previous day: "After all, did she touch Asuka's breasts?!" and she considers asking directly. Rena continues her conversation with Tomoko. She mentions that Anna claimed that Tomoko performed oral on Yoshida and asks her if that is true. Tomoko stammers her denial and explains that it was a dog. Stunned, Rena asks her how it happened. Tomoko explains that when she asked the dog to beg, the dog performed cunnilingus on Yoshida. "Seriously? He wasn't a 'butter dog' eh?!" Rena replies. To herself Fūka recoils: "What a vulgar conversation while on the train!" but she then rationalizes that it may be better for her to ask "such a person than Asuka."

The cover picture depicts a disturbed Fūka walking the hallway. At a distance, Yoshinori Kiyota talks with Wada as Tomoki walks past them. Holding a rolled-up poster, Mako walks a few paces behind him, while Akari watches Tomoki walking away from behind them. Nakamura, an unnamed friend of Tomoki, smiles and hold Sayaka's left wrist; Sayaka appears upset and is pushing him away with her right hand. In the foreground, Miyazaki turns to Minami who is approaching her.

Sitting next to her, Katō looks up from her phone and wishes Tomoko a good morning. Sweating, Tomoko returns the greeting. When she notices that Katō is smiling as she works her phone, Tomoko inwardly feels relieved that Katō does not appear bothered by what happened the day before. As she stares at Katō, Katō appears surrounded by animesque sparkles. Tomoko rationalizes that "boobs are a high hurdle," but touching her hair would not be sexual harassment. Katō notices her staring and pleasantly asks what is wrong. Tomoko stammers that though she could not touch her "boobs" the day before, she thinks she could touch her hair.

Sitting at her desk, Yuri observes Kakkun chatting with Mike. She thinks that there is only one more minute until home room, and she hopes that it will be a good day. Just out of the view of the panel, Minami sits exclaiming that she just made it. She tells Mako that she overslept, and she was lucky that the bus arrived ten minutes late. The unseen Ogino announces that homeroom is about to start as Yuri stares ahead.

Hina approaches Tomoko who is sitting at her desk with a magazine. Hina ask her what she is doing, and Tomoko replies by asking if she has scissors. She does not and calls out to Okada to ask if she has a pair while Tomoko protests. Wada turns to her and offers his. With them all watching, Tomoko sheepishly cuts out a picture from a magazine of sexily clad teenage girls.

In the foreground, two anonymously drawn girls chat. One states that "Koharu-chan" is coming to Class 3-4. The other rhetorically asks if it is her or has Minami has been coming by recently, which she finds hilarious. Behind them, a scowling Kayo stares at the sitting and dejected Emiri Uchi. Behind Kayo, Nagi (Girl with Glasses) kindly asks Uchi if she has still not apologized to Tomoko. Uchi mutters that she has not. Kayo sternly states that she thinks that anyone would be angry at being called "gross" (キモい). Looking down at her desk, Uchi sheepishly protests that being called "gross" is not an insult to her.

She is interrupted by Minami addressing the two girls as "Sachii" and "Norii." Norii remarks that Minami should just join their class already. Minami then overhears Uchi explain emphatically that, "Anyways . . ! Kuroki's gross!" and without "gross" Kuroki is not Kuroki, and if the gross was removed, there would be nothing left. Excited, Minami asks her what she is talking about: "You're talking about Kuroki being gross?! Awesome!" Minami then produces a picture on her phone of when Tomoko received make-up from Katō.

Uchi takes the phone and studies the picture closely while remarking that she knew about it, and it is beyond disgusting. She asks Minami to send it to her, and Minami eagerly asks her for her Line address. She sends it to Uchi's phone and thinks that while Uchi is only a "B Ranked" person, she is now a friend. She helpfully adds that, earlier, Tomoko hiked her skirt really short.

Uchi curtly orders her to never come to her class with "that filthy face" again.

As Tomoki stands in his class, Akari watches him. She inwardly notes that recently he always goes somewhere during breaks. She suspects that with all of the rumors going around, it must be difficult to stay in class. She laments that even though they are finally in the same class, they do not talk much. Sayaka greets her, pleasantly asks why she does not look well, and she invites her to get some fresh air. As they lean out a corridor window, Sayaka remarks that it is not like her to be depressed. Inwardly, Akari rages that it is all Sayaka's fault as she recalls Sayaka loudly scolding her in class about how she heard that Tomoki groped an upperclasswoman, and since Akari said that she get over saying that she wanted to see Tomoki's dick Unmentionables.

Akari corrects her thinking by noting that Sayaka has always tried to do her best for her. Sayaka reveals that she has become friendly with Tomoki's friend Nakamura, and she offers to ask him about Tomoko for her. Nakamura arrives and greets her. Akari listens to them seemingly argue and insult one another over him borrowing a textbook. After he leaves, a blushing Sayaka mutters that he is "truly stupid." Akari smiles. She inwardly regrets becoming irritated with Sayaka for becoming friendly with a guy while she has gone nowhere with Tomoki, especially when Sayaka always cheers her on. She vows to cheer Sayaka now.

She asks when Sayaka became close to Nakamura, but Sayaka denies that they are. When Akari insists that the two looked like they get along, Sayaka retorts that they are talking about Nakamura. Akari should remember him from middle school, Sayaka insists, and she lists his odious qualities. Akari slyly asks if it would then be alright if she fell in love with him.

Sayaka looks stunned. She finally replies that Akari is wasting her time, and he only has good looks. When she asks Akari about Tomoki, Akari giggles and thinks that she has never seen Sayaka so worked up. As Akari tries to confess that she was joking, Sayaka hysterically insists that Nakamura probably has a small Unmentionable, the type of which she suspects would not satisfy Akari!

As Akari blandly listens, Sayaka continues to rant that Tomoki probably has a "huge Unmentionable" which would make him perfect for "a lover of massive Unmentionables" like Akari! Akari starts to calmly reply while wondering if she should respond that it is fine since she is her best friend.

While in her mind she recalls Tomoko confessing to Katō that she is a "huge pervert," then Fūka talking to Tomoko and Rena on the train that moring, she thinks, unlike Uchi, she has never shown any interest in her until now. She recalls the shocked look in Uchi's eyes as she thinks, "Kuroki-san?" She then recalls passing in the train with Tomoko grabbing on to her, and she sees Uchi standing on the platform watching them stunned. She recalls hearing Uchi start to ask her if she and Tomko "are really?" Miyazaki replied, at the time, that while she is "anxious" about her, she does not want to be Tomoko's friend (友達・tomodachi).

Tomoko stands with Yoshida, Mako, and Yuri in the hallway. Yuri asks Yoshida if she really came by motorbike that day. Yoshida replies that she borrowed it from a friend. Mako asks her if she is okay since she will be punished if she is caught riding it in her uniform. Yoshida insists that it is fine if no one sees it, only to be interrupted by an overhead announcement directing her to come to the Student Counseling Room (生徒指導室・shidōshitsu) "immediately." "Seriously?" Yoshida protests while Tomoko thinks that the "flag (フラグ)" got tripped rather quickly.

Then she hears the announcement that she, too, must come to the Student Counseling Room immediately. 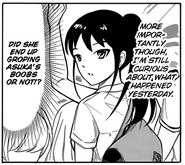 Not Shown: How to Win Friends and Influence People
Add a photo to this gallery

Retrieved from "https://watamote.fandom.com/wiki/WataMote_Chapter_156?oldid=20966"
Community content is available under CC-BY-SA unless otherwise noted.