Tomoki starts to leave home for school but Tomoko asks him to wait for her since she is leaving for school early that morning. As they walk, Tomoki muses that she always left later; Tomoko replies that she has various things to do for the last day. As Tomoko blathers about how she now understands why companies have exercise clubs since going to school this early makes her feel like a "corporate slave,"

Tomoki walks away quickly. Tomoko rushes to catch up complaining that this could be the last "chance" he has to go to school with "Onēchan." Tomoki flatly claims he does not want that "chance," and this is the pace he always walks. Tomoko suggests he consider changing from soccer to speed walking.

On the train, Tomoko presses her hands and face to the window of the door and stares at the passing scenery. Tomoki watches as well from behind her. When they arrive at school, Tomoko watches Tomoki silently walk away from her. She asks him if he is going to his club room. As he still walks away, she calls out, "do your best!" Tomoki stops for a moment then retorts, "No, you do your best . . . with your suspension. . . ."

In the Student Counseling Room, Tomoko and Yoshida complete a worksheet while sitting in front of the Male Teacher with Glasses. Tomoko announces that she is finished and Yoshida quickly adds that she is as well. As she watches him grade them, Tomoko inwardly grouses that even though it is the last day of suspension, there is still a lot of work to do. The teacher smiles and announces that they both scored "100," and congratulates them for taking their time in suspension seriously.

Tomoko stammers a "thanks," while thinking that she did not give a "shit (クソ・kuso)." Tomoko returns to working on another paper while thinking that thanks to self-studying "like a fool (アホみたい・ahomitai)" she has managed to increase her scores in her specialized areas. She further muses that she could focus better than she could in class. Looking out the window, she observes that this day makes it a week of suspension, and after this day, this lifestyle will end.

In Class 3-5, Mako eats lunch with Yuri. Mako remarks that this is the last day of Yoshida and Tomoko's suspension, to which Yuri mutters an "un." Mako asks if she wants to pick them up. Yuri calmly replies that it is "good," to which Mako asks which one, but Yuri only responds that she will go.

In the hallway, Katō walks with Hina and Akane who are drinking juice. Akane notes that suspension ends for the two, then asks Hina if she and Asuka will stay behind to meet them. Hina replies that they will, and Akane states that she will as well and suggests they will all wait in the study room.

They encounter Fūka Sasaki and Miho Narita walking towards them. Fūka greets Katō with an "a" as Akane and Hina chatter amongst themselves. Katō asks Akane to go on ahead to the study room. Akane first starts to question, then with Fūka blushing, indicates that she understands.

Standing alone with Fūka, Katō apologizes for her behavior from before. She confesses that looking back at it, she was a little mean. Fūka quickly dismisses her apology and apologizes for asking her something "weird." "Something about Kuroki-san touching my breast?" Katō helpfully adds. Sweating with her eyes closed, Fūka insists that she has already forgotten about it. Bathed in anime light, Katō smiles and reveals that Tomoko never touched her. Fūka responds positively but inwardly wonders why she feels disappointed to learn that.

Katō starts giggling and adds between giggles that later Tomoko asked to touch her hair. She keeps giggling and starts to explain that she made a mistake, but the bell rings before she can explain further. She claims that she is out of time and leaves with a "later."

"Hair?" Fūka thinks to herself after Katō walks away.

She sits in class behind the Former Class Representative writing but staring ahead.

Suddenly she thinks to herself, "E?! HAIR?!"

Tomoko and Yoshida sit in the Student Counseling Room. The teacher stares at his watch, then finally announced that they may go. Ogino walks in to announce that their mothers have arrived. As they all leave the room and walk down the hallway following the Male Teacher with Glasses, Ogino scolds Yoshida to fix her collar. They arrive in the Principal's office where Mrs. Kuroki and a woman with bleached hair and a long ponytail stare at them as they arrive. Across from them sits the Principal.

The Principal bows and thanks them for taking the time out of their busy schedules to come. Yoshida and Tomoko's mothers return the bow. Tomoko's mother apologizes for the difficulties their daughters have caused. Meanwhile, Tomoko looks around the room when she realizes that she has never been in the Principal's office before. Smiling, the Principal announces that Tomoko and Yoshida will now express their apologies.

Tomoko nervously realizes that she has never spoken to the Principal before. She wonders if she can be a little playful as she imagines declaring that she will from now on ride a motorbike to school as the smiling Principle responds that that is a bit much as he pounds his tea cup on her head. Tomoko wonders if he is the type of person who can kill while smiling.

Instead, Tomoko meekly declares that she found it tough not to attend classes for a week and will, from now on, strive to never break the rules again.

To her shock, the Principal kindly asks her why, specifically, she found it tough not to attend classes. With some stammering, Tomoko admits it was because she could not see her friends. The Principal accepts this and then moves on to Yoshida while Tomoko inwardly grouses that she received no feedback for her apology.

Outside Anna Haruna and Reina sit on a bench talking. Anna asks Reina what it was like for her. Reina says that she does not remember; the Principal called her parents, talked about a lot of things, and then it was over. Anna notices a particular happy dog walking past. She remarks that that was the dog that was there when Reina returned from her suspension. "Cunnilingus Dog (ク●ニ犬な・ku●ni kenna)!" Reina declares while Anna giggles. Nearby, Nagi (unnamed Girl with Glasses) and Kayo, walking with Miyazaki and the Girl with the Long Braid, smile and wave goodbye to a smiling Uchi. Kayo says "later," while Nagi encourages her with a "do your best (がんばってねー・gambatte nē)."

The dog approaches Uchi. Uchi declares him "gross" while wondering "what is with this dog?" She then thinks about saying "gross" when she came to apologize to Tomoko. She kneels and pets the dog repeating to herself "not gross!" then "cute!" then finally "grossly cute!"

Yuri and Mako arrive and Yuri notices Anna and Reina. She remarks that they are Yoshida's friends and Mako affirms. Yuri then notices that Uchi is there, while Mako notices that the dog is as well. Uchi, with her face being licked by the dog, cries "Uwaaaa" and "gross!" .

Katō, Akane, and Hina arrive. Hina greets "Tamura-san and Mako-chan." Hina notes that Yuri and Mako were not in the study room; Mako replies that they were in the library. Mako suggests that they wait and text Tomoko, but Katō happily responds that she already has.

While Yuri stares at them, Hina announces to Mako that "Ā-chan" can text Yoshida. Mako admits that she already has. Yuri turns to Mako and reminds her that she told her not to contact them. Mako admits this but reminds that this is the last day. Yuri does not respond.

Meanwhile on the bench, Anna notes that the girls are "Masaki and Kuroki's gals (ダチ・dachi: from tomodachi)." Reina notes that they are together a lot, and Anna admits that she has never seen so many people. Over a view of the sky, probably Anna adds, "Well, good!" Reina is surprised that she would think anything "good" could come out of a suspension. "Well, yeah. . . ."

As they walk, Tomoko notices her phone and then announces that her friends are waiting for her.

Tomoko's mother responds that she better hurry to meet them.

Tomoko starts to run off, stops, then looks back at her mother. Looking legitimately sad, she apologizes to her mother for her suspension and for making have to come into school. Her mother merely replies that it is fine and she should hurry. She adds that Tomoko should let her know sooner rather than later if she will not need dinner.

Tomoko stammers a "yes." As she leaves, her mother smiles and thinks that she was not worried about the suspension, she was more worried about "that but. . . ."

As Tomoko arrives to happily meet the waiting Katō, Akane, Hina, Yuri, Mako, Yoshida, who apparently escaped her mother, Reina, and Anna, who holds up a soft drink can, Tomoko's mother's thoughts continue: "I'm sure she'll be fine, right. . . ."

Tomoko and Yoshida's Mom
"Has it Going On!" 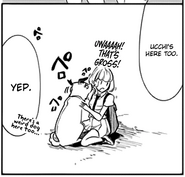