This chapter directly follows the previous. The cover page depicts Shizuku Hirasawa and her boyfriend watching Nagi (currently unnamed Girl with Glasses), a giggling Kayo, Miyazaki, and the Girl with Long Braid walking away down a sidewalk in a park. The narration reads, "Everywhere you look, youth is all around. . . ."

A sheepish Tomoko talks to Yuri as Hina, Akane, and Anna look on. Next to her, Yoshida talks with Reina. The perspective changes to reveal Katō listening next to Akane. Some distance behind them, Uchi stands watching with the dog.

Sweating, Uchi inwardly complains that she wants to apologize, but the words will not come out. Also sweating, Tomoko stammers back, "Ah . . . yeah," then continues that during her suspension, she noticed that Uchi called her, and she asks if she needed something. Looking down, Uchi responds that she wants to apologize to her. When Tomoko asks her what for, Uchi replies that it is for calling her "disgusting" during the school intramurals.

When Tomoko stammers, "A-a . . . i-it's fine," Uchi exclaims, "Eh? Then it's okay to call you 'disgusting' again?!!" to Tomoko's surprise. Visibly angry with a manga bulging blood vessel on her cheek, Tomoko replies that it is not good, but Katō approaches and interrupts, "Uchi-san."

Smiling while clutching her hair, Katō lectures that it is better to not to call a person digusting (持ち悪い・kimochiwarui) since Uchi would not want to be called that. Uchi stammers a moment, then explodes in protest that when she says "disgusting" (キモい・kimoi) she does not mean "digusting" (持ち悪い・kimochiwarui) as Katō phrases it as in "grossed out." Instead, she insists it is like using the word "crazy (ヤバい・yabai)." Just as "amazing," "cute," and "delicious," can be called "crazy (ヤバい)," her "disgusting (キモい)" is the same.

Katō pleasantly confesses that she does not know what Uchi means, but she suggests that Uchi is saying that she does not actually find Tomoko "disgusting (持ち悪い)." "No," Uchi responds more calmly, "disgusting (持ち悪い) things are disgusting." As Tomoko inwardly screams, "what?!" Uchi explodes again to declare that she does not just feel disgusted (気持ち悪い), she also feels good (気持ちよさもあるの). Maintaining her demeanor, Katō asks Uchi what she is saying while Tomoko inwardly demands the same thing. They are interrupted by Hina telling Uchi to calm down. While Katō watches smiling, she advises that they move on while suggesting that Uchi would not have waited for "Kuro" if she hated her.

To Hina's surprise and irritation, Uchi remarks that her using "Kuro" is "also disgusting (キモい)." Hina spits back, "Huh? Let's get going!" then declares that there is space for them in the Techno Garden. Akane agrees they should go. Kneeling in front of the dog, Katō beams, pets him, and says, "later, puppy!" Tomoko muses that this may be her chance to see under Katō's skirt, while Uchi says, "Goodbye, Disgusting Dog (キモイーヌ・kimoīnu)." Behind the trio of Uchi, Tomoko, and the kneeling Katō, Yuri turns away with a dark expression and an expletive as Mako watches.

The group of Akane, Katō, Tomoko, Hina, Uchi, Yuri, Mako, Yoshida, Anna, and Reina make their way. Walking next to Tomoko, Hina remarks that she feels like it has been a long time since she has talked to her. Sweating, Tomoko agrees that it seems that way. Hina continues that she seems hesitant like "the old Kuro." Tomoko explains that it has been a while since she talked to anyone other than Yoshida. Hina continues her needling by suggesting that loners like Tomoko revert. Tomoko tells her to shut up.

She then remarks that she was fine when she met Itō during her suspension.

Hina suddenly tells her to raise her left hand to make a fist. When she does, Hina "fist-bumps" her in congratulation for finishing her suspension. She then asks if that cured Tomoko's fear of strangers. "No," responds Tomoko, who then asks what sort of ritual it is. Hina explains that she was matching Tomoko's spirit, to which Tomoko reminds her that they went to different junior high schools.

In the food court, Hina tells Akane that there are open seats and instructs her to take some while she takes everyone's orders. Uchi immediately sits next to Tomoko as Tomoko sits at the table and Yuri and Mako watches them. Mako asks if she wants to sit with Tomko, but Yuri responds that she is "fine." Katō asks them what they want; Tomoko responds that she will have a cola, and Uchi says she will have the "same."

After a panel of anime lights, Akane proposes a toast to Yoshida and Tomoko for completing their suspension. Tomoko sits next to a quiet Uchi, with Katō, Akane, and Hina also at her table. As she sips her cola, she thinks that she has been having a lot of drinking gatherings with normal people. Katō offers her to try some of her meal, and Tomoko sheepishly agrees.

Yuri sits directly behind Tomoko at another table. She listens to Anna ask Yoshida how her week went. Yoshida explains that it mainly consisted of completing work sheets. Reina asks if the teachers were angry; Yoshida responds that they were not. Reina grouses a bit that that was not like it was during her time, then she notices Mako and pushes her dish to her and tells her to eat. Mako thanks her while Yuri watches in silence. As Mako eats, Reina asks her her name. While Mako responds, Yuri happily munches on the dish.

Sitting next to Yuri, Anna looks to Yoshida slyly to Yosida's surprise.

She then offers her french fries to Yuri. As Yuri enjoys the fries, she looks behind her at Tomoko. Hina says that "Ā-chan was like," as Akane drops her head into her palm and asks she not tell Tomoko "that."

Tomoko turns and notices Yuri watching as she munches on her fry. Tomoko realizes that she has not talked to Yuri yet, though there is a lot of people. She starts to say, "Tamura," but then stammers a "Yuri-chan," and asks her if anything is wrong. Yuri responds that that question is her line. She then notes that Tomoko never replied to her LINE messages. Tomoko stammers that she only sent "how?" Yuri continues that she waited for both her and Yoshida. Tomoko slowly responds that she understands.

Sweating, blushing, but smiling, Tomoko then stammers "I-I'm home." As she starts to explain it is a joke, Yuri pleasantly responds, "welcome back." She then suddenly turns back to her table. Anna playfully points to the empty french fry container and notes that they are out. Yuri confesses that she ate most of them and offers to buy more. Mako offers to go with her, but Yuri assures her that she is fine.

She stands and notices the conversation at Tomoko's table. While Hina and Akane are in their own conversation, Katō mentions that Tomoko never did call her. Uchi watches as Tomoko stammers that she was kind of "busy." Katō suggests that Tomoko did call someone. 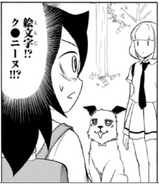 Shown: An Emoji and Her Dog 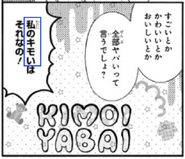