The cover depicts Tomoko standing in a group of Katō Akane, Hina, and Yuri underneath a Tanabata tree. On the other side of it, Minami happily runs with Mako. Further away, Kotomi Komiyama looks up at the tree blushing while Itō looks at her. Behind them a similarly blushing Akari looks up at the tree next to a smiling Sayaka. The narration underneath them reads: "As for wishes for Tanabata. . . ."

Numerous anonymous students hang their wishes from the bamboo surrounding the tree. From a window, Yuri and Tomoko stare down at them. Yuri remarks that they did it last year as well. Yuri asks her if she is not interested. Tomoko replies that she is not and is fine with it. Tomoko confesses that in the previous year she wrote and hung a wish. Surprised, Yuri asks her what it was. Tomoko explains that she thought she would write something interesting and funny, and Yuri asks if she had a friend who would see it. Tomoko admits that she did not, and when Yuri asks who she thought would see it, Tomoko tells her to forget it then changes the subject to ask "Yuri-chan" if she has any wishes. Yuri replies that it is not as if they would come true if she wrote them down.

Tomoko reads two of the wishes: "I want a girlfriend!"; "A boyfriend, please!" Tomoko muses that they are the same wishes as from last year. She hears, "Senpa-i!" behind her and recognizes "this . . . sugary sweet voice." Shizuku happily runs up from a group of boys to congratulate her on getting out of her suspension then asks her what she is doing. Tomoko replies that she is doing nothing in particular while thinking that Shizuku has even more boys staring at her. Shizuku chirps that it is Tanabata and all of the girls in class have written something down. Tomoko asks her if she wants to write something down together, and Shizuku squeals in excitement.

As Tomoko starts to write, she inwardly confesses that she still does not have anything to write down. While she denies it has to do with her earlier chat with Yuri, she does believe that writing a wish down will not make it come true. Shizuku stares at her and finally asks her what she wrote. Tomoko admits that it is hard to think of one when trying to write it. She asks Shizuku if she has any ideas. Bathed in anime light, Shizuku declares that hers has already come true: "Just getting to write a Tanabata wish with a girl friend . . . with senpai is fun enough. . . ." Blushing and sweating, Tomoko thinks that if she was a boy she would "NTR" Shizuku's relationship with her boyfriend, then wonders if she was born the wrong gender. Shizuku declares that she has a wish: she wants to become "closer to Senpai," and she wants Tomoko to call her by her name."

Tomoko asks if it is fine to call her "Hirasawa-san," but Shizuku replies that she would prefer her first name. Tomoko stammers, "Shi-Shizuku-chan?" Shizuku tells her that she does not need an honorific. Bathed in her own anime light, Tomoko calls her "Shizuku." Shizuku again squeals in delight that her wish came true immediately. She presses close to Tomoko and asks her if she has decided on her wish. Tomoko sheepishly replies, "maybe this," muses that Shizuku is a bit close, then concludes that Tanabata originally was an event where people used wishes as an excuse to flirt with people.

Above them, Uchi stares out of the window listening silently to Tomoko and Shizuku's conversation.

Miyazaki, the currently unnamed Girl with Glasses (Nagi), and Kayo stand near her. Miyazaki notices Uchi staring as Nagi and Kayo chat. Clenching her teeth, Uchi begins to furiously write. Nagi asks Uchi if she has not finished writing. Uchi angrily scribbles, "It doesn't get any more disgusting than my disgusting person on Tanabata!" "Ucchī?! What are you writing?!" Miyazaki exclaims in response, but Uchi quickly runs away. Miyazaki chases after her to find her hanging it on the tree. She demands to know why Uchi is hanging it when it is not even a wish.

Outside, Tomoko walks with Katō and Yuri. Katō remarks that she wants to stop by somewhere before they go to study. She takes them to the tree where they see three wishes:

She remarks that she figured she would write down everyone's wishes then rhetorically asks that they have not decided on their wishes. Tomoko stammers in the affirmative and inwardly admits that she lied but is glad Katō did not notice.

Yuri wanders through the wishes and notices that Tomoko wrote one. She figures that she should try to hide it with her head, but a light breeze blows it over her head so that it rests against her face. Katō notices it: "I wish that mine and everyone else's wishes are heard." Katō teases Tomoko that she wrote one.

Fūka angrily watches the three walk away. As Miho Narita jokes that she has written one that their friend with short blond hair giggles is a dirty joke, Fūka inwardly fumes that it is "Asuka and the Kuroki kid!!" and wonders if her suspension is over. As Katō and Tomoko walk in anime light, Fūka rages that Katō appears to have so much fun without her, then admits that she has been so curious about "that incident" she cannot focus on her studies. She wonders what Kuroki wanting to touch Asuka's hair means, and she confesses to herself that she wants to chase the two of them down and ask them.

The still laughing pair approach her holding onto one another. Their friend with short blond hair teasingly asks Fūka what she wishes for: "College? Boyfriend?" They see, "I want to know about Asuka's hair – Fūka," and demand to know if it is a dirty joke. An enraged chibi Fūka insists that it is not.

The following day Tomoko stares at the tree and notices that there are more tanzoku slips. She spies Fūka's and thinks she is the "kendō girl (剣道少女・kendō shōjo)." She recalls that Fūka asked about Asuka's breasts on the train but did not think she was "this much of a sleazebag. . . ." Still, she muses, she came to see the slips. Near Fūka's a slip reads, "I want to become a pro-gamer." She notes that last year was filled with complaints as well. She sees a wish from Kotomi who hopes the "underdogs will win," a wish from Itō who wants to keep observing people, and one from Mike wishing for the ability to cook delicious food every day. For this reason, she guesses that Tanabata is the event she looks forward to the most.

Hina calls out her name. She asks Tomoko if she wrote one, and Tomoko admits that she just wrote that she wants to get into college. Hina thinks that that seems normal. Tomoko asks her if she wrote one, and Hina replies that she wrote one with Akane the day before. They see one that says, "Become a voice actress (before I reach twenty) – Hina." Akane's wishes that she will have fun "every day." Yoshinori's reads that he wants to live life "my way." Tomoko asks her if the one with her name is hers, and Hina admits it. She then thanks Tomoko for giving her the courage to write down her true wish the year previously. Tomoko does not understand. Hina continues with a flashback of Tomoko standing on a ladder hanging a wish with help from Ogino the year previously. She admits that she was curious about Tomoko's wish, but she hung it too high.

Tomoko replies that it was not a serious wish, and she was only screwing around when their teacher found her and insisted that she hang it. Hina asks her what she wrote, and Tomoko admits that she is not that sure but thinks it had something to do with losing her virginity. Surprised, Hina asks if Tomoko is bothered by that. Tomoko insists that she just wrote it for the laughs and was not serious about it. Hina suggests that Tomoko has not changed much if she made weird jokes like that a year ago. Tomoko retorts that it must be tough for her, because since she wants to become a voice actress, she has to protect her virginity. When Hina demands to know what Tomoko is talking about, Tomoko flatly advises that "without a membrane, then she certainly cannot be a newbie idol voice actress." Hina retorts with the venerable Japanese assessment of intelligence (バカ・baka) then angrily asks if people who say the such things can really tell if a girl is a virgin. Tomoko admits that Hina has a point.

Hina then admits that she has one more wish. She reminds Tomoko that during their college visit Tomoko claimed that she wanted to write light novels. When Tomoko admits this, Hina hands her a blank slip and instruct her to write that down. Tomoko protests and starts to say that even if she writes it, but Hina insists that she just do it. After she writes, "I want to become a light novel authoress," Hina hangs it next to hers which reads, "I want to voice in an anime adaption of a light novel written by Kuro." Blushing and sweating, a chibi Tomoko complains that becoming a writer of light novels will prove tough enough, and the chances of having it adapted into an anime are pretty slim. Hina smiles and assures her that she can wish for whatever she wants.

Tomoko watches anonymous students carrying away the bamboo with wishes. One of them falls off and lands at Tomoko's feet. She calls to an anonymous girl who thanks her. Tomoko asks her what they will do with them, and the girl explains that they will burn them at the shrine, which was something the previous student council president did.

Alone, Tomoko looks up at the sky and admits that while she does not know if her wish will be granted, it would be nice if it was at least heard. 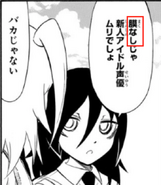 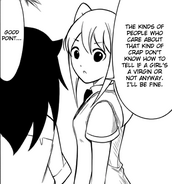 "Well allow me to retort!" 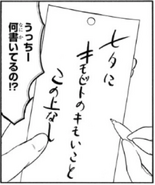 Uchi's Rant
In the Japanese Original™