In the cover page's scene, a bleary and sleepy Tomoko eats breakfast in her pajamas while her mother stands smiling behind her and outside the glass doors next to a basket of laundry. The narration reads: "Breaking into Summer! Sleepy as usual. . . ."

The chapter is broken into titled sections.

A sweaty and miserable Tomoko trudges to school. She complains to herself that it is hot and fully summer. She notices that she is walking behind a girl using an umbrella. The girl turns to reveal herself to be Asuka Katō. They both greet one another with Tomoko still stammering the "good morning" (お . . . おはよ・o . . . hayo). Tomoko remarks that with her parasol, Katō looks like a celebrity. Noting other anonymous girls with parasols, Katō replies with some surprise that she is not the only one. Tomoko admits that there are quite a few with beautiful parasols.

As she walks with Katō protecting them both with her parasol, Tomoko thinks that current high school girls do carry parasols. A little while ago, she muses, parasols and uniforms were items of girls of the chūnibyō set. Smiling, Katō interrupts Tomoko's thoughts to explain that since she is not very strong, being dark does not really suit her.

She then imagines the babbling Kii and Yuri with tans. She muses that with tans they would both lose their Japanese identities and start speaking like "natives." When she imagines herself with a tan, she fears that she would probably say something like "it looks smelly" and concludes that she should not get a tan.

Tomoko walks away from Ogino's desk with exam results as Kotomi Komiyama receives hers. The narration reads, "The results of the 1st semester's health and fitness exams." Tomoko reads results which come to a total of 84, and she is pleased that she received a good score without studying health. She walks down the class room aisle to the seated Yuri. She teases Yuri that she looks sullen which probably means that she also received a high score. Yuri protests that she is not sullen. Tomoko sees her score of 86 and declares it with surprise to be a high score as well. Yuri insists that it is not a high score. Tomoko looks at Hina and suspects that her score is probably not special. Hina looks back at her with a questioning smile. Tomoko sees that Hina's score is 64 and concludes that it is not special while Hina demands to know why she has that look.

Tomoko hears Itō marvel at Kotomi's perfect score. While Kotomi explains that there were a lot of sex related and sports questions, Tomoko continues over to Futaki, who silently studies her test with a score of 90. Ogino enthusiastically announces that the results of the tests give a school average of 62 while class 3-5 achieved an average of 78. She congratulates her class for taking the subject of "Health and Fitness" so seriously even though it is not a required subject. She then reveals that four students received perfect scores: Katō; Komiyama; Hatsushiba; and Tanaka. Mako blushes when her name is announced. Sitting next to her, Yoshida congratulates her for a perfect score in "Health and Fitness." The blushing Mako tries to demur that since it is a subject in Chiba West's exams she studied for it, and she is not really that good at it. Tomoko marvels that if she scored perfectly, she would have been brought into "Haramaku's Four Erotic Heavenly Kings!"

Norii stands at Sachi's desk. Sachi realizes that she forgot her textbook. Norii notes that the teacher is a Kawagoe who will be really annoying. Sachi declares that she will borrow it from Koharu. As she walks the corridor, she is surprised to see Hina, Yuri, and Tomoko walking together. Yuri appears to notice Sachi staring. Sachi arrives at Minami's class to see her sitting and working her phone. Smiling to herself, Sachi thinks that Minami acted so foolishly in the past only to be alone now as she recalls Minami assuring her and Maki that Yuri cannot hear her as they gossip behind her. Yuri clearly can. She then remembers walking past a seated Tomoko eating lunch as Minami laughs that Tomoko came to the cafeteria alone again. Sachi decides to tease Minami a bit.

She greets Minami with a "Koharu-chan!" Minami looks up and beams in excitement. She eagerly asks if Sachi is visiting her. Inwardly, Sachi wonders at how someone with such a terrible personality could have such an innocent expression. She explains that she simply came to borrow Minami's textbook. Minami looks and finds that she also forgot her own textbook to Sachi's disappointment. Minami excitedly asks where Mako is, but Sachi responds that she is somewhere else. Minami whines about what she will do then sees Wada and Suzuki.

Minami approaches Suzuki and asks if she can borrow his textbook for her friend who forgot hers. When he agrees, Minami proudly brings the Japanese history textbook to Sachi and boasts at how good she is with boys. Inwardly, Sachi marvels that it is these annoying aspects to Minami that prevents her from hating her.

Kayo leans against a corridor wall as she drinks from a juice box and asks Uchi if she knows Tomoko's brother and what she thinks of him. Uchi asks her why, and Kayo responds that he is a guy, and then asks if he makes her heart pound a bit. Uchi stares thinking a bit. Both see Tomoki walking towards them down the corridor, and Tomoki notices Uchi staring at him. When Kayo asks what she thinks, Uchi responds that he not only lacks "disgustingness" he lacks the potential for "disgustingness."

Tomoki inwardly rages that she is now insulting him.

Ogino asks Hina if she has a moment. She then gives her the key to the gym storage room and asks her to lock it and return it to the staff room. She helpfully adds that Hina can come anytime during the summer break. Hina cheerfully agrees while deeming the task annoying. Observing, Tomoko asks Hina if she can help her with something she may never get the chance to try again. After a view of the storage room, Tomoko enters as Hina confirms that Tomoko wants her to return in fifteen minutes. Tomoko explains that she always wanted to experience what it is like to be locked in a deserted storage room in school.

Inside, Tomoko looks for an escape route. Instead, she encounters a boy and girl together that WataMote Wiki is happy to report wore their complete school uniforms and were, therefore, studying college recommendations from Ogino . . . probably. Tomoko stops as the girl looks back at her in embarrassed shock while her boyfriend looks away. Blushing, Tomoko scurries away. She reached the door and whispers to Hina to let her out.

Hina does not reply.

She pounds on the door screaming for Hina to let her out. The next panel reveals that Hina left.

Tomoko walks home with Mako and Yuri and explains how Hina left her locked in the room. She is not certain that the boy and girl were going to engage in anything "erotic," but admits that that is not her concern. She does lament that it is her third summer, and it would be lonely to graduate without dating any boys. Mako agrees which surprises Yuri. Yuri reveals that Mako dated a boy during her first year. Mako sweats and insists that they only walked home together for a time and only went out once. She then explains that since it was the first summer of high school, "you needed to at least go out with someone, right?"

Tomoko inwardly growses that she certainly did not, but she does marvel that "even the Crazy Lesbo was like that." She then imagines herself with lighter hair and freckles like Mako and wonders if she had Mako's freckles and "communication power" would she be harmless to men?

Mako interrupts her musing by insisting that the same thing happened to Yuri. Yuri claims that she does not remember, but Mako insists that Yuri received texts from a boy in class who asked her for Yuri's e-mail. As she recalls receiving the message, Yuri insists she just ignored it since she did not know him. She then realizes with surprise that it was Mako who gave him her e-mail. While Mako merely replies that it is a fact, and a boy approaches them from the opposite direction, Tomoko inwardly complains that she is the only one not to have a "popularity episode (モテエピソード・mote episōdo)."

The boy is Kosaka, and he recognizes and greets the shocked Tomoko. He recalls that since she attends "Haramaku" she must be from the area. Tomoko stammers then eventually replies with a "hello." Mako smiles, Yuri looks suspiciously, but both give the two some space.

Tomoko finally asks Kosaka if he lives in the area. He replies that he is simply on the way home from college. He then asks if Tomoko's "little sister" is doing well. Tomoko does not correct him; she simply replies that she has been very energetic.

After he leaves, Yuri asks Tomoko if she knows him: "He appears to be in college." Tomoko replies that a lot happened and she gave her "first" to him during her first summer break. Mako and Yuri are surprised, and Yuri demands to know that her "first" was. Tomoko explains it was her first "prostration (土下座・dogeza)." Yuri asks "why," but Tomoko returns to her thoughts as she looks at the sky. She thinks that summer has a lot of memories: "Kii-chan" comes every year; she went to the beach and Comiket with Yū; and she had a handshake with a voice actor. This year she notes, she has "these guys" with her. While there may be no "guys" around, Tomoko does not believe she will be lonely.

Mako inwardly wants to know what Tomoko did to require a dogeza. 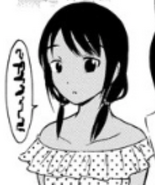 "You are welcome!" – WataMote Wiki 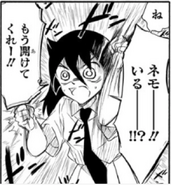 Shown:
Tomoko expresses her satisfaction with her data plan . . . probably.