The cover depicts the Girl with Short Hair with two other girls WataMote Wiki cannot currently identify in a classroom with the narration: "Before summer vacation, intensity after school."

Outside, the higurashi cry. Inside, a blackboard reads: "July 16" and "Only three days until Summer Break!" Kotomi approaches Itō who has her head buried in a pillow with cartoon bears on it. Kotomi asks her if she is tired; Itō mumbles that she is. Itō complains about cheering for the contests and baseball games. Kotomi expresses surprise that she is still going to a game even when she has a contest; Itō replies that it is only the first and second years until the second match.

As they talk, Tomoko walks by towards her desk past Hatsushiba. An anonymously drawn boy tells him to come to the clubroom during lunch since they are having an emergency meeting concerning Comiket. She reaches her desk and muses that even her "little brother" will be busy and coming home late due to tournaments.

She looks at two anonymously drawn boys, one of which resembles Kosaka. She wonders what she will do during the break. She guesses that she will study when Katō sits down holding a hand-held electric fan. She asks Tomoko if she attends a cram school. Tomoko admits that she does not. Katō mentions that Kaho invited her to attend. She begins to rhetorically suggest that if Tomoko is interested, to which Tomoko replies with annoyed "Eh?"

At Star Turry's, Tomoko and Kotomi join Yū. Kotomi looks at Tomoko's flier for a Summer Training Camp. Tomoko explains that she received it from a friend and anyone can take part, though they do separate people based on their skill. Kotomi is surprised to read that it has a study schedule of fourteen hours each day. Tomoko confesses that she wants to play all summer, but the guilt of having to take college entrance exams means that she cannot. She rationalizes that if she attends the camp and studies she can then justify goofing off for a week. Kotomi replies with a derisive "as if?!" Tomoko continues that everyone in class is enjoying their last summer of their youth, which elicits surprise from Yū. Playing nervously with her drink, Tomoko confesses that she wants to feel the same even if it is just studying, and since she never joined any clubs, she never went to any training camps.

She then suggests that Yū has been studying hard, then adds that if Yū goes to the camp, she will also.

To Tomoko's surprise, Yū cheerfully responds that she will.

Tomoko stares at Kotomi. When Kotomi demands to know why, Tomoko replies that she wonders what Kotomi thinks of the camp while denying that she really cares. Kotomi inwardy thinks that instead of a preparatory school training camp, she would like to attend a training camp at the Kuroki house as she imagines walking in on the changing Tomoki as well as sitting down at a table with Tomoko, Yū, and Tomoki. Tomoko breaks her fantasizing to suggest that Kotomi is thinking of something "creepy" and does not have to go. Kotomi stammers that she just needs to think about it.

The next day, Tomoko observes Yuri and Emiri Uchi walking together. She stammers a "good morning" to them,

and Uchi thinks, "First thing in the morning disgusting!" Tomoko asks if they are "close." Yuri responds that they were only walking together since they take the same train. Uchi thinks that while that may be true, Yuri's bluntness is why she has no friends.

Tomoko continues that she is thinking of attending the training camp Katō recommended. Yuri asks, "really," while Uchi exclaims, "training camp?!" Yuri muses that she might as well attend since without her Tomoko might just slack off. She adds that she does not expect Yoshida will attend but Mako might. Meanwhile Uchi inwardly repeats "training?!"

Her mind quickly recalls a montage from the night she shared a hotel room with Tomoko during their class trip to Kyōto: Tomoko staring at her when she sleeps, when she showers, and when she holds her damp panties. Shocked, she inwardly exclaims, "A repeat of that disgustingness?!!"

Uchi exclaims to them, "I'll go too!"

In class the next day, Tomoko tells Katō that she would like to go to the camp Katō mentioned. Katō happily asks if Tomoko has applied yet. Tomoko respnds that she has not, but she gave the flier to a friend from another school. Katō immediately asks if she is the friend who sent Tomoko penis pictures. Tomoko sheepishly confirms it is.

When the two step out of class they find Fūka Sasaki and Kaho standing by a window. Katō declares "perfect timing" as she asks Kaho for more fliers.

Kaho mentions that she was talking to Fūka about it, and Fūka responded that she might attend as well. As Kaho brings the flier up on her phone to show Katō, Tomoko notices Fūka sternly staring at her. She wonders what "this scummy bitch" is staring at, then suspects that she is thinking about the foliage decorating Katō's Road to a Christening. For her part, Fūka grouses about Katō and Tomoko coming as well. In a montage WataMote Wiki can only add but not describe, Fūka believes the camp will be her chance to settle the matter of Katō's front court, her back court rosebushes, and why Tomoko has suddenly appeared. Fūka announces that she will join the camp.

Tomoko walks with Katō, and both notice a group of second-year students walking down the stairs which includes Tomoki, Sayaka, and Akari Iguchi. Katō notes that they are cheering for the basketball team. Surprised that they are just leaving, Tomoko inwardly expresses relief that she is not a second year. Katō remarks that the first time they talked was when she called her about cheering on the baseball team. Tomoko confesses that she did not know it was her who called. Katō observes that she did not even know her phone number then, and now they both wish to attend the same university.

When Tomoko admits that if she had not met Katō, she would definitely not apply to Aoyama, Katō responds with surprise: "Do you mean that in a bad way?" Tomoko quickly corrects her that she meant it in a good way since, being negligent, she had intended to just skip the college visits and pick one at random.

With her eyes swimming and the higurashi crying, Tomoko tries to explain that by going with Katō she was able to decide to apply, just like she would not have chosen to attend the study camp if Katō did not tell her about it.

Without stammering, Tomoko reiterates that if not for Katō she would have picked a college at random without a having a goal in mind and spend her summer break lazing around. She concludes that she his glad to have met Katō and became friends.

Katō's expression lightens as she states that she is happy since she was worried since she thought Tomoko was just being considerate of her regarding Aoyama. She adds that she feared she may be forcing Aoyama on Tomoko. Though Tomoko stammers that while the studying is a bit tough, she emphatically claims that she really wants to go to Aoyama, "with you and everyone else." Katō smiles in anime light and responds that she wants to go there with Tomoko and everyone else as well. Sweating, Tomoko replies that they should all do their best during summer break.

In class, Hina comes to Tomoko's desk to announce that there is somewhere she wants to go with her during the break. Tomoko asks if it is to goof off, and Hina replies that she prefers to call it studying up on society. Katō smiles as she listens to Tomoko agree that since her summer break will be packed with studies, she will need a break.

Reina appears working her fingers as she announces that they will hit the arcade. Anna tells Futaki, who stands with Tomoko, that since she is taking exams, she can turn down Reina. Futaki insists that she wants revenge against Reina's previous game, and Tomoko indicates that she will go as well. She explains that she has made plans to study during the summer break, so she should have some fun while she can. Inwardly, she feels she has improved her mahjong skills reading manga.

Katō watches Tomoko leave with Reina and the rest. With a very severe smile, she wonders if Tomoko is useless if someone does not force her to do something. 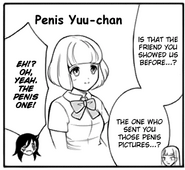