The blackboard reveals the date as July 19th: "Today Summer Break!" Akane, Hina, Yoshinori, and Wada stand chatting. In the hallway, an anonymous boy rhetorically asks Futaki if she is entering Shindai, and she responds that she did the day before. Further back, Uchi happily chats with Miyazaki while Nagi (currently the unnamed Girl with Glasses) chats with Kayo behind them.

Tomoko encounters Katō walking with Kaho. With a smile, Katō reminds Tomoko to do what they discussed during the summer break, and she will call her in the evening. Tomoko stammers agreement. At the classroom doorway, Mako informs Yuri that she has plans with Yoshida that afternoon and cannot walk home with her. When Yuri asks her what the plans are, Mako explains they are career planning.

Yuri walks up to Tomoko and suggests that they go home. As Tomoko agrees, Yuri's phone rings. Her phone shows a text from Hina suggesting that since they have not gone home yet, so they should meet at the bus stop by the park.

They find Hina with Akane waving at them at the bus stop. Tomoko asks them where they are going, and Hina responds that since summer break starts the next day, "over there of course (あそこでしょ・ asoko desho)!"

The next panel reveals the beach.

Both Tomoko and Yuri flatly note that it is the beach, Akane off-handedly mentions that she came there last year, but Hina smiles brightly.

Yuri explains that since they aim for different universities, she and Tomoko do not have time to fool around. Hina retorts that Aoyama and Moringa are about the same. She continues that they did not come to the beach to play. She places her bag on a table and explains that studying normally during summer break would be boring. She continues that they might as well enjoy studying while enjoying the summer with the beach at their side, because they do not come often since it is a 10 minute bus ride.

They sit for a while studying. Yuri complains that it is "hot and sweaty," and she would be able to concentrate better if she was at the library. Hina asks her to try listening. After a moment, she asks Yuri if she can hear the waves. Yuri asks what about it; Hina genially claims that the sound of waves promotes "alpha waves (α波的・alpha hateki)" which promote concentration and relieve stress. Yuri suggests that they could just listen to the sound of waves on their phones, but Hina insists that real waves are better.

Yuri then asks Tomoko what she thinks. Tomoko responds that it is not that bad, since while it may be Chiba's beach, "stopping by a beach on the way home from school feels like youth." Yuri mutters in response as Hina delightfully declares that "Kuro" understands her. She then chides "Tamura-san" for always complaining. Yuri retorts that it is because Hina will not shut up. Akane happily observes that Yuri is really talkative. Yuri denies it while Hina thinks, "Ā-chan . . . I know you mean well, but. . . ." Akane continues that Yuri has never really talked before, so she had no idea. Tomoko muses that "gloomy types" like Yuri always have things pointed out to them unnecessarily, such as "you're a real fast talker," or "Ah, OO-san can smile too," or even "OO-kun is funny!"

Yuri remarks that she is thirsty and will go buy some drinks. Hina helpfully announces that she will accompany her since Yuri does not know where the vending machine is located. She then asks the others what they would like.

After obtaining the drinks and studying for a bit, Hina pulls out her phone. Yuri asks her what she is doing, and Hina explains that since there is no wind that day, "the waves are pretty quiet." She pulls up the sound of waves to help them concentrate. Tomoko produces her phone and declares that she will add some of her summer sounds. All lay down their phones and fill the area with their sounds. Akane finally declares it annoying, Hina laughs, then Yuri chuckles.

"Tamura smiled!" Akane happily declares, then points it out to Hina. Hina sweats and thinks, "Ā-chan . . ." while Tomoko muses that she just made a "Hey, look, (that loner) OO-kun is smiling!" phrase. Yuri only looks down in silence.

After some study, Hina observes that even though they will all be studying for the college exams, it is pretty nice that they do not have to go to school the next morning. Akane agrees, but Tomoko is surprised. When Akane asks her what she means, Tomoko sweatingly explains that, "Nemo" aside, she thought Akane had people she wanted to go to school with every day. Akane replies that since it is a break, taking a break would be better. She admits that since it is a break, she just wants to get together with some close friends and laze around. She continues that, aside from studying, school has a lot of "bothersome stuff." Tomoko agrees, then muses to herself as she and the rest study that while she guesses that everyone would feel that way, only now does she realize how obvious it is.

Hina stands suddenly to declare it hot, that it is time for a break, and they should all go into the ocean. Tomoko, Akane, and Hina rush in while Yuri sits watching them. Hina encourages her to come in to the "cool and nice" water, but Yuri dismisses it as "dirty." Hina instead starts splashing Tomoko, who protests that it is dirty. Hina scolds her for calling the water dirty. As Akane watches with a confused look, Hina tells Tomoko that she wants a picture of the four of them together, suggesting that if Tomoko asks Yuri, Yuri will join them.

Tomoko wades over to Yuri and invites her in by insisting that the water is shallow and will only come up to her ankles. Specifically, she states that Yuri need only go up to the "tip" (さき・saki) of her foot, which Hina finds salacious. Yuri responds with a nonplussed "If you say so, Tomoko," which further irritates Hina. However, Tomoko persuades Yuri to stick her feet in the water which, WataMote Wiki insists, has no other meaning. Yuri still complains about seaweed which feels gross on her feet and which, WataMote Wiki insists again, has no other meaning. Hina immediately calls the two of them to join her for a picture.​​

Seaweed around her ankles causes Yuri to fall onto Hina. Tomoko, Yuri, and Hina end up in the water, which has no subtext whatsoever, with Hina still holding her phone to take a picture and Akane looking concerned.

Chibi depictions of their faces complain: Yuri blames Hina; Tomoko reminds Yuri that she is also to blame; Hina happily suggests to Akane that she also get in the water; Akane worriedly asks "really?"

They resume their studying. Someone, probably Akane, complains that their skirts are not dry yet. Someone else, probably Hina replies that since they are studying until the evening, it is a good feeling. Tomoko complains that their skirts will smell like the sea. Hina reminds her that since it is summer break, it will be fine since they do not have to wear them. A bell rings, and Akane recognizes that their baseball team won, which means they will have to cheer them in the morning. Hina reacts with surprise.

Above the picture of them Hina took on her phone, one who is probably Yuri still blames Hina, who protests that since it was fun it was alright.

Shown:
Where WataMote Wiki wishes it was 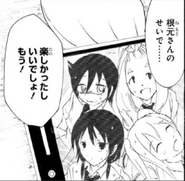