Tomoko arrives at the Chiba Lotte Marines stadium to meet Yuri, Mako, Akane, and Katō. Katō greets her, then Akane announces that Hina said she would be late and they should go on without her. Katō suggests that they will all meet up in the stadium anyway. As they walk, Katō remarks that Tomoko's uniform smells like sea water. Tomoko sheepishly claims that Hina squirted her with a smelly liquid the day before. Akane scolds Tomoko for making it sound weird and insists that they were all just playing at the beach.

Surprised but smiling, Katō rhetorically asks the embarassed Tomoko if she did not claim she had been studying. Akane insists that they did go to the beach to study. Yuri unhelpfully introjects that she could not really concentrate and did not get much studying done. Mako replies with a "Yuri!" while Tomoko inwardly rages about her bringing it up. Katō merely smiles and delightfully suggests that they will have to pick a better place to study next time.

Hina finally joins them in the stands and apologizes that it took awhile for her skirt to dry. An irritated Akane  expresses surprise that Hina washed her uniform, and she claims that she just wore her winter uniform. One of them remarks that they are at a different stadium from the year previously, asks if the professionals also play, and then observes that the other school has a number of supporters. Kotomi, who is sitting next to Akane, begins to lecture that according to what she read, all matches between the top eight teams will take place in the Marine stadium, and Nagashino High School, their opponent, has the second-best baseball team in the prefecture next to Kisaragi High. She adds that their band is also famous. Hina politely replies while the rest remain silent. Kotomi continues to lecture about their opponent while Tomoko inwardly rages about her still talking, deeming it as awkward as the time they went to a game with Yū.

Katō smiles and politely listens. She then compliments Kotomi on her baseball knowledge to Tomoko's silent irritation. Kotomi admits that she is mostly a Lotte fan who reads up on high school baseball. Tomoko looks around and inwardly curses that normally Kotomi's "handler" (係・gakari), picturing Itō, is around to control her. She then sees Itō sitting with the band and curses her for abandoning her job as "Komi-something handler!"

A nonplussed Fūka walks by them in her cheerleader uniform and only greets Katō. When Katō asks her what she is doing, Fūka explains that while only the first and second years were suppose to go to the matches, the rest of the team begged her to come as well. Katō laughs and claims she forgot how "super popular" Fūka is with the underclassmen. As Miho Narita dances to the cheers of boys, Fūka acidly observes that she is not the only third-year student there.

As Fūka stands in front of them irritated while watching at Miho attract attention, Tomoko starts to look under her skirt which Katō notices. Tomoko muses that she cannot believe Fūka is wearing such a revealing outfit which makes her appear that she is asking to be raped.

Suddenly Uchi, sitting with a megaphone next to Miyazaki, shouts out to "That Ponytail (そこポニーテール・soko poniitēru)" to watch out that Tomoko is trying to look up her skirt.

She then loudly accuses Tomoko of trying to do the same thing to her in the past. Tomoko inwardly rages at "this fucking Emoji (あんのクソ絵文字・anno kuso emoji)" wondering what is her grudge. Fūka expresses surprise that Tomoko is not "just after Asuka." For her part, Katō pleasantly, but rhetorically, asks Tomoko if she tried to peek under her skirt during the sports festival.

A stunned Tomoko claims she does not remember as she recalls in her mind the incident from over a year ago. Yuri calmly asks if that is her fetish since she keeps peeking up Yoshida's skirt despite the fact that she gets beaten up every time. Tomoko inwardly rages at Yuri for revealing that while Katō pleasantly smiles and Uchi continues to broadcast that Tomoko is "Disgusting!  Disgusting I tell you (キモい! キモいよ!・kimoi! kimoiyo)!"

Hina adds cheerfully that Tomoko tried to peek under her skirt as well. Calling her a pervert (変態か・hentaika), a sweating Fūka angrily claims that she thought Tomoko was just interested in Asuka. A stunned Tomoko exclaims "what?!" She then retorts that it was Fūka who wrote that she wanted to know about Asuka's "hair down there" as her Tanabata wish. Fūka demands to know how she knows, but Katō appears legitimately surprised.

Blushing, Fūka insists that it is not what she thinks. She claims that she was first "curious about your boobs," then starting thinking about her hair, "and I just couldn't stop thinking about it so . . . I'M THE VICTIM HERE!" Katō calmly replies that she has no idea what Fūka is trying to say. Kotomi interrupts them to remind them all that the team is doing their best and they should stop bickering and cheer them on. Katō and Fūka agree while Tomoko inwardly screams that Kotomi is a "Lotte-obsessed pervert too" so she should stop pretending that she is the reasonable one.

They watch the game as Kotomi provides a running commentary. Everyone follows the game but Tomoko who looks sheepish while Yuri stares at her. Tomoko accompanies Hina to get drinks and they both watch the progress of the game on a television screen. They return by the bottom of the ninth with Nagashino as the visitor leading their team Hara-Maku 3 to 0. Kotomi continues her running commentary to Tomoko's irritation.

Miho sits dejected with ice on her head declaring it is so hot she does not want to do anything. Fūka unhelpfully suggests that she at least get out of her way. Kotomi walks by Itō and admits that it was not meant to be. The manager girl asks everyone to stay for one last cheer.

The collection of Katō, Akane, Hina, Tomoko, and Yuri make their way with them discussing how close but far their team went in the tournament. Hina suggests that since it is only noon they should do something before returning home. Akane suggests that they stop someplace. Tomoko and Yuri pause. Tomoko thinks that the year prior she just wanted their team to hurry up and lose "but. . . ."

Katō suggests to Hina that they get lunch. Tomoko thinks that this is her last summer and she wants to make it last as long as possible. She suddenly suggests that since they are already in their uniforms and not far from school they should go their to study. Katō is pleasantly surprised. Hina admits that she never expected Tomoko to suggest studying. Tomoko claims that seeing their team try their best motivated her to work harder.

Yuri protests that Tomoko spent the whole match staring at the cheerleader's panties; Tomoko insists that she started watching from the "second-half on!" Katō giggles that if looking at Fūka's panties motivates her she should call her over. Tomoko asks her not to treat her like a "panty prostitute (デリバリーパンツ要員・deribarii pantsu yōin・literally: "delivery panties personnel")!"

She looks at Yuri who looks back at her with some surprise. Tomoko thinks that she does not want this plain, but enjoyable, summer to end. 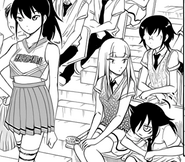 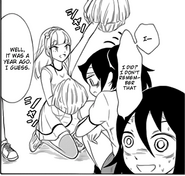 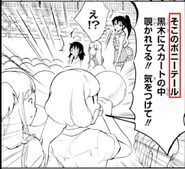 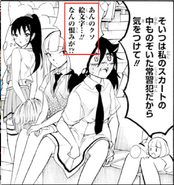