The cover depicts Tomoko holding a Popsicle while looking guilty as she look at a grove of sunflowers outside her house. The caption reads, "One Summer day. . ."

As the higurashi cry, Tomoko awakens early at 6:10 A.M. Sleepy, she thinks that even though it is Summer Break, she woke early. She muses that she could go back to sleep, but she instead walks outside. She passes children engaged in the radio exercises in the park. She makes her way to the convenience store where she peruses the magazine and manga section. She laments that she came to the store to read some manga to help wake herself up, but she has already read all of them. Looking at the magazines, she does not suspect she can find one that she can read for the price of an iced coffee. She finds a "weekly men's magazine (男の週刊誌・otoko no shūkanshi)," and observes that it contains pictures of women worthy of the "Jump" manga. She marvels at the titles of the articles: "A Solution to Your Penis Problems!" and "Masturbation is Training for Sex!" Tomoko finds this interesting though the information will not apply to her everyday life.

Back at home with her iced coffee sitting next to her English sentences textbook, Tomoko declares that the walk, coffee, and magazine viewing has at last awoken her. She adds that she did find the "Penis Information (ちんちん情報・chinchin jōhō)" really stimulated her senses. Now all she needs is the proper motivation to study. Her mind wanders to how she previously failed to follow through on a task during Summer Break: start by playing a game; then watching videos; to only find herself at night ranting that she has wasted the entire day. She vows that she must study to avoid such a "despair-filled future." A few-panels depict her studying over time. She finally collapses on her bed and wonders if she could concentrate better with a cigarette. She pretends to take a drag, then declares that she has taken her puff and now most return to studying: "or something like that."

Her phone rings with a call from Yū. She asks Yū what she is doing and is shocked to hear that Yū is studying. Yū responds as her computer has both Itō and Kotomi open in video chat that she wanted to catch up before attending the study camp with Tomoko.

Tomoko then wonders if Yuri is studying. She calls her, and Yuri admits she is not. Tomoko triumphantly declares "Alright!" When Yuri asks her why, Tomoko replies that she knew Yuri would not be studying. Yuri protests that she was just before then. Tomoko suggests that it is hard to concentrate on one's own. She suggests that they study together, and when Yuri asks if it is okay if she comes over to Tomoko's house, Tomoko replies that she does not need to. Musing to herself that the "Lotte Bitch (ロッテ野郎・rotte yarō)" mentioned studying over Skype, she suggests to Yuri they can study over Line.

Tomoko looks back at Yuri apparently looking down on her in her window on Tomoko's computer screen. When she asks Yuri if she is, Yuri confesses that it is the angle of her smart phone. Tomoko then muses that video chatting is a bit erotic. Tomoko adds that it looks like Yuri would show her her cleavage (片乳・kata chichi) if she asked; Yuri demands that she not be stupid. Tomoko continues to ask if, though she is at home, Yuri is wearing a bra and what color it is. She then asks if Yuri could show her her shoulder strap. Yuri continues to "loom" down at her, and Tomoko asks her if she is upset, which Yuri denies. As the higurashi cry outside, Yuri reminds Tomoko that they are studying to which Tomoko agrees.

Tomoko and Yuri do commence studying. After some time, Yuri stands up and states that she will be right back. Tomoko watches Yuri's empty room for a bit. Yuri returns to find Tomoko's room apparently empty. She wonders if Tomoko went to the bathroom.

As she sits studying on her own, she starts to hum a tune. Meanwhile, a surprised Tomoko lurks out of sight of her computer video camera ready to remove her shirt. She muses that she had intended to suprise and amuse Yuri by jumping in view and flashing her, but instead she saw something "weird."

She makes a coughing sound as she sits back infront of her computer. She pretends that the air conditioning may have given her a cold. She notices Yuri looking down and begin to blush severely. Ever helpful, Tomoko suggests that Yuri is not at all tone-deaf (音痴・onchi), and her humming was pretty good even if Tomoko does not know the song.

Yuri silences her by pounding her fist hard next to her phone. Still blushing, she sheepishly reminds her that they are studying. Inwardly, Tomoko surmises that Yuri would have wacked her if they were in the same room together.

Tomoko lies in bed pleased by a dinner after a day of work. She realizes that she studied for seven straight hours, which is more than she would study before a test. She stops herself from falling asleep since she has one more goal. She walks past the park and notices that there are no cats. She arrives in the convenience store. She looks again at the men's magazines and finds their various claims amusing. With another iced coffee she returns to studying.

A smiling Hina watches television as her phone rings. Tomoko announces that she has been studying for about ten hours and is now relaxing watching an anime she expects Hina may also be watching. When Hina states that she is, Tomoko suggests that that they watch it together. Tomoko requests that Hina give her a rundown of the series like a special audio commentary done by voice actresses.

Hina describes the different stereotypical female characters. Tomoko focuses on one whom she claims had her body modified to have her erogenous zone sensitivity (性感帯の感度・seikantai no kando) increased "4,000 times." Hina snaps back that she is refering to the eroge game she made her play. When Hina demands to know if Tomoko is even watching the anime, Tomoko apologizes for being a bit "high (ハイ・hai)" from being tired.

Hina continues to describe the black-haired protagonist who has become more communicative like "Kuro" has. She then describes another character with purple hair who shows up often, then summarizes the anime as one where "these five just talk."

When she continues without hearing any response from Tomoko, she checks her phone to see that Tomoko has fallen asleep. While disappointed that Tomoko did not finish the anime with her, she looks so content Hina decides to let her sleep. 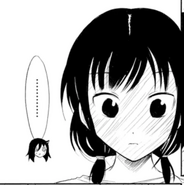 "You are welcome!" – WataMote Wiki
Add a photo to this gallery

Retrieved from "https://watamote.fandom.com/wiki/WataMote_Chapter_167?oldid=22535"
Community content is available under CC-BY-SA unless otherwise noted.