Tomoko stares out her window at the heavy rains and concludes that she will not be able to go to the convenience store. Elegantly dressed Akari Iguchi and Sayaka appear at the door. Sayaka gives a happy greeting while Akari stammers a more formal apology for their intrusion. As a nonplussed Tomoki leads them inside, Sayaka observes that this is the first time Akari has entered Tomoki's home, or any other boy's for that matter. Sayaka asks if Nakamura has arrived yet, and Tomoki responds that he has not.

In a flashback in school before the Summer Break, Sayaka observes to Nakamura that since the Soccer Club will not meet on the first Thursday of the break, they can work together on homework. She argues, given how busy the Soccer Club will be, it is better if they all get their homework completed. When Nakamura asks who is "everyone (みんな・minna)," Sayaka helpfully replies the two of them along with Tomoki and Akari. She helpfully suggests that Tomoki's home is the most convenient and then turns bathed in animesque lens flare to slyly smile and flash a peace sign at Akari.

Back in present time, Akari calmly wonders if Sayaka has become really irritating recently. In middle school she always thought that Sayaka acted this way for her sake, but now in high school, she has noticed how overbearing it can be. Sayaka whispers to her as they sit at a table with Tomoki to promise that once Nakamura arrives, she will lead him away so Akari will be alone with Tomoki. Akari whispers back that she is fine while inwardly ranting that she does not need her friends trying to cheer on her love life or, especially. whispering in front of Tomoki. She wonders about being in Tomoki's room for the first time to only be thinking of Sayaka's behavior and observes that even though she is in Tomoki's room, Sayaka has put her in a foul mood.

Both Tomoki and Sayaka's phones buzz. Nakamura texts both of them that since it is raining so hard, he is going to take a pass on coming over. Tomoki inwardly fumes that the "bastard" should not agree to hold a session and not show up. Sayaka reads her text and inwardly moans that though she dressed up for him, he will not even bother to show up. When Akari asks her if she is okay, Sayaka reminds herself that this is really about Akari and Tomoki.

Sayaka then attempts a number of lame excuses to leave them alone. She first claims that she left her textbook at home; Akari sees through this and reminds her that she brought her own.

Inwardly, Akari condemns her for making it appear that she is makling it look like she is asking Akari to hook her up with Nakamura.

These excuses continue until Tomoki asks her why she even came over. Sayaka inwardly complains that she is doing this for their benefit and produces the game Twister. Akari complains that that is a game for children, and Tomoki again asks her why she even came. Sayaka inwardly protests that she has only been doing her best for their benefit. She imagines them all playing the game together with a blushing Akari under Tomoki.

"He's not coming at all!" she thinks as she starts to cry to Tomoki and Akari's shock. Akari quickly reassures Sayaka that she did it so they could all have fun, then eagerly suggests to Tomoki that they all play together. Ever unable to read the mood, Tomoki refuses.

From her room, Tomoko leans outside her window to extend her phone tied to a meter stick to film what is going on in her brother's room. Inside, Akari is playing Twister and encouraging Sayaka to call out the next color. Watching the resulting video, Tomoko muses that she thought she heard the sound of girls, but now she realizes that they are the "Dick Sisters (ちんちん妹・chinchin imōto/shisotā)," along with "Dick Buddy" (ちん棒・chinbō), her new nickname for Tomoki. Tomoko recognizes the game Twister and, enraged, feels it is a game for foreplay which will bring disrepute to her home. Deciding to fight poison with poison, Tomoko calls Kotomi while inwardly hoping she has not just released an even greater poison.

Itō sits at her computer studying. Her screen reveals she is studying with Kotomi and Yū. A phone rings, and Kotomi apologizes for taking a call. She explodes, "Eh?! Akari-chan?!!" She starts to calm down when she realizes that Akari and Tomoko are not alone only to scream, "Twister?!!"

She denounces Akari as a "sow" who looks sweet, but she always knew was a perverted swine! She declares that she will be over in 40 minutes, but then quickly vows to be there in 30 minutes or less.

Starring at her screen, Itō feels that even though she is not there, she can sense the "cringe."

In the pouring rain, Yoshida rides her motorbike. As she grouses that she decided to go for a ride since she was bored, but the weather is completely wrong for riding, she recognizes Kotomi running down the street. When she confirms who it is and asks Kotomi why she is out in the rain storm, Kotomi merely screams for her to give her a ride.

They arrive at the Kuroki house. Kotomi immediately demands to know where the "sow" is. Tomoko notices Yoshida who explains that she came upon Kotomi who then demanded that she give her a ride.

Her mother enters and notes that Tomoko's friends are soaked. She instructs her daughter to lend them some clothes while she dries theirs. Inwardly, Tomoko complains that she does not want them using her bath while Kotomi tells Yoshida that she really should not ride her bike in such weather.

Meanwhile, a tired and blushing Akari sits on the Twister mat. Sayaka scolds Tomoki to join her, but he persists in his refusal. A sad Akari thinks "Tomoki-kun," as Sayaka inwardly realizes that Akari is making her "read the mood face."

Tomoki washes his face in the bathroom sink as he vows to kill Nakamura.

As he rages, he turns to find a naked Yoshida emerging from the bath. An enraged Yoshida demands to know why he is there, while Tomoki inwardly complains that that is his line.

Kotomi bursts into Tomoki's room to find Akari and Sayaka. She loudly announces that she got the wrong room, then recogizes it is Tomoki's, then demands to know where he is.

A shocked and embarrassed Akari can only ask why "Senpai" is there. 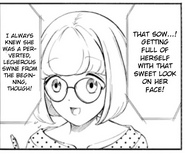