Maki appears in a picture on a phone with a similarly anonymously depicted boy who appears to have the name "Taku." Both have cat ears and whiskers added. The hand holding the phone belongs to Sachi who smiles and judges the two "annoying" as she sits in a booth in a restaurant. She marvels at an "idiot" who would start dating during her third high school summer vacation then deems the boyfrind "ugly (ブサイク・busaiku)."

She continues to inwardly grouse that Minami is not the first one to arrive given that she invited everyone to study. She feels sitting alone in a family restaurant makes her appear to be a loner, but it is too hot for her to wait outside. She then wonders why Nori and Mako are late.

Mako arrives apologizing for being late. She notices that Minami has not arrived yet. Sachi complains about Minami being late when she is the one who invited them. Mako tries to smooth it over by admitting that it certainly sounds like Minami. Sachi then asks her if she heard that Maki has a boyfriend. When shown the picture, Mako cheerfully observes that Maki looks happy. Smiling, Sachi asks her if boyfriend reminds her of a person on television whose jaw juts out. Mako does not see any similarity but thinks he looks like a "kind guy." Inwardly, Sachi thinks it is boring that Mako does not "badmouth (悪口・waruguchi)" others.

In a blast of anime stars and light, Minami arrives, dressed in a fashion which WataMote Wiki cannot describe, while excitedly holding her phone with the picture of Maki and Taku. After making a brief apology, she asks if they have seen Maki and her new boyfriend. Sachi eagerly agrees that he looks "uncool" and is too tall. Minami immediately quips that it is probably not just his height that is "tall!" Sachi giggles that it is probably just his height, then remarks that she was just explaining to Mako that he looks like someone with a "jaw (アゴ・ago)."

Minami immediately recognizes him as the censored in the Japanese "Einstein (アイ●シュタイン)." Sachi continues to observe that Nori is late, then quips that Nori always is, then rhetorically asks if putting on makeup really take that long? Minami replies that it does, and she really piles it on.

Inwardly, Sachi thinks that "Koharu-chan" is the best.

Mako inwardly thinks that "Minami-san" is "pretty bad," but then suspects it comes from being raised in a bad environment. 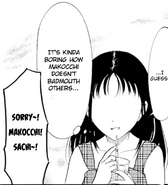 Not Shown "A Friend" 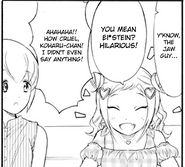 Also Not Shown: "A Friend"
Add a photo to this gallery

Retrieved from "https://watamote.fandom.com/wiki/WataMote_Chapter_169.5?oldid=21769"
Community content is available under CC-BY-SA unless otherwise noted.