A view from outside her home shows Tomoko's bleary eyes just above her laptop through her window. The narration asks, "studying in midsummer, is too dull?"

Tomoko looks up from her desk and thinks that the third-year summer vacation is pretty dull since it involves nothing but studying. She laments that she wants to do something flashy then calls out to her mother to ask to borrow some money for snacks.

Tomoko makes her way to the convenience store. As she walks with her basket of snacks, she thinks that she should also buy some coffee when she enters the section of hair dying products.

She stops and thinks.

Back home in her room with her plushie, she reads the instructions while thinking that she just needs to make the dye, lather, then rinse. In the process, she suddenly thinks that dying her hair silver will be too much but then realizes that it is summer and she can dye it back to black. She rinses to see to her surprise that her hair has not changed.

She calls Yū to ask her how she dyed her hair. Yū replies that she went to a beauty parlor. Tomoko explains that she was bored. She then insists that she is fine and will still do it herself, but when she ends the call she thinks that Yū forgot to tell her something. She accidentally calls Asuka and continues her conversation asking what color she should dye her hair. They quickly clear up the misunderstanding, and Tomoko explains that she was bored and thinks changing her hair color will change the pace and help her study.

Asuka offers to do it for her. She reveals that she dyed her hair herself when she was in middle school. When she then adds that it is difficult the first time, and she did want to give Tomoko some new flash cards, Tomoko agrees to let her do it.

After the call, Tomoko thinks to herself that Asuka is actually visiting her. She looks at her floor and concludes that she should be more concerned about her hairs there and resolves to clean.

To her surprise, Yū arrives. When Tomoko reminds her that she said that she would dye her hair herself, Yū insists that she always wanted to do something like this for her. Tomoko imagines Asuka arriving to find Yū has already dyed her hair. Her mind further wanders into the salacious by thinking that she could then invite Asuka to dye her pubic hair only to wonder if Asuka would instead rip them out!

Returning to reality, Tomoko realizes that she needs to tell Yū that a high school friend is visiting when the doorbell rings again. Tomoko rushes to change into a shirt.

Asuka apologizes for being late while Tomoko notes how fast she arrived. She invites Asuka upstairs.

As she follows her, Tomoko cannot help but stare at Asuka's shear skirt and think that having her over seems kind of lewd: "I guess it actually is lewd, though . . ."

They find Yū sitting at Tomoko's table. Tomoko apologizes for forgetting to mention that her friend from middle school is here. Asuka greets her as the friend she has heard Tomoko mention frequently, and the two formally introduce themselves as Tomoko sheepishly watches. When Asuka asks Yū which school she attends, Yū responds that she attends Makuharihongō High because she is not as smart as Tomoko. Asuka asks her if she knows a "Sawa" or "Mei," and Yū happily reveals that she knows "Sawa-chan." As the two chirp and bubble, Tomoko thinks that it is rather arousing to have two beautiful girls in her room. She muses that this is what "ugly pigs" feel like watching moe anime.

Asuka looks at Tomoko and remarks that she had thought Tomoko would be alone. Since "Naruse-san" is there, she cooly but politely asks if she is interrupting. Yū quickly apologizes that she came on her own when she thought Tomoko would try to dye her hair on her own. Asuka seems to accept with a smile that neither of them expected the situation. She claims that she, too, came over to help Tomoko. Asuka then confesses that part of her wanted to tease Tomoko, "since she's so cute." Yū agrees that "Mokocchi" is cute but "not stylish." Sweating, Tomoko wonders if the tense mood can change so easily. Asuka then asks Tomoko what color she wants while producing a box of one of the ones she uses. Looking at the boxes, Tomoko confesses that both "Yū-chan" and "Katō-san's" colors would be nice. Inwardly, she feels that compared to the silver color, both of their colors are pretty much the same. She then muses that silver would never work since only Russian, emo protagonists, and live-action Akagi have silver hair.

Looking at both Yū and Asuka, Tomoko thinks that if she must pick a color, then vocalizes that she wants the silver she chose.

Asuka remarks that it might suit her as Yū quickly agrees. Tomoko explains that she thought she would dye it during the summer, and silver will make her look intellectual while thinking that she might hit it off with other students at the study camp.

Both Asuka and Yū help her prepare for coloring. A montage of them with anime sparkles working the process ends with Tomoko with her hair wrapped in cellophane as the dye sets. Tomoko makes a joke about how much she owes the two only to notice that Asuka sees one of her pubic hairs on the floor. Tomoko inwardly curses about missing it despite her cleaning then marvels that Asuka does not seem to react as Asuka starts a conversation with Yū about attending the study camp.

With a salacious look, Tomoko stares at the container and declares that there is a little bit of the dye left. She explains that she will go and wash it off along with her face. After she departs, Asuka asks Yū which college she wants to attend. Yū stammers a bit then asks her not to tell Tomoko that she is also aiming for Aoyama Gakuin University. Asuka asks her why she should keep it a secret, and would not studying together make more sense. Yū stares off and confesses that she feels it is a bit tough for someone at her level and she does not want to drag down Tomoko.

Bathed in anime sparkles, the naked Tomoko stares at herself and her dyed hair. She marvels at the color and feels it gives off the feeling of "I've done it now." She then notes that she has "other hairs" that she needs to dye and guesses that she can use the wrap with the leftover bubbles.

Sitting with Yū and Asuka, she thanks them that it dyed nicely due to their help. Asuka suggests that her hair might be even cuter if they set it for her. Tomoko sheepishly laughs and adds that she may let them do that for them later. Asuka then produced a bunch of new flash cards. She tells Tomoko she will give them all to her at once so she can memorize them over the summer. When Tomoko returns the cards she previously borrowed, Asuka lends them to a surprised Yū and suggests that she can return them when they attend the study camp the following week.

Suddenly, Tomoko has a look of shock and pain to Yū and Asuka's surprise. Asuka asks her what is wrong since she really is sweating. Tomoko starts to stammer first that her "crotch" (股・mata), then quickly changes to "stomach," hurts. She excuses herself sweating and clutching her nethers.

After an awkward pause, Yū's phone bleeps. She sees a message from Tomoko that instructs her to come to the downstairs toilet and not tell Asuka. Yū excuses herself. Alone, Asuka gazes about Tomoko's room. She notices she has her large plushy toy places as if it is resting on her plushy pillow. Asuka touches it and smiles.

Yū and Asuka walk together near the park. Asuka suggests that they talk a bit. They sit on the swings, and Asuka remarks that Tomoko talks a lot about her. She then reveals that that includes how she often sexually harasses her when they study. Yū responds with a nervous, "I-is that so?" Asuka continues to note that when Tomoko was suspended, she did not contact anyone at her school, but she did talk to her. Yū admits she did.

Yū explains that the reason Tomoko did not tell her about it is not because they are not close but because she does not want Asuka to see her faults. She then reveals that before Asuka came over, Tomoko ran a roller all over her room then got fully dressed. She has not seen Tomoko ever do that recently. With another flashback, she continues that Tomoko sent her a photo of herself after someone did her make-up: "That was you, Asuka-chan, wasn't it?" She continues that Tomoko was so happy that a "flashy" girl in her class did it for her. She then suggests that the times when Tomoko tries to be stylish are the times she is around Asuka, and that is how it was today. There are thinks Tomoko only show her, she explains, and things she only shows Asuka. If anything, she concludes, she should be jealous of Asuka since she rarely gets to do anyting "girly" with Tomoko like they did today.

Asuka thanks her and admits that Tomoko always seems reserved around her. Yū suggests that Tomoko is pretty precious to Asuka. Asuka admits that she is. Asuka then remarks that she wishes to attend the same university and offers to help Yū study. Yū again suggests that at her level she will only drag down Asuka. Asuka smiles and tells her it will be fine. She is flexible and feels that Tomoko needs Yū as well. It will be tough, but Asuka vows that it will help her to get a little closer to Tomoko as well. Yū thanks her and vows to do her best.

Five days have past, and Tomoko sadly inspects her black hair. She curses that her mother became angry and forced her to dye it back. She could have at least let her stay silver-haired until the study camp, she gripes. The doorbell rings, and Tomoko wonders it if is Yū or Komiwhatsherface. She is surprised by a robotic Yū wishing her a good morning and noting that she has returned to black. Tomoko asks her if she is alright since she looks a bit "bleached." Yū insists that she is fine; she is just tired from all of the studying.

Tomoko reminds her they are just about to go to the study camp and asks her again if she is okay. Yū again insists that she is, and since she wants to go to the same college as Tomoko, it is fine. 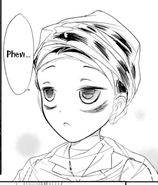 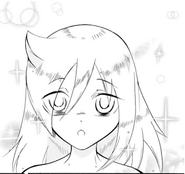 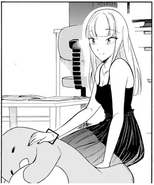