Mrs. Kuroki drops off Tomoko, Yū, and Kotomi while wishing them well. Yū thanks her. Tomoko notices a group of girls including Itō standing near a Lotte Marines display and announces that that appears to be the gathering place. Along with Itō, Yuri stands nervously, Fūka stands with Miho Narita, and Kaho, and Miyazaki stands with Kayo. Kayo remarks that Uchi says she will be there soon while Miyazaki responds while looking at her phone that "Nagi" will take a little while longer. Sweating, Fūka seems surprised that Tomoko is there.

Tomoko asks Yuri if, by her absence, Mako is not coming. Yuri removes her ear pice, seems happy to recognize Tomoko, then confirms that Mako will not be there. Kotomi greats Itō while a smiling blank-eyed Yū does as well. Itō asks her if she is okay, and Yū robotically responds that she is. Inwardly, Itō fears Yū is done for. Yuri approaches Yū and asks if "Naurse-san" is also taking part. Yū merely responds that it has been a long time.

From behind, Uchi arrives, sees the back of Yū, and recognizes her from before as the "Generic Me (ジェネリック私・jenerikku watashi)!" At that point, Nagi, who is revealed to be the Girl with Glasses, and Asuka arrive. The organizer for the Meikō Academy orders everyone to line up for roll call. She instructs the students to board a bus after their names have been called.

On the bus, Yū sits with Asuka who compliments her on how hard she worked the day before. Smiling, Yū robotically agrees that she did. Behind them, Yuri and Tomoko sit, with Nagi and Uchi sitting behind them. Tomoko pleasantly remarks to Yuri that it reminds her of their field trip only to realize the packed schedule of classes does not at all resemble their field trip itinerary. To herself, Tomoko muses that she is, in a way, looking forward to it, then thinks that if this were a manga this would be a way for her to power-up. Meanwhile, Uchi stares at the back of Tomoko's seat.

After their arrival, an announcement instructs them to assemble in the 2nd floor reception for the opening ceremony after they drop off their things in their rooms.

Tomoko learns that Yū is assigned to Room 701 while both Asuka and Yuri have Room 810. Asuka seems pleased. For her part, Uchi inwardly laments that she also has Room 810. Tomoko goes off to her room, noting for a moment that Itō and Kotomi share the room next to her. She places her card in the door slot, opens the door, and discovers that she will room with Fūka and Miho.

Miho chirps her greeting that she recalls her from studying with them a few days before, "the boob-lover (おっぱい好きの・oppai suki no)," then quickly corrects herself to say "Kuroki-chan." Fūka inwardly rages that Miho is wrong since it is "Kuroki the Breast-AND-Hair-Lover (胸と毛好きの黒木だ・mune to ke suki no Kuroki da)!" Tomoko offers a mechanically polite greeting. Miho suggests that they can choose beds by playing Janken, but Fūka replies that they can wait until after the opening ceremony. Tomoko notices to herself that she can almost see Miho's panties under the shirt she is wearing by the way she crosses her legs. Smiling, Miho lifts her shirt to reveal she is wearing shorts: "Too bad. I'm wearing shorts."

Shocked and embarrassed, Tomoko stammers that she knew that. Miho giggles that that is totally how a boy would react and "Kuroki-chan" is "so funny." Inwardly, Tomoko gripes that she only wanted to look at her panties, so Miho should not give her a nickname like a "disgraced celebrity." For her part, Fūka fumes that Tomoko does not seem satisfied with Asuka and is now hitting on Miho. Inwardly, Tomoko is satisfied that at least they do not make jokes about her being "gross" as she pictures Uchi.

The three leave the room together with Miho bright and smiling but Tomoko and Fūka appearing subdued. In the hallway, Asuka surprises Fūka and stares at her intently. Uchi stares at Tomoko and laments "why?" while Miyazaki asks "Uchi?" In her mind, Tomoko imagines a semi-chibi depiction of all the girls in their rooms. She concludes that students from the same school were grouped together. She recalls as they enter the crowded assembly that the bus made many stops and wonders just how many students there are. Sitting next to the still smiling and affected Yū, Tomoko guesses that there are between 200 and 300 all-girl students. The orientation explains that the students have been divided into classes based on their proficiency tests and college choices.

Tomoko finds herself again sitting next to the perpetually smiling and affected Yū in a class with Miho and Fūka. The teacher explains that they their "C-Class" will concentrate on raising their basic knowledge. Tomoko is stunned that she is the same level as Yū. For her part, Yū robotically realizes that she is in the same class as Tomoko, then transforms back to normal as she excitedly repeats that she is "together with Mokocchi!" The teacher continues to explain that those who perform well on the practical test at the end of the second day will advance to the "B-Class." Yū inwardly vows to do her best while Tomoko acidly concludes that the promotion systems comes straight out of a shōnen sports manga.

She vows to concentrate, for now, on gaining entrance to "B" where "Yuri and Emoji" are. She stares at the back of Fūka's head and muses that she looks smart but is also in the "C-Class": "maybe her brain is as loose as her lower body." Sweating, Fūka admits to herself that she has been struggling with her studies recently and ended up in the "C-Class" despite the fact that Asuka is in "A." She looks back towards Tomoko and concludes that this has to be her fault as well. She does feel she is lucky to be in her room since she can probe her on all sorts of things during the camp.

The teacher explodes into grammar drills while a chibi Tomoko finds him over-dramatic and a chibi Yū watches with intense happy concentration.

During the break, Nagi, Kayo, and Miyazaki are happy to find that there are drinks as well as chocolate and candy. Tomoko sits next to Yuri while another girl stands in front of them obscured by Tomoko's "speech bubble." Tomoko asks Yuri how her class went; Yuri deems her teacher was "annoying." Yuri then observes that Tomko is in the class below her, but Tomoko sheepishly vows that she will probably move up after the test on the second day. The other girl turns out to be Uchi who tells Tomoko that she will be waiting for her in "B." Tomoko agrees while sweating and noting to herself that it is not really a big deal.

The smiling robotic-but-now-with-big-pupils-Yū happily tells Asuka that she thinks she can do her best for just a little longer. Asuka suggests that she can then give Yū a little more homework. Miho approaches her with Fūka and notes that she knows Asuka. Yū first starts to explain that they know one another through "Moko" then shifts to "Kuroki-san." Surrounded by anime flowers, Asuka bubbles that they helped Tomoko dye her hair.

Fūka, however, stares at Yū's Front Court and concludes that this is the girl who lets Tomoko touch her "boobs (おっぱい・oppai)." As she continues to stare intently, to Yū's nervous notice, she wonders if she should also probe Yū for details.

Meanwhile, in "Natural Literature B," Kaho, Kotomi, and Itō sit together. Kotomi thinks that since they have self-study from 8, she will have to watch the baseball game over the wifi, while Itō looks at her and inwardly guesses that she will still watch the Lottes during the study camp.

Yuri sits next to Nagi who sits next to Kayo. Miyazaki and Uchi sit in front of them. Yuri inwardly laments that there is no Mako, Yoshida, or Tomoko, though she can do without Nemoto! She wonders if she should have just studied at home. Nagi whispers to her the suggestion that instead of using the baths in their rooms they should go to the hot springs.

Asuka sits in "Private Liberal Arts (1) - A." She has a note she has drawn an "X" through that lists "Kuroki-san Study Plan" with English, "twenty a day," "Pass Exam Questions," Repeat," and "Review." She is upset that Tomoko would be in "C-Class." While Asuka deems her "a bit capable," she fears that she has less of a sense of danger than Yū and might be in trouble.

The narration concludes that the first night of the study camp continues. 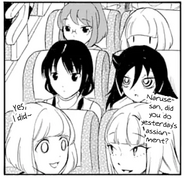 Not Shown A Disturbing Relationship . . . probably 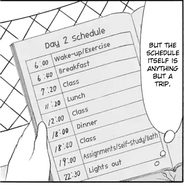 A Girl has a Name!