The chapter opens outside of the cafeteria on the first night of the summer camp. Tomoko sits with Yuri observing their dinner. It includes a small pot for cooking, and Tomoko complains about how on trips they always provide these small pots. Yuri explains that they are provided to keep food prepared in advance hot.

Behind them sits Uchi at another table with Miyazaki, Nagi, and Kayo. Tomoko reminds Yuri that they will have free study time, and she asks if she wants to go to the hot spring. While Yuri starts to respond that "earlier," Uchi imagines a scene WataMote Wiki will labor to describe: She sits in a hot spring titled "Kuroki's Bath (くろきの湯・Kuroki no yu)" with Tomoko. A sign encourages, "Drink the Gross! Relax in the Gross! Effective in recovering your fatigue and keeping your body healthy!" Tomoko sits blushing from the heat in front of Uchi. Uchi sits to the right and slightly behind Tomoko with a sign reading "hot spring" behind her. She appears to be scooping up water to drink, and Tomoko does not appear to be aware of her. The water surrounding them contains a comic version of Tomoko's eyes with bags and her mouth.

Asuka, who also sits next to Tomoko, asks her if she can stop by her room after the next lesson. The scene reveals that they are sitting at a table with Fūka, Kaho, Kotomi, and Itō. Though Tomoko stammers a "y-yes . . . but,"  Asuka continues to tell her to wait in her room. Fūka thinks, "Asuka." The scene reveals that Fūka is also sitting next to Miho Narita. Fūka smiles and tells Asuka that she and Tomoko share the room and asks her if she should leave. Asuka calmly responds that it will not matter if she does.

In the evening class, Tomoko sits next to a sweating Yū. She muses that she feels weird studying with so many people in the evening. The teacher tells them that classes have ended for the day, but they are free to continue their studies in either the classrooms or in their own room. He encourages them to consult with their advisors if they have any questions then reminds them that this is not a break from their studying.

Back in their room, Miho lies on her bed looking up at her phone complaining how tired she is and how many Line messages she has. Tomoko sits on her bed and looks sadly at her phone as she notices that she does not have any. Fūka sits in a chair some distance away and stares at Tomoko. Smiling as she looks up at her phone, Miho declares that she wants some snacks and asks if they all want to go to the convenience store. Fūka replies that Asuka said she would be coming by. Miho responds with an "ah . . . I see," then asks Tomoko if she wants anything. Tomoko asks for an iced coffee. Miho then instructs Fūka to accompany her.

Alone, Tomoko sits on the bed. She thinks that Asuka is coming and wonders why she is restless. She decides to at least brush her teeth. She then sits and in shock feels that she is acting like she is ordering a "prostitute (デリヘル・deriheru)." While she realizes that she has no real idea about the subject, she feels "hotel," "Katō", "all alone together" and "evening" seem lewd and make her nervous.

Asuka arrives and politely asks if she may enter; Tomoko stammers and whispers her assent. Asuka asks about Fūka and Miho, and Tomoko explains that they have gone to the convenience store. Asuka asks her if she has her answer sheets for the proficiency tests. Tomoko responds that she does, and Asuka pleasantly inspects them. She happily declares that Tomoko is not that far behind Uchi and Yuri, and with a little more effort, Tomoko will make it into B-class. She then produces some questions to prepare Tomoko for the next day's test. Tomoko stammers a "thank you," but then adds that she will do them after her bath since she made plans with Yuri. Asuka tells her not to worry since she already told Yuri. In a flashback, Asuka pleasantly confronts Yuri and tells her that "this is to get Kuroki-san in the same class," so she can put off "playtime" for a night. Yuri looks away and sheepishly agrees. Tomoko inwardly rages at the "braggart (内弁慶・uchibenkei)" Asuka who had scolded her and Mako for being selfish. After calming down, Tomoko thinks that since Yuri does not have many people she can talk with, she had wanted to spend time with her during the free study period. However, Tomoko concludes that getting into the B-class is more important in the longterm.

The sceen shifts to Nagi and Yuri sitting and talking together in the hot spring. Nagi asks if Yuri means that she and Tomoko became friends during the school trip, and Yuri affirms it. Kayo and Miyazaki sit across from them. Kayo remarks that since Yuri and Tomoko are always together, she was sure she knew Tomoko for as long as she knew "Makocchi." Yuri confesses that she did not know Tomoko's name until the trip, and Miyazaki laughs. In a flashback where Minami laughs at the head of a group that includes a laughing Sachi, a blushing Mako, and a nonplussed Yuri in the background, Nagi admits that she and "Kaede," were with Yuri during the first year, but they were in separate groups and did not talk much. Yuri sheepishly agrees. Nagi continues that she use to be against talking with different groups since she felt it would be more fun to talk in the usual group. She then admits that similar to the way Uchi has been recently, she thinks it is more fun to act freely like Tomoko does. Yuri again sheepishly agrees. Happy, Nagi continues that why not they all take this opportunity to get along with Yuri: "Let's go naked in the sauna!" Kayo notes responds that the suana seems pretty packed at the moment while Yuri says nothing.

Back in Tomoko's room, Tomoko and Asuka sits at the table while Fūka sits at the desk. Miho lays on her bed looking at her phone as she enjoys a snack. Fūka apologizes to Asuka for asking her to help her with her test as well. Asuka brushes it off. When Miho asks if she can turn on the television, Asuka asks Tomoko if she would prefer to continue in her room. Sweating, Tomoko declines claiming that the noise helps her, but she thinks that she also wants to watch the television.

The door rings to everyone's surprise.

Fūka opens the door to find Uchi in a bathrobe with her hair still damp and her face curiously shining. Uchi asks if "Kuroki" is in.

Inside, they return to their places with Uchi sitting at the table between Asuka and Tomoko. Asuka pleasantly asks her what is up, and Uchi responds that she, too, has come to help Tomoko with her studies.

After Asuka leaves, Uchi inwardly celebrates that she has removed one nuisance. As Miho playfully kicks the back of Fūka's chair as she laughs at the program and Fūka demands she stop, Uchi notes that she only needs to get rid of them so she can have a repeat of that night.

The program announces a "personality quiz," and Miho eagerly demands that they all try it. The program continues with a picture of a door. It suggests that the door to the viewer's house has worn down and asks the viewer to write down how he would feel after rebuilding the door. Miho happily responds, "Normal!"; Uchi declares, "Disgusting accomplished!"; Fūka suggests that her hips are sore; while Tomoko admits that she really does not know how she will feel.

Tomoko, sweating a bit but smiling, turns to Uchi and reminds her that the two of them took the same sort of quiz together during the school trip. Uchi reacts in shock, and her face transforms in a way WataMote Wiki will not try to describe but will extend appropriate compliments to the Artist. "She remembers!" Uchi thinks in shock, deeming it "disgusting!" naturally. Tomoko wonders why Uchi is blushing and suspects it is because their quiz exposed her as a virgin then.

After her bath with the Emoji Gang, Yuri approaches the door to Tomoko's room but hears noises from within. She walks away and wonders if she heard Uchi's voice. As she sits alone in the room she shares, she muses that it has been a long time since she has talked to so many, certainly without either Tomoko or Mako around. She admits to herself that she has always had problems with groups of girls like the Emoji Group, but they were surprisingly easy to talk to. "Like Tomoko," she thinks as she looks out of the window.

A naked Asuka emerges from the bath behind her.

She quickly slams the door shut and apologizes and explains that she thought she was alone. Yuri replies that it is fine and apologizes for not letting her know she was there. Asuka states that she left her towel on the bed and asks Yuri if she can bring it over. As Yuri picks up the towel, something drops on the bed. She discovers that it is Asuka's underwear. Blushing, she holds it and wonders if she should bring it to Asuka as well. She then starts to laugh. She concludes that she is now a lot like Tomoko.

As she sits on the bed laughing as she gazes at Asuka's underwear, Asuka watches her from behind.

"You are Welcome." – WataMote Wiki 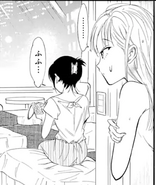 "You are again welcome." – WataMote Wiki An interesting scene. 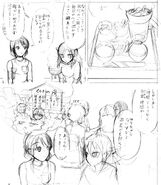