The cover depicts Tomoko, Miho, and Fūka in their beds. Tomoko sleeps to Fūka's right in her "chick" pajamas. Miho sleeps to her left embracing a body pillow whilst wearing cat blinders. Fūka lays awake with her arms folded. She looks over at the sleeping Tomoko. She inwardly complains that though she has watched Tomoko the entire day, aside from one strange look at Miho, Tomoko had not done anything suspicious. Still, she rationalizes, since Tomoko has her, Miho, and Asuka as objects of her libido, she cannot let down her guard. She reminds herself that there is still that subject of Asuka's "hair" that she needs to resolve, and she has four days to find the answer.

Tomoko arouses and seems surprised to see the ocean outside her window. She quickly remembers that she is at the Study Camp as she notices the now sleeping Fūka next to her. She then declares that she has to "pee (おしっこ・oshikko)." As she walks past the foot of Fūka's bed, her leg seems to pull over Fūka's covers. She gets a quick view of Fūka in her colored shorts as well as Miho. Fūka mutters a bit.


Tomoko sits upon the Throne of Contemplation as she plays with her phone. Without a word, Fūka opens the door to the bathroom. As Miho slumbers with a mutter, there are the screams of Tomoko and Fūka with Fūka apologizing and declaring that it was not on purpose.

The scene shifts to the cafeteria. Tomoko looks over the choices as she chooses her breakfast happily noting that they include grilled fish, miso soup, seaweed, natto, weiners, bacon, and even potatoes. She observes two anonymously drawn girls happily choosing and inwardly complains that girls who just grab everything are "major amateurs (ど素人・doshirōhito)."

She spies Asuka and notices that her tray contains what a model would eat: vegetable juice, a boiled egg, fruit, cereal, and yoghurt. She then notices Fūka's tray and concludes that she has the appetite of a gorilla: milk, curry, two boiled eggs, "mountains" of weiners, potato, and salad, two bananas, and two rolls of bread.

Yuri approaches her from behind and asks her where they should sit. Tomoko quickly surveys Yuri's tray and asks her if that is all she is getting: porridge, pickled plums, and a banana. She adds that it is the type of meal "Baki the Grappler" would have before a match. Yuri protests that she does not eat a lot in the morning. The two sit with Kotomi and Yū. Tomoko asks her watch she did "alone" the day before. Yuri replies that she was not alone to Tomoko's surprise. In the next table behind them, Nagi sits with Uchi. Nagi interjects that the "four of us" went to the hot springs. Bathed in animesque flowers and light, Nagi suggests that Tomoko should join them sometime.

As she eats, Tomoko muses that she thought without the "Crazy Lesbo" Yuri would have been bored but she seems to have been fine. She then asks Yū what she did. Yū replies that she went to the baths with Kotomi and others. In more anime flowers, she happily admits that she got a bit "dizzy." She rhetorically asks Kotomi if she agrees that it was amazing. Kotomi agrees but discourses on how she thought the Chiba Lottes were going to lose when they ended up winning only to confess she is not sure. Tomoko wonders if saunas are a legal form of getting high. Sitting at a table behind Yū and Kotomi, Itō listens in on their conversation.

Meanwhile, Fūka pauses with her chopsticks in her mouth staring down. A smiling Miho regards her then teases: "what? Already tired? On just the second day?" Fūka replies that it is "not that" as Asuka and Kaho eat from across the table. Fūka tries to explain that she has this feeling that she saw something "weird" that morning. Miho teasingly asks if it was weirder than her peeping at "Kuro-chan" when she was on the toilet!

Fūka protests that that is not what happened; she merely walked in on Tomoko while half asleep. Uchi stands and explodes, "You watched Kuroki shit?!! You're the worst!" Tomoko startles in shock as the smiling Asuka quietly advises: "Fūka. . ." Tomoko screams that she was not doing that, and a standing Fūka confirms and declares that Uchi has it all wrong. She appears searching for something, and her salad sparkles. She picks up the bowl, pokes at the contents with a spoon, as she replies that she did see something.

Tomoko protests the ideas that Fūka may get from looking at her curry and insists that she was only playing with her phone. As they go back and forth, Asuka quietly smiles. Fūka insists that it is not the curry, but something in her salad reminds her of something she is trying to remember, and she demands that Tomoko be quiet.

Bathed in animesque flowers and light, Asuka finally speaks to calmly advise Fūka that while she knows that Fūka likes to discuss such matters, she must kindly refrain while they are eating. Fūka collapses in defeat cursing then inwardly laments that she was so close to remembering. Meanwhile, Uchi thinks, "she didn't see shit?"

In class at 7:30 A.M., Tomoko inwardly deems that starting study at 7:00 A.M. is earlier than in her school. At 10:00 A.M. in their class, Uchi helps Kayo understand a point. Sitting next to her, Yuri thinks that Uchi is smarter than she appears. By 12:40 P.M., Itō laments being sleepy while observing that Kotomi, sitting next to her, also did not get much sleep but does not seem sleepy. For her part, Kotomi inwardly wonders about the bento served for lunch.

During break, Asuka sits next to Yū who smiles with animesque steam billowing from her head. Next to her, Yuri sits with Tomoko who stares upward. The "peeping chicks" appear, and Tomoko declares that she has studied so much she is becoming stupid. Yuri reminds her that there will be a proficiency test at the end of the day, and she asks if Tomoko will be alright. Tomoko confesses that she is not sure, to which Yuri replies that there was little point for the two of them to attend if they were not going to be in the same class. Tomoko assures her that she should be fine if she performs normally, then remarks that Yuri really is lonely. Yuri denies this. Next to them, Asuka has applied a compress to Yū's forehead. She applies one on Tomoko assuring her that it will help wake her up. Meanwhile, Fūka stands some distance away regarding Tomoko sternly as Miho pleasantly chats with Nagi.

In her class, Fūka's lesson transforms in her mind. It is a lesson on English grammar, but the teacher appears, in Fūka's mind, to teach what she is thinking: "overlook something." The teaching continues to say "dye my hair silver." Fūka fixes on this point. She writes down the phrase. She then suddenly realizes as she recalls Tomoko sitting on the Throne of Contemplation as she plays with her phone with her legs spread: "SILVER?!!" With concern, Miho notices Fūka spacing out. Fūka inwardly remembers that Tomoko's hair was silver "down there (あそこ・asoko)." She then recalls Asuka and Yū the day before discussing dying Tomoko's hair.

She then imagines Tomoko sitting with her legs spread as the happy duo of Asuka and Yū attend to her and concludes that they meant Tomoko's hair "down there." She then recalls the laughing Asuka and concludes she meant that Tomoko wanted to touch her hair "down there." She stares intently while the smiling Miho waves her hand in front of her face. She begins to think that something was wrong that morning as she wonders what type of girl would not lock the door to her bathroom. Was she waiting for either she or Miho to find her? She fears that while she intended to probe Tomoko, perhaps she has been dancing in her palm!

The following day depicts lists for the new classes with the panel centered on class "B." In a classroom, Yuri sits next to Tomoko who sits next to a smiling Asuka and a beaming Miho. Behind Yuri sits Miyazaki, then a smiling Uchi, then Nagi, and finally Kayo. Miho teases Asuka about dropping a class level. Asuka replies that it is fine since the class consists of people who have ambitions greater than she. She describes them as very knowledgeable. As Tomoko looks on, Asuka continues that it would be lonely if she were all by herself when all of them came together to study.

Tomoko pleasantly notes to Yuri that she must have also been lonely, but Yuri denies that she was. Behind her, Miyazaki cheerfully adds a "good for you," and Yuri replies with a smile and "yes." Tomoko asks her if something is different, but when Yuri asks her why, Tomoko retreats and says it is fine.

Asuka notes that Fūka did not make it to the class. Miho responds that while Fūka is good at studying, she is a "natural airhead (天然・tennen)."

Meanwhile, Fūka sits next to a "bleached" and smiling Yū, who is muttering "Mokocchi," in the "C" group. She stares at Yū intently as she thinks she has finally solved the "riddle" of the "hair," but the mystery surrounding Tomoko has only gotten bigger.

She feels sure that "this girl" must be her key to solving it. 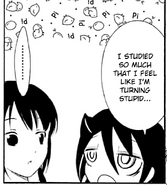 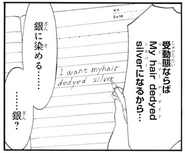