The cover depicts Tomoko Kuroki sleepily sitting on her bed starting to undo her peeping chick pajamas. The next panel depicts a view of the sea with the additional title "Sequel (後編・kōhen)." Dressed in shorts and a sweater, Tomoko leaves her room while Fūka and Miho still sleep. Wearing a flowered dress, a calmly smiling Asuka watches two anonymously depicted girls pleasantly chat as they pass her as she sits waiting in the lobby. Tomoko approaches her and greets her. Asuka returns her greeting and suggests they take a short walk outside.

As they walk along the beach, Asuka laments that though it is a beachside hotel, they can only visit it during the morning and nights. Tomoko remarks that it will be the first time she has seen the sunrise over the Chiba Sea. Asuka pleasantly replies that then it is good. As Tomoko observes Asuka brush away her hair in the sunshine, she thinks, "Study Camp. Sea. Early morning walk with a beautiful girl," and concludes that it is as if her youth has returned to her third-year summer break. Asuka slyly turns and asks "what?" which causes Tomoko to nervously stammer that it is "nothing." They both take a moment to look into the sunlight, then Asuka quietly calls out "Tomoko-san." Tomoko turns and Asuka crosses her hair under her nose as she exclaims, "moustache!" Stunned, Tomoko laughs. They turn back to watch the sunrise, but Asuka looks down with a degree of sadness. Initially shocked, Tomoko inwardly wonders why there is this change in tension, then sweating, she wonders why Asuka would make a boring joke like an "idol" would only to become quiet. She suspects that even "Mama" is tired from Study Camp.

Miho, Fūka, and Yū observe the two from behind. Miho exclaims that Asuka did the joke "Naru-chan" taught her the day before, but it appeares it failed.

The scene shifts to the night before outside Room 811. From inside, the voice of Miho expresses surprise at the suggestion that she and "Kuro-chan" are "close (仲良い・nakaii)." Inside, Miho sits on her bed while Asuka sits at a desk. Miho replies that Asuka is closer to "Kuro-chan." After all, she explains, Asuka was the one who told Tomoko about the Study Camp. Asuka insists that today Miho seemed closer. She then turns towards Yū, who sits across from her, and Fūka, who sits at a desk behind Yū, and remarks that Fūka is also closer, then corrects an answer by "Naruse-san." Fūka expresses surprise at Asuka's claim, but Asuka continues that it appears that the two have become closer to Tomoko over the Study Camp.

Miho asks Asuka what has caused her to raise the subject. Asuka confesses that she would like to play around with "Kuroki-san" the way Miho and Fūka do. Miho smiles and suggests that she did not think Asuka liked doing silly things; Asuka quietly replies that she does not think that. Miho agrees that Asuka did play an interesting "gag" (ギャグ・gyagu) when she offered to let Tomoko fondle her during a study session.

Asuka calmly insists that it was not a "gag."

"Not a gag, huh?" Miho rhetorically replies. She then asks Asuka if Tomoko "actually touched them." Asuka responds that she did not. Still bubbly, Miho suggests that perhaps Tomoko got scared because Asuka was serious and not joking. As Fūka watches, Miho suggests that Asuka is an "airhead" like Fūka, but she does not have weak spots. She wonders how to put it, then continues that Asuka has great looks like Fūka, but inside she does not have "worthless" (ダメダメ・damedame) points. Yū gently introjects that she thinks the same way to Asuka's surprise. Yū explains that today she and "Fūka-chan" talked, and she thought that Fūka is somehow "worthless." She corrects herself that Fūka is not "completely worthless," but "worthless" in a "good way" which may explain why Tomoko finds it easier to talk to her. As Asuka listens, Yū suggests that if she would show "Mokocchi" her "worthless" and "embarrassing" sides, Tomoko might show her more natural side as well.

Asuka smiles in a fashion that sends chills up the spine of WataMote Wiki as she replies, "I see . . . alright."

She then pleasantly asks Fūka to teach her how to be a "worthless human being." Inwardly, Fūka glowers as she wonders how she became the model (見本) of worthless human beings, then she explodes. She declares that both Asuka and Yū are not just "worthless people" they are "weird people (変な人間・henna ningen)," and accuses them of dyeing Tomoko's pubic hair silver. As Asuka calmly asks her what she is talking about, and a sweating Yū denies it, Miho bubblingly suggests that that is what Fūka is like.

Asuka happily concludes that she just has to lower herself to that level, and she promises to give it a serious try. Miho bubbles that to help it go well for Asuka, the two "C-Class" girls have to give her material. Sweating Yū reacts in surprise as Fūka acidly replies, "even if you say that!"

The scene shifts to the present with Asuka standing standing next to Tomoko as they watch the sun rise over the sea. Asuka moves closer to Tomoko which Tomoko notices. Back in the past, Fūka reminds Asuka that she tried to get Tomoko to touch her breasts. As Asuka returns to the present, she recalls Fūka suggesting that if she tries to grab Tomoko's breasts, that might do something. Thinking that it might be better to get closer, Asuka reaches under Tomoko's arms and gives Tomoko a squeeze with both hands. Tomoko screams in shock, and her head flies back to strike Asuka's nose.

Despite the animesque sparkles, Asuka has a nosebleed. Shocked, Tomoko stammers apologies while Asuka assures her that she is fine and thinks the bleeding will stop soon. Still stammering, Tomoko searches for a tissue, but can find none, then looks for a handkerchief, but Asuka announces that she has her own. Tomoko's eyes swirl in spirals. As a chibi Asuka applies the handkerchief to her nose, she asks if she can request something until her nose stops bleeding. Asuka lies on the beach with her head in Tomoko's lap. As she holds Asuka's head, which is bathed in animesque light, Tomoko inwardly feels shocked that "Katō-san's" head and hair are making direct contact with her thighs. Her legs and hands start to shake as she inwardly declares that it is good that she is not a guy.

Asuka tells "Koroki-san" that her "pillow is a little high." Tomoko replies that the position of her pillow or the position of her "penis (マラ・mara) is a little, heh" only to inwardly scream at herself for being a moron. She caresses Asuka's hair, then stammers an apology, but Asuka asks her to continue since it relieves her when Tomoko strokes. "Speaking of that," Asuka continues, "Kuroki-san wanted to touch my hair, right," but they did not have time due to Tomoko's suspension. Blushing, Tomoko questions that today "Katō-san" seems different. Asuka agrees. She smiles as she removes her handkerchief and explains that since they are at the Study Camp, she wanted to try things she normally would not do. She then apologizes for surprising Tomoko, who politely declines it.

Chibi Asuka happily declares that the bleeding has stopped, and she thanks Tomoko. Blushing chibi Tomoko asks her if she can stay a bit longer. This surprises Asuka, while Tomoko inwardly confesses that it is because she has not touched enough. Asuka suggests that Tomoko is like a "Big Sister (お姉ちゃん・onēchan)." Tomoko denies that she is, but Asuka insists that it is okay for Tomoko to spoil her.

She asks Tomoko to call her "Asuka."

This surprises Tomoko, but Asuka explains that in her home she is the little sister, so she has the opposite character of Tomoko. She asks Tomoko to try it to see if it works for her. Tomoko stammers "A . . . Asuka-sa, . ." but Asuka asks her not to use "san." Tomoko complies, and Asuka finds it good. She then asks what she should call her, "Big Sister?" Tomoko stammers a "no," since it may sound a bit like "play," as in kinky play. Asuka laughs at this. Asuka suggests that "Kuro-chan" is not good and suggests "Tomo-chan." Tomoko stammers that that might work. Laughing, Asuka says "Tomo-chan" and a blushing Tomoko stammers "Asuka."

Behind them, Fūka, Miho, and Yū continue to watch. Fūka asks if things went well due to her idea; Miho responds that she wonders about it. Kaho approaches from behind with Itō and Kotomi following her, and she asks Miho what is happening. "A little bit, heh," Miho responds with a smile as Kaho looks shocked. Asuka turns from Tomoko to greet "Naruse-san," then "Komi-chan," and "Hikari-chan."

A worried Uchi runs up to ask Asuka what she was doing since she was not in her room. Yuri follows Uchi, and behind her Miyazaki, Kayo, and Nagi stand with Kayo noting "it's the sea." Asuka merely wishes Uchi a good morning, then apologizes for not warning her. She asks Uchi if she was worried; Uchi denies it.

All of the "WataGirls" stand looking out at the sea. Asuka suggests that they head back, but Miho responds that they should all shout out to the sea. Fūka asks why, and Miho shouts "YOUTH (青春・seishun)!" She then declares that whoever loses at janken will be their representative and they will follow. As a chibi Kotomi and Yuri watch, Miho declares they start.

As Kotomi screams "LOTTES CHAMPIONS!" Yuri blushes and remarks "do our best" to the notice of Asuka, Tomoko, and Nagi. Chibi Miho screams "LOTTES CHAMPIONS," and Fūka, Itō, and Kayo sheepishly repeat the phrase. Nagi and Asuka, however, repeat Yuri's cheer. Tomoko teases "Yuri-chan" over her cheer and how no one heard it over Kotomi's, which is why she lost. Yuri replies by hitting Tomoko on her head. Uchi inwardly laments that it is their final day, yet she has not made any memories with Tomoko.

"You are Welcome!" – WataMote Wiki

Not Shown: A "cunning plan" succeeding. 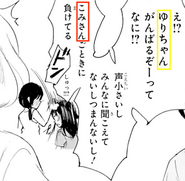 Retrieved from "https://watamote.fandom.com/wiki/WataMote_Chapter_175-2?oldid=21636"
Community content is available under CC-BY-SA unless otherwise noted.