As the higurashi cry, the television plays in Tomoko's room and announces that the station conducted a survey of one thousand middle and high school students regarding their choices of a career. There is a view of a calendar with August ("8") showing. Dates 3 through 7 are crossed out with "Preparatory School Training Camp" written over the dates. 10 through 11 has "Nemo" written over them. Tomoko sits at her desk studying as the program continues. The announcer explains over a graphic that the highest ranked career was content creators for video sharing sites such as "YouTubers." Among middle school boys, YouTuber ranks the highest, followed by "eSports player," "game creator," "programer," and "civil servant." The announcer wonders why they would want to become "YouTubers," then muses "overseas. . . ." Tomoko looks back at the television and thinks in response that she also would like to grow up and be a "YouTuber." She muses that if she could make a living off of streaming video games she would not have to study. Still, she continues, even if she did livestream, she doubts that she could get many views, and even if she could, keeping them high would be another matter.

She stares out the window as the higurashi cry, then looks at her phone as she thinks she can take a little break as she looks up "how to stream games." She finds the instructions easy and no wonder that so many want to become players. She chooses a role-playing game (RPG), but when she starts recording she becomes self-concious, blushing with swirling eyes and surrounded by the "peeping chicks," as she whispers and stammers her introduction to her first live-stream.

For a while, she plays silently, then stammers a whisper about the appearane of a "zombie (ゾンビ)" and her plan to simply avoid it. She plays in silence further, but then startles in enthusiastic surprise at something that scared her. She likens it to a classmate one does not really know suddenly calling out to one in the street. Tomoki's feet appear at her door behind her, and he asks her what she is doing by herself. Shocked, Tomoko turns to him and demands that he not enter unexpectedly, then denounces him as a "huge pervert female specialized harem abnormal striker (ド変態女性専門ハーレム異常性癖ストライカが・dohentai josei senmon hāremu ijō seiheki sutoraika ga)!"

Tomoko replays her recording. To her embarrassment and horror, she finds herself boring. The only part she finds interesting is when she yells at her brother. Looking at her controller, she realizes why people deem it a "dream job (夢の職業・yume no shokugyō)," and she concludes that if she uploaded it, it would receive double-digit views at most. Dejected with her stuffed toys behind her, she rationalizes that outside of comedians and popular people, live-streaming games are done by guys. She is not aware of any girls live-streaming games. She returns to her computer thinking that she is unaware of any female live-streaming gamers. She finds a few, including one girl with "huge . . . tracts of land" that fall on her controller as she plays an "XXX" game! Tomoko declares that girl gamer videos do not need high technology or laughs. She deems herself out of their league, but she laments that she still likes games.

She happens upon "Shiki Channel," which advertises a new song with "super hard strategy." She has 210K views. The video shows the back of a very familiar character standing before a dancing game. Staring, Tomoko recognizes that the girl is wearing her school's uniform, and she feels that she recognizes "this backside (この後ろ姿・kono ushirosugata)."

She checks Shiki's channel – whose avatar is her emoji! – and discovers that Shiki started it on July 22 – "since Summer Break" – and she know has 52K subscribers. Tomoko explores her channel which has views of her legs as well as her normal lower face. She muses that she has a lot of crafty videos despite having a face like Danbō. Looking at Shiki's earlier videos, Tomoko notes that they are simple gameplay with thumbnails that are just scenes from the game. As Tomoko focuses on a picture of Shiki with her legs in view, she realizes that Shiki discovered that simple gameplay did not generate views, so she added "lewd" elements. Her views increased ten-fold once she added her "lewd" elements.

Tomoko then imagines Shiki and Uchi together with the title "Emoji Tribe (絵文字一族・emoji ichizoku)." She wonders if it is a special trait of the "Emoji Tribe," since both seem to have great style. She then focuses on the a view of Shiki's lower face smiling as she holds a controller. Tomoko concludes that the "lewd" videos allow the viewer to imagine the rest of Shiki's face as "beautiful" as she conjures a vision of a big-eyes anime/manga Shiki.

She listens to Shiki introduce herself in a later video. She observes that in the those recent uploads Shiki has made the effort to communicate without the "lewd" elements. Despite looking like Shiki does not think of anything as Tomoko imagines her emoji face, Tomoko concedes that Shiki has come far. She has uploaded ten videos during the Summer Break, which means she must really want to work in games.

Tomoko stares out her window and thinks she should study.

As the higurashi again cry, Tomoko figures it will be a good breather from her exams, so she will subscribe to Shiki's channel

"You are welcome!" – WataMote Wiki 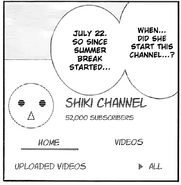 "Who would choose an emoji as an avatar?!" – WataMote Wiki 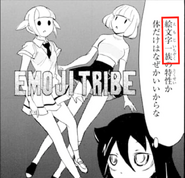 Emoji Tribe Tomoko thinks the Japanese in the rectangle while imagining the title in English.
Add a photo to this gallery

Retrieved from "https://watamote.fandom.com/wiki/WataMote_Chapter_176?oldid=22197"
Community content is available under CC-BY-SA unless otherwise noted.