This chapter is a second part divided into titled sections.

The cover page is expanded from the previous: Tomoko still walks with Fūka following a few paces behind her. Reina still walks in a different direction holding a soda can, and Miyazaki still looks concerned as she pauses looking at her phone and follows Tomoko with her eyes through the hallway window. Now Asuka and Kaho chat inside behind Miyazaki. Yuri walks past them further away from the window. A smiling Miho, happily rushes towards Asuka and Kaho. Just outside the window leaning against the wall Emiri looks up. Minami stands between Tomoko and Fūka. Behind her and next to Fūka, Akane walks with Hina. Behind Fūka, Shizuku sits on a bench. Further away from Reina, Sachi walks. Itō sits on the bench that surrounds the tree, and Yoshinori approaches from behind Akane and Hina.

The narration reads, "After Summer Vacation, I feel something changed."

As Tomoko sits next to Asuka in their class room, Asuka greets her with, "Good morning, Tomo-chan."

A chibi Tomoko blushes, then the actual Tomoko deeply blushes, sweats, then starts stammering "Atsu . . ." and "Asu . . ." Chibi Asuka giggles while Frustrated Chibi Tomoko curses about behaving just like No Face. The scene shifts to Wada sitting in front of Tomoko chatting with Yoshinori and Akane. They hear Tomoko stammering and Asuka gently reply, "until you say it, I'll wait." Akane and Yoshinori both sweat as they look towards Tomoko and Asuka "off screen" and think, "what are they doing?"

Wada, to Akane and Yoshinori's shock, calmly turns toward Tomoko and Asuka and asks them directly what they are doing, to their surprise.

With animesque bubbles, Hina sits next to Yuri.

She happily greets "Tamura-san" with the traditional "long time no see," and suggests that she has wanted to see her. Nonplussed, Yuri stares ahead and replies that she did not want to see Hina. Hina laughs. She continues her smile for a beat, but then begins to blush and sweat as she thinks, "just now I think . . . conversation with Tamura-san is like an anime?!" She turns away from her, looks down, and nervously thinks that she has never had a reaction from a girl like this, and it may be a bit fun. Yuri silently watches her.

However, she is somewhat surprised by Hina's reaction. She notices Hina visibly shaking as she looks ahead and slightly down with an artificial smile transfixed on her face. A chibi Yuri wonders about how Nemoto can look like that after she has insulted her. She muses that while she does not hate Hina, she is not good at dealing with her.

Miho stretches her arms as she chats with Asuka and Kaho. She overhears around the corner someone exclaiming, "Sasaki-san, right? No way!" She looks around the corner of the corridor to see Nori talking with two anonymously drawn boys. One boy explains that he actually heard it on the train, and she was talking "like a slut" (ヤリマン・yariman), with the "リ" censored in the Japanese Original™. The other boy muses that it would be great if she looked like a "bitch" (ビッチ・bicchi), and he wishes he knew her a year earlier. Nori teases that even so, she would only do it with good-looking guys, so they are out of luck. One of them teases back, "shut up!"

Miho moves back towards Asuka and Kaho and remarks that they are having a really stupid conversation.

Asuka looks sad, and Kaho asks her if she is all right as Fūka and Experienced Friend approach from down the hallway. Asuka begins to lament that she does not know who is saying it, but hearing people talk about Fūka when she is a little stupid. . . . Meanwhile, with the chicks "Pi"'ing in the background, a sweaty Fūka asks if it is "bitter," then says what the girl revealed is "good."

As they come upon Asuka, Miho, and Kaho, Fūka asks her to remind her of the dirtier way to say, "deep kissing (ディープキス・deippu kisu)," and her friend responds with ベロチュー (berochū), which can mean "French Kissing" and, literally, "tongue kissing," which Fanilators render as "tonguing." Fūka excitedly exclaims that she will call it that until she startles as she sees the trio of Kaho, Asuka, and Miho. She happily greets them with, "Asuka, Miho, Kaho, what are you talking about?!"

"Yep," Miho observes, "this one's a real moron," as an embarrassed Fūka gasps in realization and a dark animesque cloud hovers over Asuka's head.

A sheepish Shizuku sits on the bench with Tomoko. She says she missed Senpai and asks her what she did during the summer. Tomoko responds that she just studied for exams. She then says that she wants to ask Shizuka something. She notes that she has a boyfriend, and Shizuku confirms that she does.

Tomoko seriously asks her how her first time was like, to Shizuku's shock. She blushes, repeats "Eh?" and "First Experience?" then asks Tomoko if she means what she thinks she means. Tomoko explains that a lot of things have happened, and she wants a more realistic "sexual knowledge (性知識・seichishiki)."

Shizuku looks away and blushingly admits that she has not "yet" to Tomoko's surprise. She asks her that if one has a boyfriend, is it not natural to do it. Shizuku admits that others may do that, but she looks down and blushes in anime light that she is a little scared. Tomoko looks at her with shock and suggests that her boyfriend must be patient. "If I were him, I'd rape you in seconds."

Shizuku brightens a bit as she startles and asks her if that is true. As a Happier Chibi, Shizuku admits that in such times there are ways to calm things down. When Tomoko repeats "how to calm down," Shizuku starts to explain.

Fūka walks into a classroom bathed in sunlight as she confronts Tomoko who is with Shizuku. On the desk in front of them is a beer can . . . probably. Fūka hautily asks Tomoko why she summoned her. Tomoko presents the . . . beer can . . . on the tray before her and responds that she is thinking of continuing their morning's conversation. Fūka proudly retorts that she forgot to mention something that morning on the train: does Kuroki know that semen (精液・seieki) beer tastes bitter?

Tomoko sweats as she turns to Shizuku and mutters, "is that so," as she thinks that she has heard that. A blushing Shizuku insists that she does not know. Satisfied, Fūka crosses her arms and replies, "So . . . Kuroki doesn't know about this level of stuff we're talking about!" Inwardly, Tomoko screams the proper "Bitch (こいつ・koitsu)!" Stammering, whispering, sweating, with blood vessels pulsing, Tomoko retorts, "Well, gori . . . that Sasaki-san only has that kind of knowledge I understand. Only that knowledge." Pushing the tray with the . . . beer can . . . forward, Tomoko continues to ask about the practical matters. She has a clay model of male genitalia (粘土で男性器・nendo de danseiki) beer can, and Sasaki should have no problem demonstrating how to jerk it off (シゴク・shigoku) open it.

Fūka belittles Tomoko's "game" she wants to play and pities her for her unpopularity; however, inwardly, she realizes, "This is bad. . . !! What's 'シゴク?'"

Fūka experiences a montage of her doing pushups and running track as a coach encourages her. She recalls that during middle school she was often "jerked (しごか)," and was this what it meant? Was it a sexual thing? Her coach was male, after all! She leans over the . . . beer can . . . puts her hands on either side of the tray, and thinks, "which means . . . I do it like this!" She pounds the table and proclaims: "Do your best! Don't lose! GO!"

Tomoko and Shizuku stare at her in silence.

Fūka tries to recall her chibi friend, and thinks she thought "it" was some sort of verbal abuse, but perhaps she is wrong! She says that she was just trying to motivate herself, as a chibi Tomoko merely responds with "oh . . . oh oh." Sweating, Shizuku tells Fūka that, "um . . . you use your hands . . . there. . . ." to her shock. With the return of the "Pi"ing Chicks, Chibi Tomoko asks if she did not even know that. Sweating Chibi Fūka tries to pass it off with the claim that she was just playing with her a bit.

Fūka stares at the . . . um . . . "beer can" with a look WataMote Wiki cannot adequately describe. Her hands approach as she thinks, "so that's it! Use the hands . . . somehow I understand that. . . ." As her hands close around the "beer can" she thinks that going by the word "jerk" she is certain that she has the right answer!

Over a view of a rather crushed . . . beer can . . . Tomoko notes that she did not tell her to castrate him! Fūka tries to brush it off by claiming that it looks like clay cannot handle her "technique." She continues that a real man's . . . beer can . . . is as "hard as steel," as she thinks "apparently," and can withstand her "Demon Jerk!" Tomoko interrupts her to insist that she does not care what she calls it. She then calmly tells her she can stop now. Inwardly, Fūka screams about Tomoko's eyes that stare down upon people. She then demands to know if Tomoko can do it. Tomoko calmly admits that she cannot since she is not popular like her. She then suggests that Shizuku can do it, who blushes over how senpai said her first name so naturally. Fūka protests, "this girl?" but transformed into a heroine of a shōjō manga, Tomoko orders Shizuku to show "this imposter the real deal."

Shizuku takes the clay in her hands as she suggests that they reform the model. "Like this," she says as her hands reform a now censored beer can model.

Tomoko and Fūka both watch in stunned admiration as they both inwardly proclaim: "REAL!!" Shizuku then announces that she will demonstrate, which she does in animesque light.

A chibi Tomoko corrects her that that is not "sex." 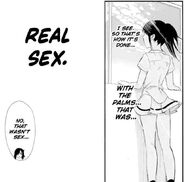 Original Art from the Artist 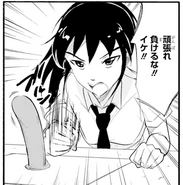