This first-part chapter is returns to Tomoko's perspective and is broken into titled parts. The cover depicts a first-year Tomoko alone amongst the collection of desks and chairs, thinking as she holds her pen. The Baseball Team Manager walks with two anonymously drawn boys. She suggests to one that his hair has grown long. The narration reads, "Writing diligently in a quiet place."

Tomoko walks with Yuri with the narration, "the day after the movie presentation." They are startled to see Masaki. Yuri calls out to "Yoshida-san," and Masaki returns the greeting. She stands in front of a number vending machines holding a drink can. She asks them what they are doing. Tomoko replies that they are looking for Shiki while thinking of movie ideas as they walk. Yuri asks Masaki where the "other two people" are, and Masaki replies that they did not show up, and she suspects they are skipping.

As Masaki and Yuri watch, Tomoko buys a drink, then crouches down on the sidewalk with it. Masaki quietly joins her, then Yuri, somewhat sheepishly, crouches down as well. As people pass by, Yuri asks Tomoko what, to which Tomoko replies that the chance to hang out like this would be impossible without "Yoshida-san." Masaki asks why, but Tomoko ignores her question and rhetorically asks her if she does not drink nor smoke. "That's right," she quickly confirms. Tomoko asks her if she ever thought about drinking or smoking; Masaki curtly denies it. Tomoko muses that when she saw college girls smoking during their college visit, she had the image of her smoking with "Yoshida-san and Yuri-chan." When Yuri asks why her as well, with a depiction, Tomoko explains that Yuri is the one she can most imagine becoming a smoker: "You seem like the type who'd live alone and smoke on the terrace."

She ignores Yuri's question as to why to continue to ask if once they are all twenty years old, could they all get together and smoke. In Tomoko's imagination, she and Yuri light their cigarettes off of Masaki's. Masaki asks her why she wants to smoke so badly. She suggests that if they just waited until they become twenty just to get together and smoke would be pretty lame. Tomoko happily replies that rather than being kids who smoke on a whim, being ladies who start smoking in their twenties will make them feel more like outlaws (アウトロー・autorō).

Yuri remarks that if Masaki says it is okay, she can start today. Chibi Masaki asks her why she is into this all of a sudden. Chibi Tomoko suggests that they could go on a school trip where they drink and smoke while watching a pornographic film they have not seen before over a depiction of this imagination. Chibi Masaki angrily asks why they would do that. Back in reality, Tomoko tells Masaki that the three of them have not been together recently, and she wanted to do something together. Masaki asks if there is anything wrong with them just sitting and chatting. Chibi Tomoko and Yuri sheepishly reply that there is not.

Tomoko continues that she now understands why "delinquents (ヤンキー・yankī)" hang out at convenience stores. When Masaki reacts with an "Aaaa?" Tomoko explains that there are more food and drink available than at a café, and there is alcohol and tobacco as well.

Yuri declares that she will also buy drinks.

Tomoko asks if Yuri and Hina know that boys call their "thing (アレ・are)" "son/little boy (息子・musuko)." Yuri denies that she does. Tomoko continues that while she has not heard it in real life, she has seen in manga and anime that protagonists call it "son/little boy (ムスコ・musuko)" and "my son (マイサン・mai san)." She declares that they sound stupid, and girls would not do it. She then suggests, as she imagines Yuri holding her lower belly, that if "Yuri-chan" declared that her "little girl/daughter (娘・musume)" is having a "rebellious period (反抗期・hankōki),"[1] they would question her sanity.

Hina suddenly brightly declares "my daughter!" which causes shock and fear in the Chibi Tomoko and Yuri.[2] She laughs as she explains that she was speaking like "Katō-san" while Tomoko and Yuri look in fear as a shadowy figure appears at the edge of the panel. Sweating, Tomoko inwardly swears while admitting that it was kind of funny.

The shadowy figure calls out "Nemoto-san."

Asuka sidles up to the shocked and bleached Hina and asks her what she said that was like her.

Shizuku sits on her usual bench around the tree outside talking to an unnamed friend on her phone. She explains that she is having lunch with her senpai today. The friend responds that she knows which is why she called her. She says that there is something she wishes to ask her. Shizuku agrees, but in animesque light, Tomoko arrives and apologizes for being late. Chibi Tomoko asks her if she was talking to her boyfriend, but Shizuku states that it was a friend from another school. Tomoko asks her if the first years have decided what to do for the school festival. Shizuku replies that they are suppose to decide during their home room period, but she admits that she really is not in the loop. Tomoko admits that she was as well. She explains that since she was a loner in her first year, the festival started and ended on its own. With a recollection of her walking down a hallway past the then unidentified Uchi, she admits that she did not do anything to prepare for it, so she spent her time wandering around the school. With a recollection of Megumi dressed as a mascot offering a balloon, Tomoko explains that she did receive some attention from a friend from another high school and the former student council president.

After a pause in the conversation, Tomoko asks her if, since she has nothing to do, would she help her. Initially surprised, she excitedly asks if Tomoko is working on a movie. Tomoko replies that she is but has not decided on anything yet. Tomoko then asks her why she does not propose her own idea. Chibi Shizuka stammers as Chibi Tomoko asks her if there is nothing that she wants to do. Shizuka remarks that Tomoko did a maid café during her first year. Tomoko corrects her that if she means her, she means her class. Shizuka admits that she would like to wear a maid outfit. Tomoko suggests that the idea in and of itself is too weak, and she needs to appeal to the boys and girls in her class. Tomoko suggests that most high school boys are idiots, so if she throws in words like "erotic," "dirty jokes," and "flesh,"[3] they will like it. She then insists that most high school girls are idiots, and they will support it if she throws in "Korea," "trend" (流行・ryūkō), and "spicy" (激辛・gekikara).

In her classroom as her unseen teacher asks for the ideas, Shizuka blushes as she writes. Her list WataMote Wiki cannot do justice in description. Unseen students criticize it, first thinking it comes from a guy, but then noting that the handwriting suggests it comes from a girl. One complains that the description is too long. However the unseen classmates immediately warm up to accept it. 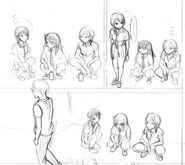 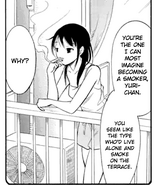 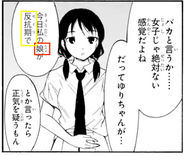 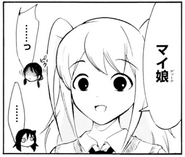 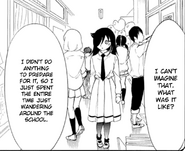 Recall to the cover of Chapter 20.