The cover depicts Nagi cheerfully directing a discussion of her class' "tea cup" ride for the festival. Natsu stands near her looking approvingly whilst Kaede writes on the blackboard behind her. The narration reads, "Each preparation . . . is fun to start."

In Class 3-5, Hina stands behind the desk and announces that, after a discussion, they are changing the film they will make into a selection of short films. Behind and to the side of her stand Tomoko and Yuri. On the blackboard behind her is a list:

Tomoko turns to Yuri and asks her what "Stupid Cool" means, but Yuri replies that she does not know. Akane happily explains that they are everyday life challenge videos. With a montage of anonymous male students trying to make baskets by tossing the ball behind them or toss bottles into a receptacle behind them, Chibi Akane explains that onetries to look cool doing something pointless. Chibi Tomoko emits a "hē (ヘー)."

Looking more concerned, Akane asks Tomoko if she is sure about the change. Sweating sheepishly, Tomoko confesses that her original idea required revision, then adds since the time allotted increased, she wondered what they should shout. Blushing a bit, she notes that since they have more than an hour[1] she figured everyone could make short films based on various ideas. Akane agrees that it is fine since they are running low on time. Hina turns to Akane and adds that she and Tomoko want her and "Yocchan" to be the directors of the "Stupid Cool" film. Akane asks if she is sure, and Tomoko, sweating, stammers "y-yes," then explains that she and Hina can talk with boys. She adds that she is a "Chigyu Girl"[2] while Yuri is a "gloomy braggart," which means that they cannot teach boys to act. The scene focuses on presumably Akane holding a phone which has "Stupid Cool" movies. She asks what they should do for a plot, then asks if they should simply copy some internet videos. Presumably Tomoko responds that they should consider creating both parodies and originals.

Hina, Tomoko, and Yuri silently watch Akane at the from of the classroom chatting with Wada, Suzuki, and Yoshinori. Hina turns to Tomoko and tells her that, based on their ideas, the boys enjoyed the "Stupid Cool," while musicals were popular with the girls. Tomoko mutters agreement as she stares ahead. Hina asks about doing a musical then asks her for ideas. Irritated, Tomoko replies that she has been thinking that she has been given too many things to do, then she directs Hina to also think about it. Hina reacts in surprise, but Tomoko continues that she is the one who proposed the idea for a short film collection and is the one who is writing the scripts: "Why don't you do something too, Nemo?"

"Truly useless (本当役立たず・hontō yakutatazu)," Yuri flatly offers as she nods her head, but Angry Chibi Tomoko retorts that Yuri also stands around doing nothing, and she is no better than an ornament. While Yuri stares ahead contemplating the idea of "ornament," Hina snaps that she left Tomoko in charge, because she thought she could handle it. She adds that she was fine with her original idea, but Tomoko chickened out (ブレる・pureru)[3]. Tomoko barks back that she did because of the situation Hina put her in. For her part, Yuri stares ahead wondering about "ornament." Tomoko continues that the fact remains the idea has changed, and they need to think together. She encourages them all come up with something based on the ideas suggested, then adds that Yuri must too. Surprised Chibi Yuri questions that she, too, must think about it.

A teacher writing on the blackboard, then Hina and Yuri thinking over their notebooks in class, and two girls chatting as they walk in a hallway marks the passage of time. In the empty classroom, Tomoko suggests Hina go first. Hina cheerfully suggests the blackboard animation and commercial parody. She describes cartoons on the blackboard that will step out to be students in costume. When she asks what they think, Yuri merely stares at her whilst Tomoko has a bit of a blush. Tomoko curtly replies that her idea was so boring she could only blush which sends Chibi Hina into a rage.

Tomoko then turns to Yuri. Twisting the knife a bit, Yuri looks at her note as she off-handedly observes that she figured doing the same thing as "Nemoto-san" would not be interesting. Hina remains flushed with rage. With a view of her notes which contains, "Movie Idea" as a heading with "Cast Protagonist Tomoko," then the description, "Musical about a band wanting to perform at the school festival," Yuri begins her explanation that she used the movie they watched with Tomoko as a basis. Chibi Tomoko guesses that it is a parody. With a view of the other page of her notebook that reads, "Yoshida Masaki – Drums," "Tanaka Mako – Keyboard," and "(Reports Tomoko's theft to the school)" underneath the note on Mako, Yuri continues that it is a musical film starring Tomoko about a band wanting to perform at the school festival. Tomoko confesses that she is hesitant about herself doing that but tells Yuri to continue.

The scene shifts to a stylized sketch of a, stylized, Tomoko in a high school uniform walking past a musical instrument store that has various guitars displayed in the window. Yuri narrates that the band has practiced but on a certain day, Tomoko sees a guitar she has always wanted. The next stylized panel reveals a Malevolent Tomoko has shoved a guitar down her sweater. Yuri continues that, wanting it badly, Tomoko steals it. Chibi Tomoko responds that she is starting to feel uneasy about it.

The scene shifts to Tomoko hung in the auditorium. Chibi Yuri narrates that on the day of the festival, she is executed. "Off screen," Tomoko demands, "for shoplifting?!"[4] The scene pulls back to reveal it as being on the screen in their actual auditorium. Yuri adds that the credits then roll over that last scene.

Tomoko and Hina stare at her. Yuri's face is reveals to be blushing in a manner that if WataMote Wiki did not include it, it would be an actual capital offense. Presumably Tomoko demands to know why she is blushing. Yuri confesses that it is because her idea was not as funny as "Nemoto-san's." Tomoko corrects that it is not that the joke failed, but that it is disturbing. With a view of the chalk tray beneath the blackboard, Chibi Tomoko rhetorically asks that Yuri came up with that plot because she thought it would be funny, then she adds that that is scary. Chibi Yuri explains that she thought Tomoko's misfortune would make her shine. Tomoko then asks why she sounds like a deranged fan.

Back to the three of them, Yuri adds that since Tomoko playing the guitar for the band scenes would be impossible for her, she figured she would just kill Tomoko instead. Tomoko replies that Yuri killing her out of consideration is unbelievably scary.

Hina's phone bleeps as she receives a text. She informs the other two that Akane has texted her that she and her group are outside filming, and she asks if they want to go and watch. Tomoko is amazed that Akane already gathered people, then concludes that "Cheery Girls"[5] know how to attract a crowd.

The scene shifts to a phone screen that shows boys trying to casually toss bottles over their shoulders up to the top of a staircase. On a balcony, watching it, Akane comments to Shiki that it does not seem very good, and Shiki suggests that the composition may be off. Shiki lies on the ground as she suggests they try this angle. Akane calls out to Yoshinori to start.

Hina stands wide-eyed as she listens to Akane command the start of the next take. One boy cries out that they were so close, and another encouraged him that he can do it. From Hina's perspective, Akane asks Shiki how it came out, and Shiki shows her and declares that it looks good. The three boys near them declare that they can do it the next time. Hina thinks that this looks fun.

She looks back at Tomoko and Yuri who are watching her. Yuri flatly suggests that if "Nemoto-san" wants to go and help them, she can. She adds that she and Tomoko will simply keep having a meeting forever. Hina asks what that is going to accomplish. Tomoko intercedes to acknowledge that she knows how "Nemo" feels, and she thinks that it is time to take things to the next stage. To Hina's "え?" Tomoko produces a "free ticket" for a high school festival at her friend's school.

When Hina asks, "Your friend? From another school?" Yuri condescendingly suggests that she is sure that "Nemoto-san" does not know about this, there is a girl named "Naruse-san" who was Tomoko's only friend. Sweating, Tomoko tries to question that Yuri does not actually know that she was her only friend.

Hina concludes that they have not made any progress. 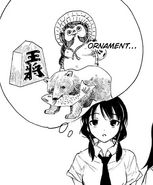 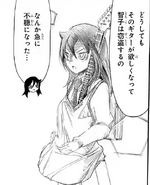