This chapter is broken up into titled sections. The cover page reveals that this is a "second part" of the previous chapter which was not identified as a "first part."

Walking the school corridor, Koharu notices Kakinuma and the heavy-set member of Shiki's Otaku Group™ approaching and laughing as they watch something on the heavy-set's phone. As chibi, she inwardly stammers, "th-those guys."[1] She recalls Sachi denouncing both of them and one other as "disgusting" as she admits that she still has not apologized to them, even though she was not the one who said it.

She stands in front of them and sweats as she stammers, but she sees Sachi approaching the Otaku from behind. She violently grabs the two by their neckties and pulls them around a corner. As Sachi makes her way into her classroom, a panicked Koharu thinks it is dangerous for her to be discovered in this situation. Meanwhile, both Hina and Akane walk by with both wondering what is happening. For his part, Kakinuma notices the pair. Koharu releases his tie, and he peers around the corner to watch the departing Hina and Akane who have resumed their conversation. Inwardly, he wonders if the two thought they saw something bad.

Koharu notices this, and she explodes rhetorically demanding to know why would a "creep" care what girls think.

She turns from them and continues her tirade. She declares that Futaki[2] is the only girl one would hang out with them. She then rages as she leaves them that "creeps" like them should stay in the classroom. She orders them not to inhabit the hallways.

She departs with a "Creeps!"

Adjusting his tie, Kakinuma asks what her problem was. His Corpulent Companion, blushing deeply, agrees, but inwardly celebrates that a girl pulled his necktie.[3]

Tomoko happily discourses that one often see stories online about comedians having episodes (エピソード) where they shit themselves. She remarks that she doubts that they shit as much as they claim.

Both Hina and Yuri stare at her with looks of shock.

Tomoko continues her lecture by asking if guys have looser anuses[4], or is it similar to how some elementary school children claim they cannot defecate while at school. While maintaining her wide-eyed look of shock, Yuri notes that girls have episodes where they claim they got wet from water in a flower vase when it was actually urine. She then mentions that she heard that girls have smaller bladders than guys.

With a blush, but also with enthusiasm, Tomoko replies that she has had many episodes where she has wet herself. Hina angrily notes that she will just tell them anything.

With her face, Sachi sits at her desk staring at her phone. She muses that tomorrow is "Koharu-chan's birthday." With a flashback of her without her face with Nori and Maki, she recalls that she was together with them. Holding a small present, Maki declares, "This is cute!" The year previously, "Makocchi" picked the present, so she did not think about it. In the flashback, a younger Mako asks her if "Minami-san" will like it. She responds that it is fine, whilst Yuri stands watching next to her.

Back in the present, Sachi leans back in her chair as she wonders what Koharu wants. On her phone, she reads some messages from Koharu: "I get it," and "From ugly to fugly."[5] She types the replies, "Today," and "It there anything you want?" as she muses that she can ask her directly since every year she falls for the "surprise birthday."

Sachi muses that she did not notice her intention, but she did not tell her what she wants. She then imagines handing money to Koharu who eagerly accepts it. She continues her musing that Koharu is dumb enough to accept it even though it is not a present one gives a friend.

As a passage of time, anonymous students stand chatting around her as she continues to sit and text on her phone. With a view of the window, she grouses, "what a pain (面倒くさ・mendōkusa). . . ." She enters a store, picks up what appears to be a spray perfume from a "Princess" line. "This will do," she thinks. She passes a display of cards which include those designed to contain gifts of money.

The following day, she sits at her desk taking notes on what can only be a scintillating lecture on the formation of the Privy Council in 1888. In her class, sitting behind Shiki, Koharu receives a text directing her to come to the usual place for their lunch break ten minutes later. Sachi leaves the campus, the scene shifts to an outside of a cake shop where, from within, she asks how long it will take. The person inside responds, "5 minutes." Outside, Sachi walks with her phone and carrying a small box. She muses that she has to hurry before the lunch break ends. She inwardly complains that she planned to do this during lunch break like during the previous year, but if she had known how difficult it would be, she would have done it after school. She concludes that doing this alone is really a "pain."

She sees Koharu sitting in the secluded area looking at her phone.

Wordlessly, Sachi methodically unwraps a slice of cake and places three candles in it. She briefly notes that she forgot to bring anything to light the candles. She confesses that she thought she could do this all by herself, but she realizes that she had been relying on Maki, Nori, and Mako more than she thought: "It took me ending up alone to understand that."

Koharu startles, and Sachi appears holding the cake and announcing, "Happi Bā. . . ." She switches to the more traditional "congratulations" as she presents the cake. Koharu's face brightens. As she sits with the cake and a single "♡" near her head, she thanks Sachi and confesses that with Nori and Maki not being around she thought this would not happen. With a view of the unlit candles, Koharu asks why they are not lit. Sachi replies that there is no point since it is noon.

Koharu accepts this, but then asks why she stopped singing. With a smile, she commands Sachi to sing. Sachi reacts with a shocked "E?!" and then rhetorically asks if it is not hard to sing when there are only two people.[6] Koharu hears "nori" asks "Nori?" with her chibi face in the speech bubble, then asks if she is referring to the "bad Nori" when she says "No Ri." Sachi explains that she sang when there were three people, but is it not hard to sing when there are only two? Undaunted, Koharu insists that since it is a birthday, and there is cake, there has to be a song.

With a sheepish expression, Sachi sings the conclusion of the song.[7] Koharu squeals delight then licks the plastic wrapper of her cake. Sachi watches blushing.

The next panel focuses on her wrapped present. She tells Koharu that along with the cake she has a present. Koharu squeals again that there is more besides cake. As she takes a bite she declares that with her doing these things for her, she does not need Nori nor Maki anymore.

Sachi smiles as she regard Koharu enjoying her cake. She muses that Koharu is "truly simple." She was delighted by what Sachi deems to be a "sloppy (適当・tekitō)" birthday party.

The final panel reveals that she has her left hand in her skirt pocket holding one of the money cards. She continues her musing that she had a second present prepared for her. If that had not worked, she planned to call Mako, but since this went so easily, she did not have to do that. 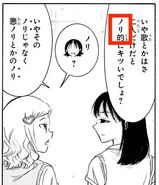 Shown: Evil can be Cute!