The full-page opening with the narration "Those were good times," depicts Tomoko and Kotomi walking on either side of Yū when they were in middle school.

This chapter opens with a flashback, later revealed to be Kotomi's, to Tomoko playing a video game in her room with Yū while Kotomi sits reading a book. Yū notices that the time is just past 6 P.M., and she needs to return home. After Yū leaves, the two seem uncomfortable, and Tomoko inwardly shouts at Kotomi to leave. However, she offers to play a video game with her. As the two play, a blushing and nervous Kotomi asks Tomoko about her younger brother and notes it is Valentine's Day. She struggles to say she wants to give him chocolate, but she can only manage to stammer, "I-I-I..C-C-C...wanted to c-c-choc- ."

Tomoko immediately concludes that Kotomi wants Tomoki's "cock," and interprets Kotomi's blushing and sweating expression to be "lewd." She further concludes that Kotomi will not leave until she sees her brother's genitals. Since she wants Kotomi to leave, Tomoko promptly finds her brother, takes him to Kotomi, then simply announces that "Komi-something wants to see your dick!" as Kotomi goes into shock. As the siblings bicker, Kotomi recovers and silently leaves. Both blame the other for making her leave. Meanwhile, Kotomi runs from Tomoko's home screaming continuously

As the flashback fades, Kotomi recalls that after this incident she ended up in a different class from Yū and Tomoko so she did not speak to her much even when they passed in the hallways. Ironically, in Kotomi's flashback, Tomoko does not notice Kotomi because she is imagining something pixellated-level lewd. During graduation, Kotomi left without saying anything to Tomoko.

In the present, Kotomi notices that Tomoko now acts friendly towards her. She is unaware that Tomoko surmised that since she believes they are both loners, they should get along. After school, Kotomi walks by boys playing and hears the name "Kuroki" and realizes that Tomoki is also a student.

In the library, Tomoko notices that Kotomi keeps looking at her as she eats her lunch. She thinks that Kotomi has finally taken an interest in her. Kotomi does approach Tomoko to ask about her brother. Tomoko finally remembers who Kotomi is: "The one who was sexually interested in my brother?!" While Kotomi tries to politely dismiss the previous incident as a misunderstanding, Tomoko pays no attention as she inwardly judges Kotomi as a pervert she wished she had not tried to get to know. When Kotomi concludes her attempt to reconcile with Tomoko, Tomoko finally pays attention and calmly messages her brother on her phone to come. Kotomi protests that she is not yet "ready" to meet him.

As they walk together, Kotomi thinks she and Tomoko reconciled while Tomoko inwardly seethes over what she thinks is Kotomi's attitude. Kotomi confesses that she did not like Tomoko in middle school but now feels they can get along. Inwardly, Tomoko explodes at the thought someone would think of her that way and, even more, tell it her to her face. Clueless to Tomoko's reaction, Kotomi sees Tomoki and while blushing asks Tomoko what she should do. Tomoko inwardly accuses her of feigning ignorance.

Tomoko loudly explodes at Kotomi. She shouts in the hearing of Tomoki and others that Kotomi, "came to my house to see my brother's cock!" While Tomoki wonders what his sister is doing, Kotomi tries to correct Tomoko, but Tomoko continues publicly unleashing on Kotomi. She screams that she never liked Kotomi, erased her from her memory, and accuses Kotomi of "being after dicks!" and serving as a librarian simply to prey on boys. She leaves Kotomi shattered as unnamed students look on. 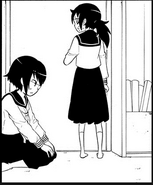 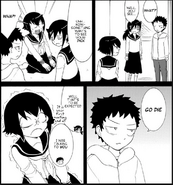 Tomoko lost in her contemplation. . . .