Tomoko attends her school's assembly for the summer break which starts the following day. On the main page, she walks past the school's practicing baseball team that is preparing for a tournament as she reads her phone. She passes and overhears a number of groups of students who have plans. Finally, she finds herself at a bus stop with Kotomi. They reluctantly decide to sit together on the way to meet Yū, but they do not speak to each other until they arrive to the cafe.

At the cafe, Yū is delighted that the two came together. She reminds them that they agreed to do something together. They brainstorm on something to do for their summer break. Tomoko excitedly suggests bug catching, and explains that by letting the various insects devour one anther, the strongest bug can then be used to curse someone.

Kotomi shows some interest but Yū, who has no interest in bugs, suggests they go to the beach instead. Since neither Tomoko nor Kotomi have swimsuits, they go to a mall to pick out swimsuits. Both Tomoko and Kotomi are nervous about trying on swimsuits, though Kotomi finds one set that would allow her to cosplay a favorite anime character. Her conversation gets her and Tomoko distracted talking about Comiket, and they do not even try on any swimsuits. Yū nervously watches them wondering if she should just let the two catch bugs or "go to Comiket or whatever by themselves." Yū suspect the two have become friends since they attend the same high school, and she begins to feel lonely.

They walk home at night just in time to watch the fireworks. Kotomi thanks Yū for inviting her out, which prompts Yū to let the two of them know that they should text her more often. Yū inwardly admonishes herself that she should be happy that Tomoko and Kotomi seem to get along.

The next day, Yū wakes up to 24 messages from Tomoko and Kotomi. 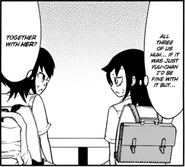 Yū is stunned by all of the texts she received from Kotomi and Tomoko while she slept.