Uchi returns to the room surprised to find the rest of her group still awake having tea. She turns in and tell them to keep the noise down. Yuri agrees that they should all go bed as well. Tomoko lays awake staring at the ceiling since she and most of her group had already slept through the day. She wonders if anyone else is awake and begins to think of increasingly insulting questions to discuss. Eventually, she realizes that the others will think she is starting a fight. She sleeps next to Uchi and stares into her sleeping face. She sees a resemblance to Yū when Uchi's face is half-hidden and her eyes are closed.

Thinking of Yū makes her reminisce about her middle school field trip where she tried to molest Yū in the dark but accidentally stimulated the sleeping Kawamoto instead. Back in the present, Tomoko tries to cast aside the memory. She wonders what caused her to remember such an embarrassing moment. Returning to her memories, Tomoko recalls making farts sounds blowing on her wrist. There are some giggles, and Yū calls out to her. Returning to her present and enjoying the joke, Tomoko uses her forearm to let one truly "rip," and probably Yoshida angrily storms to a window to open it while cursing whomever is farting. Tomoko recoils in fear and embarrassment then, shaking, types on her phone.

Back in her home, Yū sleeps soundly but is awaken by her phone. She happily notices that it is a message from Tomoko. The message reads: "Yū-chan, You didn't think I really farted back then, right?" 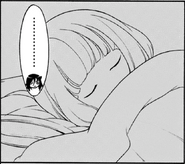