In the library, Kotomi watches and glares at Tomoko as she browses. Tomoko turns in to her a request form which describes Kotomi as a "peeper." The fuming Kotomi watches as Tomoko then tries to take pictures of an animage which Kotomi tells her is illegal. They argue and Tomoko feels relieved by the release of stress. She goes home but leaves behind her phone.

Once she gets home she realizes her mistake and is terrified people will find it, view its contents, and see that she is a huge pervert. Soon enough, Kotomi calls Tomoko and reports that she found the phone. Tomoko believes this is the worst possible outcome and demands that she should come over right away with it with the promise she will give Kotomi what she wants.

When Kotomi comes over, Tomoko questions the her about how much she snooped. To Tomoko's surprise, Kotomi did not look through her phone. Tomoko realizes that Kotomi might actually be a good person and feels bad, though she still wishes Kotomi was "worse trash" than her. As a reward, she lets Kotomi into Tomoki's room and offers to allow her to do anything she wants in it for 30 minutes "within reason."

Kotomi is at first reluctant but gives into temptation. She ends up falling asleep in Tomoki's bed, and Tomoko forgets about her. Later, Tomoki comes home and sees a folded girl's school uniform blazer and someone in his bed. Believing it to be Tomoko he rips off the covers and yells but is surprised by the sight of Kotomi. Kotomi lies and says she was playing hide and seek with Tomoko and quickly runs home, leaving her blazer, glasses, and uniform behind. Tomoko sees that her phone's wallpaper is a picture of Tomoki. 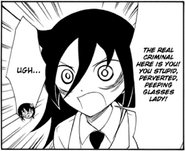 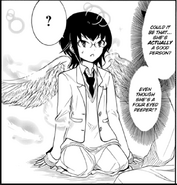 Tomoko has a New View of Kotomi