In class, Mako stares at Tomoko and contemplates what to do about lunch. She internally admits that she does not know Tomoko, other than as a girl who "randomly says weird things," despite eating lunch together on a regular basis. Uchi interrupts Mako’s thoughts and asks if she was staring at Tomoko because Tomoko did something perverted to her. Uchi boasts that Tomoko "likes cute girls." Mako remains dubious of Tomoko’s perverted tendencies, which causes Uchi to exclaim that Tomoko stole panties from her. Her outburst causes Tomoko to look their way, and Mako waves “hello” to her while Uchi runs back to her seat thinking that Tomoko is "molesting" her "with her eyes." For her part, Tomoko wonders why Mako waves at her. They both separately come to the realization that they might have to eat lunch with the other, which worries them individually since they do not know each other very well. 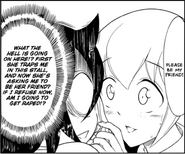