This chapter starts with an afterword from Nico Tanigawa. They discuss the voice actress for the upcoming anime of WataMote. They also include tidbits of their time working with the anime studio and getting the project to be as close to the manga as possible.

At home Tomoko plays an otome game and she notices the heroine looks like Yū. She decides to get the character to hook up with a guy. The next day, Tomoko meets up with Yū to get ice-cream but ends up secretly lusting after her because of the game. 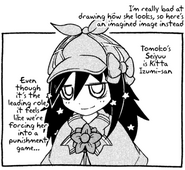 Retrieved from "https://watamote.fandom.com/wiki/WataMote_Volume_04_Omake?oldid=17546"
Community content is available under CC-BY-SA unless otherwise noted.