The narration states that this chapter takes place a few days before the previous chapter.  Before the start of winter break, Okada hands out flyers inviting people to a Christmas party which Tomoko does not plan to attend.

At home, mother asks Tomoko to go downstairs so she can vacuum her room. Her mother sees the flyer on Tomoko's desk and gives Tomoko a party allowance, which leave Tomoko no choice but to attend the party. In preparation, Tomoko decides to wear all black clothing and calmly walks into Tomoki’s room to use hair wax without asking to copy the hairstyle of a stylish heroine from one of her video games. She tells herself she is not really interested in going while imagining Okada telling her she is jealous over how she looks.

The day of the party, Tomoko sees only Nemoto and Okada. Not wishing to have to talk to them, Tomoko hangs back. When a group of her classmates arrives, she tries to greet them only for them to pass by her without realizing who she is. Briefly, she thinks a classmate calls to her, but it is someone else. Disheartened, Tomoko leaves and spends the money at an arcade and bookstore.

Tomoko's mom asks her when she returns home early if she had fun. Blushing, Tomoko lies that she did. She then curls up with her stuffed pillow listening to the weather on the television. 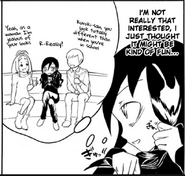 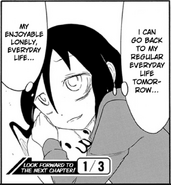 Retrieved from "https://watamote.fandom.com/wiki/WataMote_Volume_04_Special_Edition?oldid=18143"
Community content is available under CC-BY-SA unless otherwise noted.