This chapter takes place a during Christmas of the previous year directly after the V02 Special Edition. Sitting up in her bed, Tomoko stares out her window at 2:15 A.M. She wonders when she fell asleep, scans her room, and realizes she must have fallen asleep by using the electronic massager while playing Naked Butler. She notices that her phone has a text message from Yū stating how she enjoyed karaoke with her friends while hoping she can go with Tomoko next year. Tomoko had been sending messages to her every 30 minutes since 6 P.M. and receiving a reply back from Yū within 5 minutes, but Yū's last one took her over 3 hours to reply back. Tomoko immediately discards Yū's claim she was at karaoke and instead jumps to the conclusion that Yū was having sex with her boyfriend. Tomoko imagines that while she and her brother--who does not have a girlfiend--had a small Christmas party, Yū spent her time with her boyfriend. She then imagines how the night "progressed" between Yū and her boyfriend, culminating with the now "non-virgin" Yū becoming confident, voluptuous, and glowing.

Tomoko collapses face-first into her bed. She obsesses on what Yū "did" during the 2-3 hours in which she did not respond to her texts. Tomoko then grabs her purple stuffed toy and role plays Yū's boyfriend. After a bath, Tomoko sits next to her toy and uses her massager on it, imagine the toy to shiver in response, as her stuffed pillow "looks" on.

Tomoko's one-track mind makes no stops on the way to her conclusion. 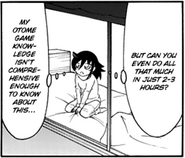 If only it was so easy. 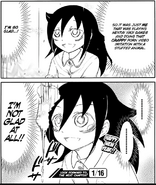