This Special Episode returns to Christmas. On Christmas Morning, Tomoko happily announces to her mother that she will just have left over cake for breakfast. Alone in her room, Tomoko plays with her "personal massager" in a manner the does not violate its warranty. Tomoki opens the door to her room, but before he can speak, Tomoko immediately asks what they should do together and what present he got her. Tomoki ignores this and announces that he plans to have guest over and she needs to leave him alone. Tomoko immediately accuses him of having a girl over; he refuses to clarify. After he slams her door shut, Tomoko inwardly declares that no one of the Kuroki family can have "illicit relations" and vows to "take responsibility" and kill the girl! Having dramatically pulled the hood of her "hoodie" sweatshirt over her head, Tomoko listens through her wall. She is disappointed to hear his guests are all boys. She turns, instead, to her computer to register on a social media site under an alias to check up on her classmates. Meanwhile, as Tomoki and his friends prepare to leave, Tomoki excuses himself to use the bathroom. When he leaves, one of his friends decides to leave Tomoki a "present" of a pornographic DVD. Later, Tomoko lays bored on her large purple plush toy. She notices the silence from her brother's room and goes to check it out. She finds the room emply with his PS3 still out. She decides to play some games and notices that one is already loaded. She checks the title.

The scene switches to Tomoki demuring from going to karaoke. As he leaves, some distance away, Sayaka points to him while a blushing Akari waves her off. When Tomoki returns home, Tomoko demands that he not approach her. He ignores her and tries to give her the exchange present he got from classmates. Tomoko discovers it is a "cute" girl's "Santa" costume. Horrified, Tomoko wonders if Tomoki wants her to wear it. Meanwhile, Tomoki discovers the "present" left by his friend: My Sister in Black Tights. As he curses him, Tomoko enters wearing the sexy Santa costume with a disturbing expression. She wordlessly tosses black tights at him and leaves slaming his door. "And so ends Christmas," concludes the narration. 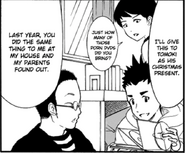 Tomoko discovers the "present" Tomoki's friend left in his PS3.