The side narration announces the traditional Christmas chapter. During Christmas, Tomoko reads in the Book Off store until 5 P.M., when she decides it is time to return home. At home she feels lonely, wishing that she had friends or a lover to be with. She feels the latter probably beats her usual practice of playing "BL" games alone during Christmas. She does admit that she has it better than other loners in that she always spends her Christmas eating with her family and receives Christmas money from her father. For those still at Book Off, she muses, "'Christmas' must be anathema to them.'"

The next day in class, Tomoko hears Hina invite Okada to go Christmas shopping for a gift exchange. Inwardly, Tomoko figures that they have friends to spend Christmas with. She spends the day at Book Off until 5 P.M. again. As she leaves, she pictures herself five years in the future doing the same thing on Christmas Eve. She also realizes that the previous year she spent every day until December 23rd at Bookoff.

The next day she asks Yuri| if she has plans, which she does. She then considers Yoshida but fears "delinquents" are busy fighting during the holidays. As she leaves school, she passes the library and does not consider asking Kotomi if she has plans. She assumes that Yū will be busy with her boyfriend. She decides that maybe it does not matter what she does for the holidays, but changes her mind once Yū calls to asks if she wants to get together with Kotomi. She concludes something must be wrong with a person who spends it alone.

The side narration asks, "But what about your boyfriend, Yū-chan?!" 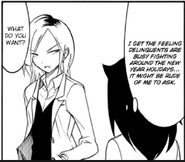 Tomoko reconsiders asking Yoshida if she has plans for Christmas.