The side narration of the cover page announces this chapter as a collaboration with the Chiba Lotte Marines. Kotomi invites Yū and Tomoko to hang out and watch a baseball game. Tomoko states she looks forward to see how "trash" professional players are, which prompts Kotomi to vehemently defend them. Tomoko tries to cite television reports only to be drowned in Kotomi's dedicated defense of her team.

There's still time before the match starts, so the group waits by the staff entrance to see the players, though only Kotomi is interested. Later in the QVC Marines Field, Kotomi suggests they eat the motsuni sold nearby. Neither Tomoko nor Yū are up for this, and they end up getting different food despite Kotomi's protests.

The game begins with Kotomi bringing up fact after fact about every little detail in the stadium, including the professional history of a vendor. To Yū and Tomoko's polite consternation, Kotomi vows that next time they will both have uniforms and memorize the team cheer. After the game, Kotomi mentions that the Lottes are doing a collaboration with an anime or manga with a loner protagonist. Tomoko claims she is currently reading the manga. The chapter ends with a shoutout to the anime, OreGairu. 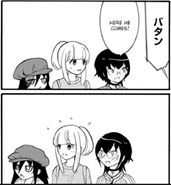 Kotomi blushes as a player passes by.

Retrieved from "https://watamote.fandom.com/wiki/WataMote_Volume_10_Special_Edition?oldid=19026"
Community content is available under CC-BY-SA unless otherwise noted.