This Omake is divided into two sections:

Tomoko walks past Koharu Minami and Asuka Katō thinking she will go to the bathroom. Minami turns to Hina Nemoto and asks her to imitate Tomoko again. Hina complies with a stammering and whispering, "A . . . A . . . Go . . . Goodmorning, Nemoto-san." Delighted, Minami compliments her imitation capturing Tomoko's strangeness and creepiness. She then tells her that earlier that day, Tomoko fell and made the sound "gue (ぐえ)" as she laughs. Hina responds that it was not her intention to ridicule Tomoko with her imitation. Sweating, Minami recognizes the mood change but thinks that it does not matter since after they become third years she will never see Hina again.

Tomoko sees Mako and Yuri sitting with Yoshida who is playing pachinko. Yuri remarks Tomoko is also coming and the event is about to start. When Yoshida asks why, Yuri rhetorically asks Yoshida does she not need to watch it or the situation may become bad, and why else she[1] has had to protect that "brat (ガキ・gaki)" for two years. She then suggests that perhaps she misunderstood what Yoshida was doing the day before. Yoshida angrily tells her to be quiet. As she loses, Yuri asks what she did wrong, and Yoshida explains that she twists the handle to much which causes the balls to bounce too much. Yuri continues that she is fine going alone or with four people. After a pause, Yoshida admits that she is hungry. 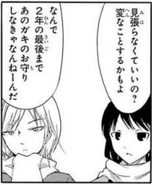 While the "Speech Bubble" appears over Yoshida, her mouth is closed. Either way, they probably agree that "babysitting" "that brat" is tedious.
Add a photo to this gallery

Retrieved from "https://watamote.fandom.com/wiki/WataMote_Volume_12_Omake?oldid=19093"
Community content is available under CC-BY-SA unless otherwise noted.