This Omake is divided into sections.

To her shock, Uchi's unnamed friend [1] excitedly points out to the unnamed Kayo the place for Kowarith's show. Uchi sweats and worries. Kowarith greets them with a "wahai" which Kayo, Nagi, and the Girl with Braids eagerly returns. Kowarith then appears confused. The three see Uchi with her hair changed, and eyes in a different emoji style (> <) standing next to Miyazaki. They collectively ask "Emiri?" and she stammers sweating, "w-wrong."

Rena tells Yoshida and the currently unnamed Anna Haruna that she needs to visit the bathroom. Anna promises that that they will wait there for her. Rena walks by Futaki who is having her picture taken with a costume panda. To herself, Rena declares that it is a "Kimo Panda" and decides to walk over as Futaki waves goodbye to the figure. Meanwhile, Yoshida grows impatient, and Anna suggests they look for her. They find Rena talking to the costumed panda. Rena appears to tease the costumed worker to come with her and asking what hour his shift ends. Rena insists that she has someone who wants to see him as she playfully punches him in the "stomach" as she promises it will not take him a lot of time.

Nico Tanigawa, the author and artist, walk as the author explains that he went to an amusement park to research the material for Volume 13. The artist notices a theater with the title "Kowarīchi" (コワリィッチ) and notes she does not know what is the attraction. Another sign gives a 10 minute waiting period. After 30 minutes they finally enter. Later, they slump on a table and note that the attraction is the model for Chapter 127.

The author bikes "one day in Makuhari," and sees a well-endowed young woman. To himself he thinks he recognizes her as a "Gravure idol" from a late-night program as he bikes away from her still looking in her direction. The narration notes the pachinko parlors of Makuhari have many "Gravure idol" performers. He does not notice a post and slams his left hand into it. He thinks that it hurts, but he wonders if the pain means he broke it. The caption states that he did break it.

Not Shown
Respect for Endangered Species 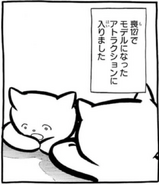 "We have suffered for our art! Now it is your turn!" 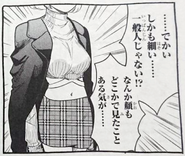 Author's Distraction
Add a photo to this gallery

Retrieved from "https://watamote.fandom.com/wiki/WataMote_Volume_13_Omake?oldid=20897"
Community content is available under CC-BY-SA unless otherwise noted.