Tomoko sits patiently as Katō applies make-up on her. Katō pauses, smiles, and asks if Tomoko can look up so she can add a line on her bottom lid to make her lower eyelashes match her upper. "Like this?" Tomoko asks sweating as she looks up to allow Katō to draw under her left eye.

She begins to shiver.

To herself, a quite ecstatic but unable to do anything during the time Tomoko decides to make "double-peace" signs with her hands under the desk. As Katō continues to draw under her eye, the shaking, sweating, and blissful Tomoko tells herself that "she sure is making my eyes go up, if you know what I mean. Hehehe. . . ."

From the door to the classroom, a horrified Uchi watches and rants, "she's cumimg from make-up?!! Disgusting!! Disgusting!"

Megumi Imae walks with an unnamed friend on the campus of Aoyama Gakuin University. Her friends asks her if they can take a little break, and Megumi agrees. The girl continues to thank her for her help then confesses that she feels bad asking for help from a first year. Megumi replies that it is fine since she use to do such things a lot in high school. Her friend asks her if she knows any of the visiters. Megumi starts to answer that she wonders when she looks in the direction of Uchi, Tomoko, and Katō. Tomoko stares at her smiling and sweating. Uchi seems to notice Tomoko staring, while Katō is looking in another direction.

Megumi stares with some surprise back at Tomoko as she and her friend continue walking. Her friend seems to notice Megumi's look and asks her if something happened, but Megumi replies that nothing did. Megumi touches her bossum and thinks "good."

As she continues to walk away with her friend, she thinks, "I will wait of course, Tomoko-chan."

Tomoko looks away from her direction blushing. Katō looks at Tomoko turning away and smiles. 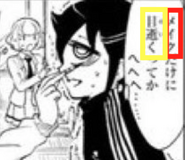 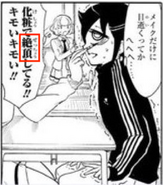 Uchi questions how the application of make-up can help one reach the summit . . . probably. 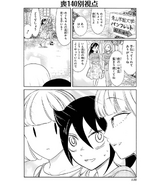 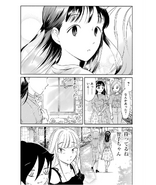 "I will wait of course, Tomoko-chan."