This special resulted from fan votes.

Hina, Okada, and Yoshinori Kiyota appear on the cover that has the caption, "Chance encounters. . . ." The comment reads: "Book☆Walker Special Edition."

Yoshida peacefully snoozes on a bench in the school courtyard. Hina sees her and thinks that as "Kuro" has said, Yoshida really likes to sleep. She continues to muse that unlike "the rest of us," Yoshida does not seem to care that her behavior stands out or if anyone thinks she is a loner.

Hina decides to try the same position on the ground. She finds the sun still dazzling even with her eyes closed, and she feels she is still too nervous to fall asleep. She muses that the old her would never have tried this.

Later, she talks with three boys at one of their desks. One points to a boy with glasses and teases him for buying the Blue Ray of Anohana. Hina asks him if she can borrow it. Outside, "Miki-chan" asks her if she enjoys her new classmates. Hina admits that she is not sure then turns the conversation back to Miki. Miki reveals that a boy they know, Kojima, confessed to her. When Hina asks if she will date him, Miki is unsure, and Hina starts to respond, "Well, if you're not sure, that at least means -" but the rest of her reply is not shown.

At home, junior high school Hina happily watches an anime. She muses that she prefers the "slice of life" series where everyone gets along over romances and "battle shōnen."

Hina then dreams of seeing her two friends looking at pictures of boys at their desk. When she asks them what they are looking at, they whip them away and claim she cannot handle them. Hina asks if it is "BL" material, since she can handle it and cheerfully asks to take a peek, but the girls insist that it is more than that. One claims a mere "plebian" (一般人・いっぱんじん・ippanjin) such as Hina cannot handle it.

Hina then dreams of a number of her classmates discussing what her two friend were seen looking at while "drooling." One imitates them, "Oh my god! Look those bishies are sooo hot!" Hina laughs with them.

She next dreams of approaching Kamata and Yamaguchi from behind. She stops when she hears one tell the other that she heard, "she was talking crap about us along with the rest of them!" The other agrees that she always had the feeling Hina was looking down on them. As Hina walks away from them smiling but inwardly protesting that she never said anything about them, one of them remarks to the other, "Like, she does the whole cute act, but she's actually a bitch (ブリっ子・burikko) inside."

Afterwards, Hina apologetically declines the confession of the boy with glasses, who is possibly Kojima, then declines an invitation to study with other girls to instead study alone at home with an anime in the background where the young characters encourage one another to do things high schoolers would do.

Hina next dreams about her first day in high school. She sees Tomoko's name in her class and wonders if she remembers her from the exam. Okada notices that they are in the same class and offers to go with her to it. As they walk, they introduce themselves to one another.

Hina dreams of sitting in class next to Tomoko vowing to herself that she will be able to keep up her "act." The unnamed Girl with Short Hair sits in front of Tomoko. Hina dreams of reintroducing herself to Tomoko, who responds blushing and stammering.

Hina gives her full name and tells Tomoko she better remember it "this time."

Hina begins to stir and hear Tomoko and Okada. Tomoko explains that Yoshida always sleeps here, "showing off her panties," and Okada volunteers to wake her if she will wake Hina.

Hina's eyes open to see Tomoko crouch down in front of her. Hina springs awake to cover herself and scold Tomoko who protests that Hina's unmentionables were in plain sight.

Tomoko observes that by sleeping in the school courtyard, Hina seeks anime cliches. After they walk a bit with Yoshida stretching, Hina returns to Tomoko's observation. She confesses that she really does enjoy "slice-of-life" anime, and now that she is a third year, she wants to experience as many cliches as possible: "I want to live the slice-of-life anime lifestyle."

Tomoko asks her what kind of life is the "slice-of-life" anime lifestyle. Hina admits that she is not sure, but feels it involves, "everyone gets along and no one talks behind each others backs or gets bullied, or anything." Tomoko suggests that Hina is already living that lifestyle since she does not remember Hina doing any such things. Hina explains that while that is true, she finds it easier since she does not have to "put up an act." Beaming, she declares that her life is a "four-season slice-of-life anime" in which Tomoko and the others are main characters.

Inwardly, Tomoko confesses the urge to play with Hina by saying, "you know you've been acting like one of those cringey middle school otaku recently," but would feel bad seeing how happy the smiling and blushing Hina appears.

Tomoko remarks to Hina that her "panty flash" (パンチラ・panchira) earlier would be too graphic for a "slice-of-life anime." She helpfully explains, "I mean, from that angle, I could tell your panties were riding up pretty hard," and if Hina had turned even a little, "I'd have seen everything." She then reassures Hina that since she "grooms" herself, it would be fine. Inwardly, Hina fumes on how Tomoko would know how she grooms herself, and why she would even remark on it. She then wonders if Tomoko looked during their field trip. Tomoko senses her anger: "I thought we'd gotten closer recently, but maybe this was a little too personal!"

She offers that Hina would not have to worry since, "I could tell yours was a pretty pink color!"

Hina responds by slapping her, then she becomes apologetic. Inwardly, Okada is surprised by Hina slapping Tomoko. For her part, Tomoko is only mildly upset that one of Hina's fingers hit her eye: "You know, if you want to live the slice-of-life protagonist lifestyle, you need to get better at aiming those slaps." Hina is surprised that Tomoko is not mad she hit her. Tomoko explains that she is use to it from Yoshida and Yuri. She asks that when Hina hits her she tries not to leave a mark. Hina suggests that Tomoko lives more of the anime lifestyle. 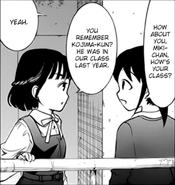 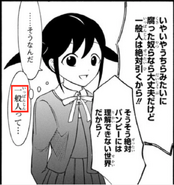 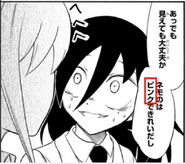 Hyperliterally: "Because Nemo's is pink and beautiful!" 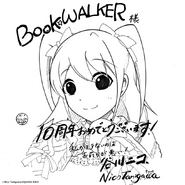