Megumi Imae walks with Ogino in the corridors of the high school as she apologizes for her family's dog bothering the school. Ogino pleasantly suggests that perhaps the dog keeps coming to the school since he thinks his "owner" (飼い主・kainushi) is there. Megumi explains that her family does not know how the dog keeps getting out, then adds that he has a collar. Ogino notes that Megumi's mother usually comes to the school to collect the pet and asks her if she is off from college. Megumi replies in the affirmative. Ogino continues that dog has become very popular due to his frequent visits, and the students have even given him a name. Megumi promises to discipline her pet.

Wada then kneels down and pets the dog. Walking by, Suzuki asks Kiyota what is up with the dog. Kiyota explains that he knows of the dog. As they walk away with Wada joining them and waving at the dog and Megumi entering the frame behind the dog, Kiyota explains that the dog has a reputation for putting his head up girls skirts. In fact, he got one of the girls from their class, but he does not know which one. Suzuki asks if the dog is a pervert (変態犬・hentai inu) then wonders if the owner is a pervert (変態飼い主・hentai kainushi) who trained him that way. 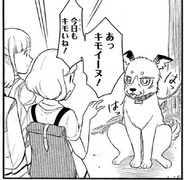