On Christmas Eve, Tomoko leaves to go out shopping as her mother reminds her that her father will bring home cake. Tomoko promises to return before dark. She enters a game store and decides to try a "BL" or "boy love" game even though she really is not into the genre. By buying the game, Tomoko gets the chance to win a prize. She wins Third Prize: "Super Vibration" or a hand-held "personal massager!"

Around 2 A.M. Tomoko wakes up somewhat surprised to be in bed. She looks out the window to see snow falling. She thinks, "Merry Christmas." 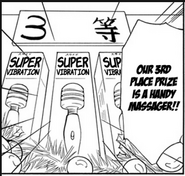 WataMote Wiki advises that use of this in a manner other than as a "handy massager" violates its warranty.