Blue-Purple
Yuri Tamura (田村 ゆり, Tamura Yuri?) is Tomoko's classmate in her second then third year in high school. She first really meets Tomoko during class when the teacher puts her, Yoshida, and Uchi in Tomoko's group for the school field trip to Kyōto.

Prior to meeting Tomoko during their field trip, Yuri's apparent only friend was Mako. Through this field trip she becomes an acquaintance of Yoshida and meets Uchi. She remains very untrusting of people, and she often sets up obstacles that can push people away. She appears aware of this tendency, and she confesses to herself that it bothers her. Her development is similar to Tomoko's in that she has social anxieties and avoids interactions with others, particularly ones she does not know, or who do not persist in being with her despite the obstacles she raises.

Yuri initially appears calm and collected, often acting as mediator between Tomoko and Yoshida. She exhibits kindness when she tries to befriend Tomoko by inviting her to eat lunch, despite there being no obligation to continue a friendship. In recent chapters, it is shown that Yuri is an introvert who prefers to have a small group of friends. She used to rely solely on Mako for most of her social outings but now that circle has extended to include Tomoko and even Yoshida. Yuri appears uncomfortable sharing Tomoko, Yoshida, and Mako with others. In Chapter 124, Yuri reveals that she feels insecure and jealous whenever someone outside her small circle of friends seems to share a closer bond with either Tomoko or Mako. She is aware of this. After meeting Yū Naruse, Mako remarks that she seems like a "nice person," to which Yuri replies "unlike Kuroki-san and me." She tests her friends which seems to either satisfy her or drive them away.

Nevertheless, she becomes upset when others ignore her or slight her, which may explain her need to test her friends. She also becomes upset when others recognize aspects of herself she does not want to admit. As noted, she punches Mako in the arm when she explains to her how she is acting just like the mean-spirited gossip Minami. When Uchi wants to ride a roller coaster again, secretly hoping to sit next to Tomoko again, she ends up next to Yuri who hates roller coasters. Uchi ignores her and declares the ride boring to Yuri's irritation. The next time they ride together, Yuri angrily pinches Uchi's arm, making her scream. When Tomoko politely tells her she does not have to force herself, she reacts by elbowing Tomoko hard in her arm.

During the trip to the amusement park Yuri admits to Hina Nemoto that she does not really like her. Subsequent to that trip, Yuri develops an antagonistic relationship with her over their respective friendships with Tomoko. Both engage in petty sniping, such as Yuri interrupting Hina during lunch to reveal she does not know about Tomoko's brother. In Chaper 136, she borrows a manga from Tomoko that causes a number of other girls including Yoshida to cry over the ending. Despite reading it a few times at home, she does not cry, and she wonders if she is like Koharu Minami.

During the intramural ball tournament that takes place between Chapters 148 to 154, Yuri privately asks Tomoko to help her practice table tennis. She does succeed in winning a match, which she needles Hina and Tomoko with, then suggests to Tomoko, Hina, Katō, and even Shiki Futaki that they have other opportunities to share in class activities, only to retreat a bit back in her shell by claiming that she "does not care." In Chapter 163, she mentions to Tomoko and Mako that she has received text messages from boys wanting to ask her out, but she just ignores them.

Yuri has black hair which she puts into two low pigtails. Her eye color depicted on the cover for Volume 13 is blue to purple. She is lean and the statistics contained in the Volume 18 Special Edition list her height as 160 cm or 5'3". Yuri usually maintains a calm to disinterested demeanor; however, when upset she can look stern.

Tamura and Tomoko develop something of a friendship during their school trip, although at the time Tomoko does not consider her a friend. Tamura acts considerate and friendly towards Tomoko despite thinking that she is stupid for aggravating Yoshida by calling her a delinquent. On the third day of their trip, Tamura goes out of her way to invite Tomoko to hang out. Tamura's friendliness toward Tomoko extends to their return to school where she invites Tomoko to eat lunch with her and her friend. Yuri is happy to see Tomoko in her class in her third year.

In later chapters Yuri appears to value a small group of friends. In Chapter 120, after reluctantly attending a party, she admits she wants to spend more time with Tomoko, Mako, and Yoshida. She becomes strangely jealous when other friends intrude. Thus, when she encounters Yū Naruse with Tomoko, Yuri reacts by trying to embarrass Tomoko in front of Yū. It appears that Yuri either wanted to separate Tomoko from Yū or drive Tomoko away.

She continues this behavior during the trip to the amusement park. Rather than talk frankly to Tomoko, she tests her by demanding to know if Tomoko knows her first name. For her part, Tomoko recalls it with some mental searching. By the end, Tomoko can get Yuri to talk even if she, herself, finds Yuri's introverted personality frustrating to deal with. For her part, Chapter 136 reveals that Yuri knows she has issues with empathy and relationships. She borrows a manga with an ending that makes a number of girls cry, including Tomoko. When it will not make her cry, she fears that Tomoko is not like her, and that she, herself, is more like Minami.

In more recent chapters, Yuri appears quietly concerned that Tomoko seems to make new friends to even talking with people she does not know well at all as opposed to her own difficulty. This comes to a head in Chapter 144 where she observes Tomoko converse with Uchi then even converse with a boy, Wada. When she learns of Tomoko's interest in Katō's choice of a college, she addresses Tomoko as "Tomoko." Tomoko initially replies with a quiet "Yu-Yuri" which she corrects with a more emphatic "Tamura-san." While it appears that Yuri is hurt that Tomoko considers another school, she inwardly reveals that after Tomoko privately addressed her as "Yuri" in Chapter 138 she had finally summoned the courage to call Tomoko "Tomoko." When Tomoko tries to learn what upset her, Tomoko reacts to Yuri's refusal to discuss the real reason by accusing her of "embarrassing" her by calling her "Tomoko." Yuri retorts that she should find Hina and her and calling one another "Kuro" and "Nemo" embarrassing. Nevertheless, in a much later chapter, Tomoko will refer to her as "Yuri-chan" to Hina.

At Tomoko's suggestion, she agrees to attend a Summer Study Camp. She ends up sharing a room with Emiri Uchi and Asuka Katō. One of Uchi's set of friends, Nagi, invites her to the hot spring. Yuri talks with her and other members of the "Emoji Group": Miyazaki, Kayo, and Kaede. Later, Yuri appears pleased that she is able to talk to a group of girls without Tomoko and Mako, and she gives some credit to Tomoko's influence. For her part, Tomoko still inwardly views her as "gloomy morose (ネクラむっつり・nekuramuttsuri)."

Yuri and Mako are close friends who eat lunch together very often. However, in Chapter 69, Yuri was angry with Mako for joining someone else's group. She continued to be upset for most of the trip until near the end where they made up. After the trip, they continue to eat lunch together at school with the addition of Tomoko. Mako tries to guide Yuri. When they meet Yū and Yuri starts trying to embarrass Tomoko, Mako takes her aside to suggest that she is acting like Koharu Minami. She takes Yuri in tow to console Yoshida after she is publicly humiliated. In Chapter 163 she reveals that Mako briefly had a boyfriend in her first year of high school.

Yuri and Yoshida have a stable relationship, but they do not appear close friends for much of the series. They hang out a few times after the school trip such as during the sports festival in Chapter 88 and walking to school together. Aside from those few instances, they return to their other friends, with Yuri choosing to invite Tomoko to have lunch almost everyday. Nevertheless, Yuri is happy to see Yoshida in her class in her third year. When they travel to the amusement park in Chapters 125-130.5, while she becomes reticent to offended that other girls enter the group with Tomoko, she neither resents nor opposes having Yoshida join their group. Indeed, in Chapter 151, after spending the afternoon at an arcade with Tomoko, Yuri suggests that they come back with others including Yoshida. During Yoshida and Tomoko's suspension, she texts Yoshida to see if she is alright and if she needs anything.

The two spend the most time together during the field trip to the amusement park in Chapters 125-130.5. When the two are alone in Chapter 130.5, Hina frankly asks if Yuri hates her. Yuri responds that she does not, but she does not exactly like her either. Her dislike of Hina becomes clearer in Chapters 132-133 when she becomes upset that Tomoko agrees to have lunch with Hina, and Yuri then refuses to join them. She ends up sitting behind Hina and interrupts her to show she knows more about Tomoko. For her part, Hina becomes progressively irritated that Yuri keeps interrupting her. She takes the opportunity to poke and tease Yuri. In Chapter 144, she tries to tease Yuri that she will be lonely when her new class seating separates her from Tomoko, Mako, and Yoshida. Nevertheless despite their apparent rivalry, in the same chapter she notices that Tomoko upset Yuri and instructs Tomoko to go to her to apologize.

Their rivalry persists. As noted above, Hina enjoys poking Yuri regarding her conception of status with Tomoko. This backfires on Hina when Yuri smugly informs her that she spent a fun day alone with Tomoko. When they meet after Summer Break, Yuri purposefully insults her, but inwardly admits that she does not hate her, she merely does not know how to relate to her.

As a member of Emiri Uchi's "Emoji Gang," Nagi does not have much direct interaction with Yuri until they both attend the Summer Study Camp during their third year. In class, Nagi invites Yuri to bath in the hotel's hot spring. Yuri ends up sharing the bath with Nagi and other members of the "Emoji Gang" sans Uchi, and she finds herself surprised that she can talk freely with the girls. Later, when Miho Narita encourages all of the "WataGirls" attending the Study Camp to shout out to the sea, Nagi smiles when Yuri blushes and mutters a "do our best," and she shares in that cheer.

Yuri depicted in color on the cover of Volume 8.

Yuri depicted in color in Chapter 132.

Yuri is upset after her fight with Mako. 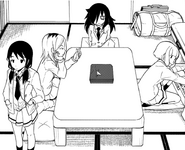 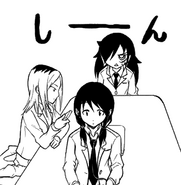 Yuri is angry at something Mako did.

Yuri's lack of reaction concerns her in Chapter 136.

Yuri's Eyes as depicted on the cover of Volume 13

Demure Yuri in Color on the cover of Volume 14. 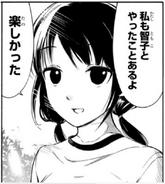 Yuri calmly informs Hina that she and Tomoko enjoyed playing darts together in Chapter 151 . . . 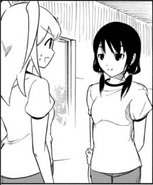 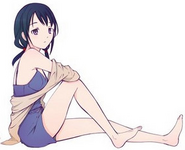 Yuri in Color!:
Official artwork created for the release of Volume 15.

Drawn by the Artist as part of the release of Volume 15 - with Cat Ears!

Another drawing by the Artist for the release of Volume 15.

Probable First Second Appearance
In Chapter 49
Credit Where Credit is Due Department: spotted by SteveBrandon. However, the subsequent recreation of the cover page of Chapter 20 suggests she first officially appeared on that cover.